Researchers have identified a key enzyme in astrocytes that turns on during the progressive stage of multiple sclerosis, apparently boosting the local immune response and promoting neurodegeneration. The team is following up by testing a repurposed drug that targets the enzyme in mice and human cells.

In the brain and spinal cord, neurons are the undisputed heads of state, the red-carpet celebrities, the pop-icon pinups. They shape who we are, how we think, what we do, and how we know where we are. But astrocytes are gaining a small measure of fame for the power they wield behind the scenes. In health and disease, they control the function and fate of neurons and other cells in nuanced ways that scientists are only beginning to understand.

Recent findings add a new twist to the astrocyte story in multiple sclerosis (MS). Astrocytes, a new study reports, may be a potential target for secondary progressive MS (SPMS), which causes the greatest disability and for which there is no effective treatment. Most people with relapsing-remitting MS (RRMS), the most common form of the disease, eventually move on to the steadily worsening SPMS. Most available therapies treat RRMS by reducing the rate or severity of immune attacks.

In the progressive stage, researchers have found, some astrocytes seem to switch on genes that drive chronic inflammation and neurodegeneration. One particular fatty molecule, lactosylceramide (LacCer), as well as the enzyme (B4GALT6) that makes it, fuel the destructive pattern by turning on a signal to recruit inflammatory monocytes from the blood, experiments in mice and with human brain tissue suggest. 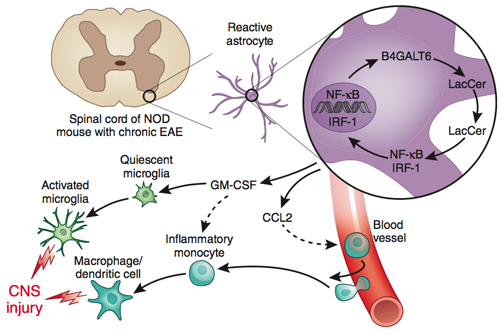 Importantly, inhibiting the enzyme in mice can suppress the neurotoxic astrocyte activation, Francisco Quintana, Ph.D., and his colleagues at Brigham and Women’s Hospital and Harvard Medical School in Boston report. Their paper was published online September 14 in Nature Medicine (Mayo et al., 2014).

“This is a very important and innovative step forward in understanding how astrocytes get activated and control the influx of inflammatory cells in neurological diseases such as multiple sclerosis,” Ben Barres, M.D., Ph.D., of Stanford University wrote in an email to MSDF. Barres was not involved in the Nature Medicine study. “The mechanisms that control glial activation in brain disease are poorly understood, and this paper highlights a critical role for the glycolipid lactosylceramide in this process. It has the potential to lead to new therapies by controlling unwanted inflammatory cell infiltration.”

Quintana won a grant last month in the first round of funding from the International Progressive MS Alliance to explore the enzyme as a therapeutic target. “We are trying to investigate whether drugs already available for human use can be repurposed to target this specific pathway," he wrote MSDF in an email.

One drug Quintana and his colleagues will be testing is miglustat (Zavesca, Actelion Pharmaceuticals), a second-line option for mild or moderate Gaucher's disease, a condition in which certain fatty molecules made by the body are not broken down normally. The small open-label trials that led to U.S. Food and Drug Administration approval reported some serious adverse events, including peripheral neuropathy, new or worsening hand tremors, diarrhea, weight loss, and low blood platelet count, according to the latest label (PDF) at Drugs@FDA.

The team will be testing miglustat and other molecules that inhibit the B4GALT6-LacCer pathway in mice and in human cells. They will also be trying to understand more details about the mechanism and to develop biomarkers to monitor the pathway, Quintana told MSDF.

“The findings by Mayo et al. provide a basis for targeting astrocytes, in particular LacCer signaling, as an alternative to most existing MS therapies, which modulate the immune system,” Abdolmohamad Rostami and Bogoljub Ciric at Thomas Jefferson University of Philadelphia, wrote in a commentary on the paper published online on October 8 in Nature Medicine (Rostami and Ciric, 2014). “In particular, this approach holds promise for developing treatment for progressive MS, which at present is poorly managed clinically.”

By several measures, astrocytes rule the roost in the central nervous system (CNS), outnumbering neurons by more than 5 to 1, according to rough estimates (Hamby and Soforniew, 2014). Astrocyte endfeet form and maintain the blood-brain barrier, covering more than 90% of the cerebral blood vessels, and astrocytes can secrete factors that inhibit or enhance myelination (Lundgaard et al., 2014).

A growing appreciation of astrocytes was on full display at the American Society for Neurochemistry (ASN) March 2014 meeting. Several sessions showcased the emerging story of their specialized and diverse functions, including evidence that activated astrocytes can both heal and harm the CNS. “Astrocytes have never been more popular,” keynote speaker Michael Sofroniew, M.D., Ph.D., a neurobiologist at the University of California, Los Angeles (UCLA), told MSDF.

The non-neuronal brain tissue known as glia has long been seen as “a big blob,” said ASN president Etty (Tika) Benveniste, Ph.D., of the University of Alabama, Birmingham, in an interview with MSDF at the ASN meeting. Astrocytes are one of three main types of glial cells, which also include the local innate immune cells called microglia and the myelin-making oligodendrocytes. Not only do the glial cell types have crucial distinctions among themselves, Benveniste said, but “we need to appreciate now that an astrocyte is not just an astrocyte. It’s a particular type of astrocyte distinguished by cell surface markers, transcription factors, and location. It will likely have a certain function under normal conditions and in a disease state.” Although astrocytes have been “a tough nut to crack,” scientists are developing new tools for studying them, with unexpected results.

In MS, for example, reactive astrocytes had long been derided for forming scar tissue around new lesions, Sofroniew told MSDF after his talk. Yet they may be trying to protect the rest of the tissue by walling off invasive inflammatory T cells in lesions in the relapsing form of MS. When he teamed up with UCLA colleague Rhonda Voskuhl, M.D., to eliminate scar-forming astrocytes in mice with experimental autoimmune encephalomyelitis (EAE), the inflammatory CNS disease was so much worse than normal that the veterinarians made them terminate the experiment early (Voskuhl et al., 2009). And in the brain, astrocytes are the cellular home of aquaporin 4, the target antigen in another CNS autoimmune demyelinating inflammatory disease, which distinguished neuromyelitis optica, once thought to be a variation of MS, as a separate disease with different optimal treatments.

The motivation for the new study came from the lack of treatments for SPMS, Quintana told an audience of more than 200 people at the Cold Spring Harbor Laboratory glia meeting in July, where he presented preliminary results of the study. “The pathological mechanism may change in the course of the disease,” he said, perhaps explaining why drugs for RRMS do not seem to affect long-term progression and disability.

Intrigued by a hint from an earlier paper (Farez et al., 2009) that astrocytes may play a pathogenic role in SPMS, Quintana’s team returned to nonobese diabetic mice (NOD) to develop a better progressive MS model of EAE. When the NOD mice are immunized against myelin peptides, they experience an acute attack, followed by progressive and irreversible accumulation of neurological impairment that mimics some aspects of the clinical course of MS and the spinal cord pathology in people. The team bred the NOD EAE mice with a popular standard mouse model (C57BL/6) that develops a form of EAE that resembles a single RRMS attack. The hybrid offspring developed a chronic progressive form of EAE. Finally, using another genetic trick, the authors found a way to deplete certain white-matter astrocytes, allowing them to compare the effects of astrocyte depletion in each phase of disease.

Similar to what Voskuhl, Sofroniew, and others have reported, Quintana’s team found that acute EAE worsened without reactive astrocytes. Surprisingly, the opposite was true in the chronic phase. Mice improved when reactive astrocytes were depleted in the progressive phase.

The researchers isolated the astrocytes from the mice and compared the gene transcription patterns during different EAE stages. One of the genes that displayed increased expression during progressive versus acute NOD EAE was B4galt6, which encodes an enzyme that makes LacCer, a glycolipid others have implicated in the pathology of experimental spinal cord injury. In the NOD EAE mice, an inhibitor of the enzyme, given during the chronic phase, improved the clinical score and reduced demyelination and axonal loss.

With that discovery, the enzyme B4GALT6 became the center of attention. It was upregulated in astrocytes in the progressive phase and could be inhibited in mice to ameliorate the chronic CNS inflammation, Quintana told MSDF.

Next, the team explored the role of LacCer. On one hand, mice given LacCer got sicker. On the other hand, in complementary experiments, reduction of LacCer synthesis by two different methods reduced disease progression in the mice.

Delving deeper, Quintana’s team found that LacCer turns on expression of CCL2, a molecule that recruits inflammatory monocytes to the CNS. Results from multiple experiments indicate that B4GALT6 and LacCer ultimately push resident microglia, as well as immune cells that infiltrate the CNS, to a proinflammatory state.

In another set of experiments involving activated human astrocytes in culture, the researchers found that inhibiting B4GALT6 turned down proinflammatory gene expression.

Astrocytes as a new target

Many questions remain about how LacCer from astrocytes is promoting chronic inflammation. “The critical next step will be to understand if lactosylceramide acts directly on an as-yet unidentified receptor or instead acts as a precursor for another lipid that activates glial receptors,” Barres wrote in an email to MSDF.

Tools to study astrocytes may be lagging, but Quintana’s team has contributed four new methods for the transcriptional characterization of astrocytes, for astrocyte isolation, for analysis of cells (reporters and deletion) in an animal model of SPMS, and for astrocyte-specific knock-down of genes of interest, he told MSDF.

“It’s an original and exciting story,” said Erhard Bieberich, Ph.D., a neuroscientist who specializes in astrocytes and lipids at Georgia Regents University in Augusta. Other lipids are made in the same metabolic pathway and are worth investigating for their role in pathology, he suggested.

“LacCer is not a bad lipid per se, but in this case it seems to be making the astrocyte behave badly,” Bieberich told MSDF. “I don’t know if it can be tamed into something useful, but maybe it can be stopped from aggravating the inflammatory cascade that goes on between cells that throw cytokines at each other and worsens the conditions. When that happens, usually it's the neurons that are going to die.” Treating neurodegeneration ultimately may require a cocktail of several compounds targeting different mechanisms, he said, and it’s logical that inhibiting lipid biosynthesis may be one.