A conference in Cambridge, Massachusetts, outlined progress and challenges in turning computational modeling into actionable knowledge in MS and other brain disorders

I’d like to tell you about a conference that Orion Bionetworks hosted at the Broad Institute in Cambridge, Massachusetts, on June 12, 2015. Orion Bionetworks is a nonprofit computational modeling company focused on multiple sclerosis and other brain disorders, and this was our second annual conference.

Magali Haas, Orion’s founder, CEO, and president, presented a strategic overview and road map of Orion's activities. She provided a compelling case for shifting the paradigm of translational science to one that embraces complexity and that reverse-engineers disease from human data via next-generation technologies that measure biosignals and biomarkers. Finally, she described how the Multiple Sclerosis 1.0 Bionetwork Program brought together multidisciplinary partners from academia, the computational and bioinformatics industry, nonprofits, and patient-powered networks to create the world’s largest MS biorepository and build the first predictive multidimensional disease models of MS. Early results of the MS models are promising, and there are significant opportunities to extract deeper insights with further study of the models.

A significant portion of the day was devoted to presenting Orion’s MS 1.0 results publicly for the first time. MS is a complex disease that is driven by both inflammation and neurodegeneration, and basic questions concerning patient-population heterogeneity and specific molecular drivers of progression in MS remain unanswered. For example, molecular biomarkers of disease could yield insights into patient stratification that is defined pathogenically, rather than clinically, allowing patients to get on the right treatment faster.

Understanding the molecular underpinnings of MS could also shed light on new drug targets and treatments. Moreover, molecular biomarkers of disease may yield insight on what constitutes a relapse and eventually allow for accurate predictions of time to relapse, letting patients and physicians work together on appropriate preventive measures. Orion used a tour de force of data and modeling talent to model both patient-reported data and clinical- and biofluid-derived data from the Brigham and Women’s Hospital CLIMB longitudinal study in MS to build biomodels to start answering some of these questions.

Orion collaborated with PatientsLikeMe (PLM), an online community for people with life-altering illnesses, to analyze their MS population of over 30,000 patients, yielding some fairly provocative results. First, PLM established that their disability scoring system correlates well with the EDSS, a widely used clinical measure for disability used in clinical trials, and is therefore a relevant method of tracking patient health. Diving into the patient-reported data showed that relapses are generally characterized by an increase in the number of disabilities rather than the worsening of a single disability. For example, a patient suffering from difficulty controlling hand movements will likely experience a disability in another motor or sensory modality rather than a worsening of hand dexterity. This new finding allows for a deeper understanding of the evolution of disability in people with MS.

To better treat MS, we must understand the cellular underpinnings of a relapse. Orion worked with Thomson Reuters to build a pathway-driven model on demographic, genomic, and clinical-outcomes data from the CLIMB study to identify 56 pathways and 26 subnetworks associated with time to relapse in MS. A k-means clustering analysis identified three distinct stratified patient cohorts whose pathway expression patterns were associated with high, medium, or low risk of relapse. 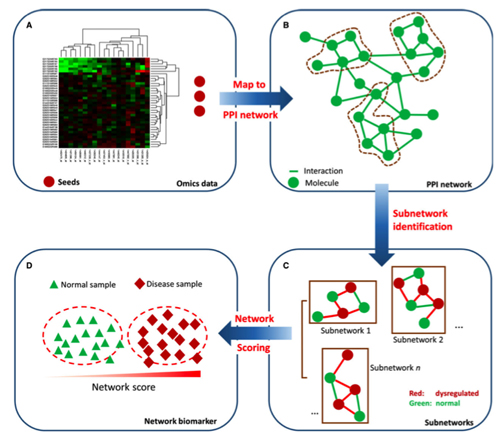 Interestingly, the investigators found that changes in Notch signaling, which are usually associated with neurogenesis and neural plasticity, were associated with faster time to relapse in MS. These results indicate that integration of prior pathway knowledge and patient gene expression data led to improved, more robust molecular signatures for patient stratification biomarkers.

To better understand the causal biology of MS, Orion and GNS Healthcare built a data-driven model from CLIMB data, which was presented at the meeting by Keith Elliston, consulting scientific director at Orion, and Boris Hayete of GNS Healthcare. Using Bayesian inference to go beyond correlations and make causal inferences between data nodes, the Orion MS 1.0 model uncovered novel genetic drivers of MS as well as new gene expression pathways that may also contribute to disease outcomes. Considering that MS disproportionately affects women, it is interesting that the model revealed the involvement of sex-linked genes in disease progression. The model is expansive and currently under rigorous study to better understand new drivers of MS. It has been integrated with a suite of software packages such as Cytoscape, a network visualization software, and NDEx, to allow for big-data mining. Additionally, Orion Bionetwork’s partner, Exaptive, a data-visualization company, created an interactive interface for the model, allowing users to simulate and interact with the model in real time. Also, to seamlessly cross-reference hits from the model with the scientific literature, Orion partner Virtual Rx established an interface with their cybernetic natural language processing knowledgebase, Charisma.

Orion would like to make model results public and is working on several academic publications as well as a web interface for users to interact with model results.

The Orion MS 1.0 model has yielded interesting results that will be confirmed in the Orion MS 2.0 plan. Orion would like to validate the patient-powered data model as well as the pathway-driven and data-driven models by monitoring patients in real time to derive a deeper, more holistic view of MS. The remainder of the conference focused on next-generation technologies that allow for expansive, multidimensional data sets of a patient’s disease status. Orion is planning to use patient data collected from innovative wearable technologies and newly designed biomarker assays to build its MS 2.0 biomodels. We hope our validation studies along with our next-generation biomodels will yield novel clinical/pathology-based insights and lead to the development of decision tools for patients and doctors. The landscape for big data collection and the state of big data in MS and other neurodegenerative diseases were discussed at length at the conference.

Participants discussed the benefits of uniting brain-disorder research silos to gain better understanding of the common biological mechanisms that drive disease. They also discussed big data and patient empowerment in the age of wearable technologies. In particular, the Italian MS Society presented work in which they armed MS patients with wearable devices to track disease progression in real time, using metrics such as typing patterns and interactive surveys. They plan to use this data to make tools to predict relapses and drug response. Conference participants pointed out that patients would like to be more involved in their own clinical outcomes, and wearable technologies are a prime platform for this.

Big data will bring us closer to personalized medicine, but brain-disorder care is not there yet. With MS and other brain diseases, physicians are forced to treat the disease rather than the patient due to lack of knowledge of the underlying disease process and the heterogeneity of disease progression. Large, systematic molecular studies of disease in human populations are needed to reveal these disease processes. A conference panel on precision medicine pointed out that large-scale studies currently underway could be greatly improved if researchers would adhere to harmonized protocols for collecting and processing biospecimens. This will allow data to be more easily compared across studies and diseases and will lead to a deeper understanding of the overlap in disease pathogenesis across brain disorders.

To find cures and better treatments for brain diseases, such as MS, one must grasp what has already been discovered and build on these results. Conference speakers shared that much has been reported at the discovery phase in brain diseases, but most of these results remain to be validated. Conference speakers presented bioinformatic tools for organizing research findings into knowledge bases that can be used to converge findings across papers and convert big data into knowledge. Moreover, these tools are able to integrate new data with published findings, thereby creating ecosystems for model building and hypothesis testing.

The conference was packed with presentations from patient advocacy groups, brain disease diagnostic experts, wearable-device designers, and computational modelers. Orion plans to harness the power of collaboration within this diverse collective of experts to improve treatments and patient care in MS and other brain disorders, accelerating the path forward to cures.

Orion Bionetworks would like to thank the sponsors of the 2nd Annual Conference, our Silver Sponsors, Biogen and Janssen Pharmaceutica, and our Bronze Sponsors, IMEC, Octave Biosciences, PatientsLikeMe, Takeda Pharmaceuticals, and Thomson Reuters.

Allison Provost, Ph.D., is Scientific Program Manager at Orion Bionetworks. She can be reached at allison.provost@orionbionetworks.org.

This is very encouraging and everyone in this world associated with science is diving into 'big data', as they should.

There are gaping holes in this quest, unfortunately, since there are literally no resources for the average 'Joe on the street' (think of a computer geek who does machine learning, for example, for a living) to delve into MRI data, data from OCT (optical coherence tomography) or any of the numerous biodata banks - none is available in the open, if available at all. MRI of brain data, for example, are conspicuous by their absence even for strokes (the commonest malady in ALL of neurology) let alone for multiple sclerosis, the disease.  Can we boast of the NINDS or the NMSS providing MRI data banks in their respective domains open to the public ? Can I land my hands on DWI images of 100 stroke patients for example ? If yes, I want to know where that data are hidden ! There are none ! That is the state of affairs of 'big data'.

Big data analysis comes from providing, out in the open, DATA that can viewed, dissected, evaluated, teased out, and cut up in a thousand ways by anyone interested in playing with datasets. Unless medicine wakes up to this simple fact, discoveries will remain a distant mirage.