SAN DIEGO—Once thought to be a variant of multiple sclerosis, neuromyelitis optica (NMO) bears similar pathophysiology to that of MS. But unlike MS, researchers have identified the cause of NMO: circulating antibodies to aquaporin 4 (AQP4), an astrocyte protein that passes water across the cell membrane. Despite NMO’s known etiology, much remains unknown, such as how antibodies affect cells at the blood-brain barrier (BBB), or how they breach the protective barrier to the central nervous system.

Yukio Takeshita, M.D., Ph.D., and colleagues at the Cleveland Clinic in Ohio tackled these questions with a novel in vitro coculture model of the BBB. Takeshita presented the results in November at this year’s meeting of the Society for Neuroscience in San Diego. 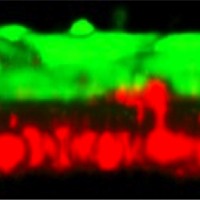 In the new culture model, first developed by Takeshita, epithelial cells and astrocytes from human cell lines grow facing one another on a thin membrane in a dish. “This structure is very similar to the real BBB,” Takeshita said in his presentation of the model, which recapitulates “vascular” and “intrathecal” sides of the BBB. Takeshita and his team collected plasma from NMO patients and isolated the IgG-containing fraction (NMO-IgG)—which contains AQP4 antibodies—and then applied this elixir to either side of the model BBB.

NMO-IgG applied to the vascular side of the BBB model caused epithelial cells to increase expression of ICAM1, an adhesion molecule, and IgG to accumulate at the membrane in cultures containing either astrocytes that expressed AQP4 or those that did not. Those findings indicated that epithelial cells were directly activated by the NMO-IgG and signaled to astrocytes independently of AQP4.

When applied to the intrathecal side of the membrane, only AQP4-expressing astrocytes responded to NMO-IgG with increased expression of IL-6 and decreased claudin-5, a protein that contributes to tight junctions between cells. In order to directly measure the model barrier’s permeability to leukocytes, the researchers moved the cell structure to a customized three-dimensional flow chamber, which showed that more leukocytes transmigrated across the barrier in cocultures containing AQP4-expressing astrocytes. “Intrathecal application of NMO-IgG decreased the barrier function,” Takeshita said.

The authors concluded that NMO-IgG communicated directly with epithelial cells and affected barrier integrity independently of AQP4, and that additional AQP4-dependent signaling led to astrocyte activation and feedback signaling to epithelial cells, further contributing to BBB failure. The work sheds new light on the details of NMO pathophysiology, and the new model provides a potentially valuable new tool for studying other questions related to the BBB.

The authors had no disclosures to make. The research was supported by funding from the Guthy-Jackson Charitable Foundation and the National Institutes of Health.

Mechanisms for breakdown of the BBB in MS are poorly understood, but appear to involve cytokines/ chemokines and cytokine/chemokine-dependent leukocyte mediated injury. The other problem with BBB studies is that there is no single model (ex vivo) that replicates the in vivo model and hence has been tradiitionally difficult to understand. There are no specific tests other than MRI with gadolinium to evaluate for breach of BBB.