In what may be the first demonstration of myelin repair in people with multiple sclerosis, an old antihistamine shows modest improvement in the function of chronically demyelinated optic nerves.

Thanks in part to a close collaboration between a scientist and a physician, the prospect of myelin repair therapy in multiple sclerosis (MS) is better than it has ever been. A new study of an old antihistamine may be the first demonstration of effective myelin repair in people, a finding strengthened by follow-up studies in mice. And it probably set some kind of new speed record in moving a science discovery into the clinic for testing.

The randomized double-blind study tested the antihistamine clemastine in 50 people whose relapsing-remitting MS also included long-standing visual system damage known as chronic demyelinating optic neuropathy. The preliminary findings of the phase 2 trial will be presented on Tuesday, 19 April 2016, at the American Academy of Neurology meeting in Vancouver, Canada. 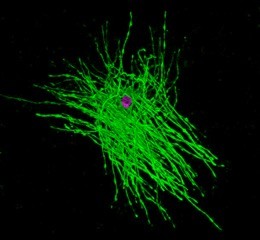 The study met its main endpoint, a small but measurable improvement in the speed with which electrical signals travel from the eye to the brain and back—a repair biomarker known as visual evoked potentials (VEP)—while people were taking the drug.

That’s better than early stage results from other experimental agents, which at best may have slowed, but not reversed, other measures of disability and nerve damage, according to scattered reports at meetings.

But it’s not a slam dunk for researchers, doctors, or patients hoping for something now, rather than later, to stave off the worsening disability and neurodegeneration that happens when nerves lose their protective myelin coating. The 13 disease modifying drugs for MS now approved in the United States target the immune system and aim to reduce the damage in the brain and spinal cord. No cure has been developed, and no drugs have been proven to repair myelin or protect neurons from degeneration.

“We’re unbelievably excited by the results, but being excited isn’t enough,” said Ari Green, MD, medical director of the University of California, San Francisco, USA, MS center, who led the clemastine study. “We have to do this in the right way. The promise is to deliver drugs that are potentially capable of neural repair in people with longer-term injury. That’s the big unmet need in this field. This is one step down that path.”

Not my darling: Clemastine

Despite the positive results, clemastine may not be anyone’s favorite candidate to go the distance in large clinical trials for remyelination. At the relatively low doses in the study, people reported a mild worsening of fatigue. At higher and more effective doses for myelin repair, clemastine has more serious known side effects on the heart and bladder. “At the doses we can imagine using, it is likely to be only partially effective,” Green told MSDF.

Instead, the clemastine trial may offer a window into a promising approach for remyelinating therapy and generate support to develop more effective drugs with fewer side effects, the authors and other experts told MSDF.

“I’m extremely encouraged that the results were not negative and that the drug did not induce toxicity,” said chemical biologist Luke Lairson, PhD, an assistant professor at The Scripps Institute in La Jolla, California, and an investigator at the California Institute for Biomedical Research. “That would have set things back,” he told MSDF. At this stage, the biomarker evidence for remyelination in people is a major bonus, he said.

In a high-throughput screen led by Lairson 3 years ago, clemastine showed up on the list of several dozen compounds that boosted myelination in rodent neuron cultures and mouse models of MS, as MSDF reported (Deshmukh et al., 2013). The top candidate in that screen was an old drug for Parkinson’s disease, benztropine, still the most effective in his tests, Lairson said, but also fraught with unwelcome side effects.

Since then, Lairson has screened more than 200,000 compounds and continues to study about 40 other promising agents, including clemastine, paired with other disease-modifying therapies in animal models. The pairwise combination reflects the widely held belief that remyelinating drugs will need to be taken with anti-inflammatory drugs to both repair and prevent damage in MS. In combination with immune-modulating drugs, lower doses of the remyelinating candidates seem to be more effective and have fewer side effects, at least in mice. The most promising combination is with fingolimod or either of the two newer experimental agents that also target the sphingosine 1-phosphate receptors, but with fewer side effects, Lairson told MSDF. Lairson has been looking for funding to begin human studies, but it’s hard to find.

Anyone get a time on that?

In contrast, the clinical trial of clemastine at UCSF moved into clinical testing with astonishing speed, bypassing the usual months or years of waiting for the scientific paper to be reviewed and published, chatting up potential clinical partners, applying for grants, and waiting for the funding verdict.

Clemastine was the lead candidate in a new kind of remyelination screening platform developed in the lab of Jonah Chan, PhD, as reported by MSDF two years ago. The platform deploys individual oligodendrocyte precursor cells (OPCs) on a slide of tiny tapering glass micropillars similar in size and shape to axons (Mei et al., 2014). The platform reveals agents and conditions that prompt OPCs to make myelin and wrap it around the faux axons. Clemastine was an older antihistamine with a long safety record, which meant it could be tested quickly in people without the extensive preclinical and safety testing of new compounds.

Long before the screening paper was published, Green had launched the small trial at UCSF. Chan and Green, whose offices are next door to each other, credit each other with crucial insights to move the experiments ahead. They also tip their hats to department chair and co-author Stephen Hauser, MD, for the vision to put together a research team in the context of a clinical center—and for requesting a new way of doing high-throughput screening for potential remyelinating drugs.

Another key ingredient, say Green and Chan, was one couple’s philanthropy that funded the entire process, from screening platform to phase 2 clinical trial: the Rachleff family, which also endows their professorships at UCSF.

Even as it started, the clinical trial raised more questions for Chan. For example, clemastine interacts with who knows how many receptors for other possible biological effects, which may include other protective actions. How could they attribute any benefits in the clinical trial to remyelination and not immune modulation or neuroprotection of naked axons? For that matter, Chan told MSDF, everyone just assumes remyelination will restore function and protect against neurodegeneration. Even if they can find drugs to remyelinate axons, will that help people with MS?

Chan went back to the lab to test several key assumptions underlying the clinical trial. He discussed the experiments at the March meeting of the American Society for Neurochemistry (ASN) in Denver, Colorado, USA.

The story has two parts. Mainly, he wanted to find the specific drug target responsible for remyelination. That could help them develop a more effective therapy with fewer side effects. Among its many activities, clemastine’s myelin-promoting power probably comes from its role as an antimuscarinic agent. There are five potential muscarinic receptors.

He and his colleagues systematically knocked out each of the five receptors and the histamine receptor from OPCs and put them on the platform. Interestingly, cells with one particular receptor knockout were unresponsive to clemastine but precociously myelinated the micropillars anyway.

Moving to six knockout mouse models, each missing one of the receptors in their OPCs, clemastine rescued axons and prevented disability in all the models except for the key receptor identified in the screen. The receptor identity and other data will have to wait for the paper to be published, Chan said. The important take-home point is that the specific knockout of the key muscarinic receptor recapitulated the effect of clemastine, he said.

Another experiment showed that clemastine only blocked about 10 to 20 percent of the key receptor in mice at a dose comparable to that used in the clinical trial in people. “We need a more effective drug than clemastine,” Chan told MSDF.

In the process, Chan’s team realized that the target receptor antagonized by clemastine probably was a normal checkpoint that stopped OPCs from maturing and making myelin, both in the developing central nervous system and after injury to the brain or spinal cord. (In MS, pathology studies of postmortem brain tissue show some remyelination and, more importantly, plenty of OPCs around lesions that do not remyelinate, for unknown reasons.)

The identity of the receptor allowed Chan to effectively uncouple remyelination from immunosuppression and neuroprotection. It offered a way to test the fundamental value of remyelination, at least in the popular experimental autoimmune encephalomyelitis (EAE) mouse model, which mimics the inflammatory processes of MS, mostly in the mouse spinal cord. Experiments showed that EAE mice without the key receptor in their OPCs exhibited enhanced remyelination, improved clinical scores, and better axon survival after inflammatory demyelination.

“It’s a subtle point,” Chan told MSDF. “It’s proving what numerous people may say is obvious. But we did it anyway, because we wanted to make certain that remyelination could prevent neurodegeneration and may be an effective treatment for patients with MS.”

Ari Green and his UCSF team have registered two more clinical trials of clemastine. One will test the drug in people with acute optic neuritis, using the same primary outcome measure, VEP. The other will test clemastine’s effect on the vision of healthy people to assess a 1972 French study suggesting that clemastine interfered with people’s color vision. The potential side effect could confound visual system measurements in future studies of clemastine.

Meanwhile, Green, who is both a neurologist and neuroophthalmologist, has been refining VEP techniques on mice in his lab to better detect effects of myelinating agents with changes in the visual system. He reports reproducibility to 1 to 2 percent. Demyelination changes VEP measures up to 20 percent.

In the meantime, Green recommends caution in talking about the results of the clemastine study in people so far. For those early adopters, he suggests that clemastine only be taken for MS in the context of a clinical trial: “We all have a responsibility to advance the field together.”

The researchers report funding from UCSF and the Rachleff family.