Make Way for Another MS Model?

In a head-to-head comparison of four MS models, one based on HSV-1 infection shows its value

It’s caused plenty of embarrassment, but the virus that triggers cold sores could also provide insight into MS, a new study suggests. A mouse model that uses the virus mimics MS as closely as does the leading model, researchers report online ahead of print in Gene Therapy (Dumitrascu et al., 2014).

As far as scientists can determine, there’s no naturally occurring animal equivalent of MS (Wekerle et al., 2012). Instead, researchers have tried to recreate aspects of the disease with models as diverse as marmosets, cultured cells, and zebrafish (see “Animal Arsenal”). The classic model—which is really a group of similar models—is experimental autoimmune encephalomyelitis (EAE), first described in the 1930s. One way to instigate EAE is by injecting rodents with shards of central nervous system proteins such as myelin basic protein (MBP), myelin oligodendrocyte glycoprotein (MOG), or proteolipid protein (PLP). Although the pathology varies, mice and rats with EAE often show MS hallmarks such as myelin loss and an influx of inflammation-promoting cells into the central nervous system (see “Experimental Autoimmune Encephalomyelitis”). “It is widely accepted as the best animal model of MS to study the pathogenesis of the disease,” says Richard Dix, Ph.D., a professor of biology at Georgia State University in Atlanta, who wasn’t connected to the new paper.

But no model exactly emulates MS (Pachner, 2011), and EAE has taken its lumps for leading drug developers astray (Constantinescu et al., 2011). Researchers have knocked the model for another reason. “EAE is very artificial,” Homayon Ghiasi, Ph.D., director of the Viral Immunology and Vaccine Development Center at Cedars-Sinai Medical Center in Los Angeles, California, told MSDF. He noted, for example, that the recipe for producing EAE often includes an immune-stimulating adjuvant, such as heat-killed tuberculosis bacteria, which doesn’t recapitulate MS.

Ghiasi and colleagues developed an alternative model by infecting mice with herpes simplex virus-1 (HSV-1). Most of us are intimately familiar with this virus because it causes cold sores. Several studies suggest that a virus promotes MS (see “Viral Villain”), although viral involvement in the disease remains controversial. By itself, HSV-1 doesn’t cause MS-like symptoms in mice, Ghiasi and colleagues found. So they genetically modified the virus to carry the gene for interleukin-2 (IL-2), causing the mice to overproduce the cytokine. MS patients show increased amounts of IL-2 in their blood and cerebrospinal fluid. Thus the model includes two factors—a viral trigger and elevated IL-2 levels—that EAE doesn’t capture. The researchers first described their model in 2005 (Osorio et al., 2005).

In their latest study, Ghiasi and colleagues gauged how the model stacks up against three different methods for eliciting EAE. The scientists infected mice with the modified virus or induced EAE by injecting fragments of MBP, MOG, or PLP. After 29 days, the researchers dissected the mice and looked for signs of MS pathology. 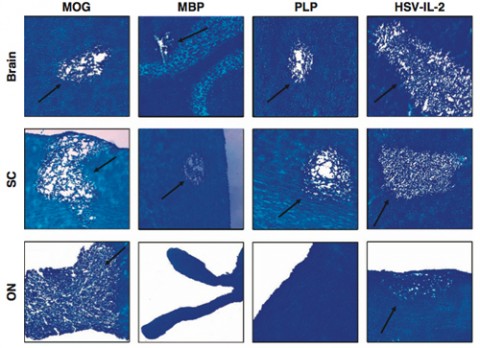 Ghiasi’s team also compared how the models respond to a common treatment for MS, interferon β (IFN-β). In the HSV-1-infected mice, the therapy reduced brain demyelination by 90% and halted myelin loss in the stem cell white matter and the optic nerve. IFN-β benefitted the other models, but not to the same degree.

The viral model fell down in one respect, however. Many MS patients suffer from leg and arm weakness, which can progress to paralysis. More than 60% of the mice in the MOG-injected group showed muscle weakness, but it was the only one of the four models to trigger this symptom or paralysis.

“There’s no perfect animal model for MS—or any disease,” Ghiasi says. “This one is probably the closest” for MS. Nonetheless, he says, “we did not develop this as a competitor for EAE.” Rather, it allows researchers to address questions they can’t answer with EAE.

Dix applauds the study for directly comparing the models. “It needed to be done,” he told MSDF. The work “puts the virus model in perspective with the other three big models.”

“The paper shows that it behaves very similarly to the other EAE models,” Terrence Town, Ph.D., told MSDF. He’s a professor of physiology and biophysics at the Zilkha Neurogenetic Institute of the University of Southern California in Los Angeles and was not involved in the new paper. “This model is as useful as MOG/CFA,” the widely used MOG-containing mixture for inducing EAE.

Dix cautions that not all MS labs are prepared to work with the viral model, which could hinder its use. Although HSV-1 isn’t as dangerous as Ebola virus, it is a biosafety level 2 pathogen and requires the use of measures beyond the usual precautions, such as limited lab access and splash-blocking biological safety cabinets.

Town and Dix agree with Ghiasi that researchers should view the viral model as a complement for EAE, not a replacement. The more MS models researchers have, the better, particularly for preclinical studies of potential drugs, Town said. If a would-be drug proves beneficial in multiple models, that provides a stronger rationale for testing it in patients. “We want to see concordance in the screening of drugs,” he said.

The study was funded by Public Health Service grants EY15557, EY13615, and AI093941 from NIH and Cedars-Sinai Medical Center. The authors have nothing to disclose. Terrence Town and Richard Dix report no conflicts of interest.

Dear Friends, I would like to bring to your kind attention the clinical, quantum-biophysical-semeiotic method, adopted by my Co-Authors and myself in the study of neurodegenerative diseases, including MS, www.sisbq.org, aiming especially to their primary prevention.

In some articles we have highlighted the aspecific sign termed

‘Inherited Real Risk’ of brain disorder, which provides useful information regarding differential diagnosis between brain cancer and other cerebral diseases, both in clinical and pre-clinical stages. Such a ‘Inherited Real Risk’ of brain disorder needs then to be  integrated with other specific q-b-s signs, according to different trigger-points, related to diverse cerebral disorders. For instance, Boezio's sign is really usefull in order to verify if in a given patient the congenital risk  of MS  is real.

In addition to that, taking into account the recursive genetic effects underlying neurodegenerative pathologies, an early QBS diagnosis allows a primary and pre-primary prevention, of such ominous diseases, under Quantum Therapy. For further information read the article at URL http://www.sisbq.org/uploads/5/6/8/7/5687930/boeziosign_2013.pdf

It is an interesting finding and yet viruses have been implicated before; therefore it is hard to decipher if the pathogenesis of MS suddenly will become any clearer. Semliki Forest virus (SFV), mouse hepatitis virus (MHV), and Theiler's murine encephalomyelitis virus (TMEV) are implicated in MS or MS-like syndromes. SFV induces an acute infection with viral clearance followed by secondary demyelination. After peripheral injection into B6 mice, SFV establishes a transient infection in the brain followed by secondary demyelination after the virus has been cleared. Demyelination due to SFV appears to be T cell mediated Recent findings demonstrated that the initial lesion is possibly induced by molecular mimicry between the viral surface glycoprotein E2 and MOG peptide 18–32, with a contribution of antipeptide antibody production, possibly crossing the BBB and these findings are published.

The coronavirus MHV is a common enteric pathogen of laboratory mice. The JHM strain of the virus (JHMV) and its variants, after intracerebral injection, cause an early demyelinating phase,  preferentially located in the ependymal cells with viral replication in astrocytes, microglia, and oligodendroglia, which appear to undergo apoptosis. As the disease progresses, demyelination declines, but new foci of demyelination appear. Though the virus is hardly detected in the CNS, it may establish a latent infection in astroglial and microglial cells.

The demyelination disease induced by TMEV is probably the most relevant virus-induced animal model of MS, and the mechanisms underlying the progression of the disease have been widely studied.

In conclusion, I think it is not the paucity of models for pathogenesis but the limitation of agents to block pathways that halt both inflammation and neurodegeneration early.