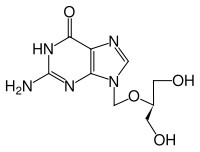 The drug ganciclovir may quell inflammation in the MS brain by a mechanism distinct from the antiviral activity for which it is known, and without compromising immunity in the periphery, according to a study published in the Journal of Experimental Medicine (Ding et al., 2014).

Previous studies from professors of neurology Oluf Andersen, M.D., and Jan Lycke, M.D., Ph.D., of the MS Research Team at the University of Gothenburg in Sweden tested the related drug acyclovir and found no effect other than an association with fewer exacerbations (Lycke et al., 1996; Bech et al., 2002).

In the brain of a person with MS, ganciclovir interacts with microglia, the central nervous system phagocytes that, when activated, proliferate early in pathogenesis and promote neuroinflammation. The microglial reaction attracts T cells into the brain.

In the present study, Tony Wyss-Coray, Ph.D., a professor of neurology at the Stanford University School of Medicine, and colleagues gave ganciclovir daily to wild-type mice both before and after induction of experimental autoimmune encephalomyelitis (EAE), using doses close to those that humans take for viral infections. They also tested the drug in mice with kainic acid-induced seizures.

The effects of ganciclovir were dramatic if given before EAE induction, squelching microglial division and inflammation and blocking the rush of T cells into the brain and spinal cord. The remaining microglia were small and nonactivated. Yet at the same time, the drug failed to interfere with the immune response in the periphery, demonstrated by evoking an antibody response to ovalbumin.

Further tests assessed ganciclovir’s fate in the brain. Analysis with liquid chromatography/tandem mass spectrometry showed persistent virus in the CNS at 21 days but not in plasma. Investigators found a radiolabeled ganciclovir analog in the brain in EAE mice but not in naïve mice. And ganciclovir decreased the number of proliferating microglia in cell culture, even in the absence of thymidine kinase. The drug is specific to microglia and the macrophages from which they descend, with no effect on astrocytes or T cells.

The researchers conclude that although they did not investigate ganciclovir in humans, the drug should be studied further because of its clear effects on microglial proliferation and neuroinflammation in the EAE mouse model.

The authors of the Journal of Experimental Medicine article claim no disclosures. Their funding came from the NIH and the Department of Veterans Affairs. Dr. Tyler has consulted for Biogen Idec, Genentech, Pfizer, Johnson & Johnson, and the PML Consortium.

Microglial activation may play a role in CNS injury in MS, although the human evidence supporting this is not definitive. The authors report a novel potential role of the antiviral drug ganciclovir in inhibiting microglial proliferation and activation. They show that GCV can reduce injury in both an EAE model and a kainic acid-induced model of excitotoxic neurodegeneration and that this effect correlates with reduction in microglial activation and proliferation. The exact mechanism(s) by which activated microglia contribute to neuronal injury likely include production of pro-inflammatory cytokines as well as generation of reactive oxygen species.

Interestingly, GCV inhibited proliferation of microglia in culture, suggesting a direct anti-proliferative effect. GCV works as an antiviral by inhibiting the enzyme DNA polymerase. The active antiviral form of the drug is a triphosphate, and getting to that state requires phosphorylation by both host and viral thymidine kinase enzymes. It is not clear whether the antimicroglial activation requires GCV phosphorylation or works via a completely independent mechanism.

Drugs that specifically inhibit microglial activation do not currently exist, so it will be important to learn more about how GCV works. Perhaps the closest agent in terms of action might be minocycline, which also inhibits microglial activation and has anti-inflammatory and neuroprotective actions. Minocycline also has a therapeutic effect in EAE but was not found to be beneficial to date in neurodegenerative diseases like ALS. It has been tested in small trials but not randomized, placebo-controlled double-blind large studies in relapsing-remitting MS.