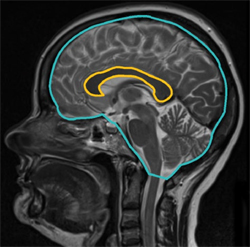 A 17-year longitudinal study published online ahead of print in the Multiple Sclerosis Journal found that corpus callosum area (CCA) was closely associated with cognitive decline in multiple sclerosis patients (Granberg et al., 2014). The results may point to a refreshingly uncomplicated biomarker for cognitive and physical disability in MS patients.

The researchers examined a cohort of 37 MS patients in 1996, with follow-up examinations in 2004 and 2013, to assess changes in their CCA. In order to compare CCA from patient to patient, the researchers normalized each patient’s midsagittal CCA to his or her midsagittal intracranial skull surface area. They called the resulting measurement the normalized corpus callosum area (nCCA).

In the 2004 and 2013 follow-ups, only 23 of the patients remained in the study, and the researchers compared their results with those of 23 age- and sex-matched healthy controls. At each examination the participants were assessed on the Expanded Disability Status Scale (EDSS) and they performed the Symbol Digit Modalities Test (SDMT), a measurement of processing speed.

“I wouldn’t have expected that the simple measurements of the corpus callosum would actually outperform the volumetric measurements,” Tobias Granberg, M.D., who is a current Ph.D. candidate at Karolinska Institutet in Stockholm, Sweden, told MSDF. He said that it takes only about 45 seconds to obtain the measurement from each MRI sequence

Although the nCCA measurements showed a strong correlation with patients’ SDMT and EDSS scores at each time point, the nCCA measurements taken in 1996 were not predictive of each patient's SDMT and EDSS scores 17 years later. Granberg and his colleagues adjusted the patients’ nCCA with their SDMT and EDSS scores at the outset and found no statistically significant relationship between nCCA and SDMT or EDSS in 2013. Granberg told MSDF that he felt the lack of statistical significance was due to the small sample size, and that future studies with larger sample sizes would show greater predictive power of nCCA.

“There are some previous studies that have used these simple measurements and have proven that they can help in deciding which patients will be going from having clinically isolated syndrome into having MS,” Granberg said.

Granberg also said that he and his colleagues are conducting a companion study to this one directly comparing corpus callosum area to the corpus callosum index, another method of measuring atrophy. He’s also testing nCCA as a way to potentially differentiate patients in the relapsing versus the progressive phase of the disease.

This study was funded by the Stockholm County Council and Karolinska Institutet through the regional agreement on medical training and clinical research. Granberg declared no conflicts of interest.

This study shows the robustness of corpus callosum cross-sectional area measurements across long periods of time, even in the face of substantial changes in MRI equipment. It may therefore be possible to mine long-term natural history and imaging data in order to build stronger prognostic models for long-term outcomes based on baseline findings and relatively short-term changes, and the corpus callosum area measurement is a promising candidate to enter models of this type. The study is also important because it reminds us that cognitive impairment is not exclusively caused by cortical damage but depends also on connections across brain regions—something that is probably true, but in reverse, for physical disability.