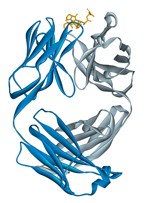 Alemtuzumab is a monoclonal antibody that targets CD52, which is present on T and B cells. The drug was previously approved and marketed for use against chronic lymphocytic leukemia but had been pulled from the market to discourage off-label use for MS.

Just before the end of 2013, the FDA told the Genzyme unit of Sanofi-Aventis, which was looking to market the drug as a novel treatment for RRMS, that prior to approval the company would need to submit additional data that included an active comparator.

The company issued a statement saying it strongly disagrees with the FDA's conclusions and that it plans to appeal the ruling. Alemtuzumab has previously been approved for MS in Canada, Europe, and Australia.

"This is disappointing news, given the need for more therapeutic options for people with MS living in the United States," said Timothy Coetzee, Ph.D., chief advocacy, services and research officer at the National Multiple Sclerosis Society, in a press release.

Genzyme's submission for approval was based primarily on results from two Phase III studies. In the Comparison of Alemtuzumab and Rebif Efficacy in Multiple Sclerosis, Study Two (CARE-MS II) trial, which focused on patients with RRMS, alemtuzumab significantly reduced relapse rates and disability when used as a first-line therapy compared with standard therapy with interferon β-1a.

In the other trial, CARE-MS I, comparing alemtuzumab and interferon β-1a in previously untreated patients, alemtuzumab showed a significant reduction in relapse rates at 2 years. However, no significant effects were seen on sustained accumulation of disability.

Data from the CARE trials figured heavily in the drug’s approval in Canada, Europe, and Australia.

So why did the FDA, reviewing essentially the same data, come to such different conclusions?

"It appears to me that the FDA had decided, based largely on the study design, that the studies were not adequate to provide interpretable data," said Richard Rudick, M.D., in an interview with MSDF. Rudick is the director of the Mellen Center for Multiple Sclerosis Treatment and Research and vice chair for research and development at the Neurological Institute of the Cleveland Clinic Foundation in Ohio.

Rudick said he has two reasons for harboring that opinion. First, he said, the FDA appeared to emphasize results that were less favorable to alemtuzumab, for example, Expanded Disability Status Scale (EDSS) results in CARE-MS I and changes in T2 volume in both studies.

"To me, this seems to be 'cherry-picking' to support the contention that the study results were not adequate to support approval," Rudick said.

Also, he said, the FDA did not appear to give any consideration to data presented by the sponsor regarding FDA concerns about biased reporting. "One of the FDA reviewers summed up their position at the Advisory Panel Hearing by stating that the CARE studies were 'biased by definition.' "

Another prominent MS clinician who is disappointed about the FDA's decision is Aaron Miller, M.D., medical director of the Corinne Goldsmith Dickinson Center for Multiple Sclerosis at the Icahn School of Medicine at Mount Sinai School of Medicine in New York, NY, and a professor of neurology at the same institution.

"I certainly don't share the FDA's opinions on this drug," he told MSDF in an interview.

One problem he has with the FDA's decision is what he sees as the FDA's comparatively rigid requirements for defining clinical relapse. "Patients had to have objective changes on their neurological exam, and these were recorded by a blinded rater. So I don't really think that scoring relapses was going to be influenced by the unblinding of patients."

Miller also pointed out that the FDA also criticized the use of the EDSS as an instrument of clinical assessment: "I think that is inappropriate since every single licensed drug on the market for MS has been approved on the basis of examinations using the EDSS." Although Miller conceded that the EDSS does have flaws as an assessment tool, he said it has been considered the gold standard for use in nearly every clinical trial.

"And perhaps most importantly," he said, "the argument that the results might have been influenced by potential unblinding is further negated by the fact that there was a physically significant benefit seen on the MRIs of patients treated with alemtuzumab." Miller said it's very hard to imagine how unblinding the patient or the treating neurologist would influence the MRI results.

"I think it's extremely regrettable that patients in the U.S. will not have the option of being treated with this drug," Miller said. "It creates an extremely difficult and dangerous situation." The danger, Miller said, lies in the probability that some patients will travel to other countries to get the drug and miss out on the close monitoring required for its use.

The potential for spotty monitoring in such cases may be heightened by the fact that alemtuzumab is infrequently dosed—first for five consecutive days, then, a year later, for three consecutive days. All dosing is delivered via intravenous infusion.

One opinion that appears to be gaining steam and fueling some of the disappointment regarding alemtuzumab's fate is that it may be important to initiate robust therapy for MS as soon as it is diagnosed rather than relying on more traditional step therapy, that is, beginning with less potent drugs first and then moving to more powerful (and potentially toxic) drugs as needed.

"I think that’s a reasonable hypothesis, but it hasn't been tested," Miller said. "There have been no comparative studies between traditional stepped therapy and going with a strong drug from the beginning."

But David Baker, Ph.D., a neuroimmunologist at Barts and the London School of Medicine and Dentistry, told MSDF in an interview that he believes more aggressive therapy is key. "When it comes to managing MS, I believe in hit it hard and hit it early," he told MSDF in an interview. As he puts it, "Time is brain. Once MS is diagnosed, the progression time bomb is ticking."

Dr. Baker, along with his colleague at Barts, Gavin Giovannoni, M.D. (a member of MSDF’s Scientific Advisory Board), writes the popular Multiple Sclerosis Research Blog.

Dr. Rudick stated that he is involved in a research study focusing on MS biomarkers funded by Genzyme. Following institutional policy, funding for the study goes to the Cleveland Clinic. Dr. Miller stated that he was a subinvestigator on the MS CARE II trial and was also a member of the steering committee associated with Sanofi-Aventis's MS drug, teriflunomide. Dr. Baker has disclosed no conflicts of interest.

Comment To The FDA Regarding The Lemtrada Appeal:  http://seekingalpha.com/instablog/957061-chris-demuth-jr/2556001-comment-to-the-fda-regarding-the-lemtrada-appeal