Vitamin D3 selectively and reversibly inhibits the migration of T helper cells into the central nervous system (CNS), according to findings from a new study. The authors said the findings could have significant implications for the use of vitamin D as an adjunctive therapy for immune-mediated diseases such as multiple sclerosis (MS).

The study appeared online December 9 in the Proceedings of the National Academy of Sciences and was authored by Anne R. Gocke, Ph.D., an assistant professor of neurology at the Johns Hopkins University School of Medicine in Baltimore, Maryland, along with colleagues (Grishkan et al., 2013). The authors described their study as "a systematic evaluation of the vitamin D effects on T lymphocytes at each step of their journey to the CNS."

Based mostly on epidemiologic and animal studies, it has been suspected for some time that high-dose vitamin D supplementation might have positive effects on the course of disease in patients with MS. In fact, a clinical study is currently underway at Johns Hopkins looking more closely at that hypothesis.

Focusing on mechanisms of D3 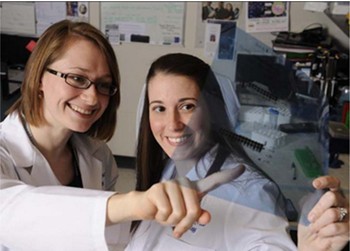 In conjunction with the clinical study, Gocke and her group decided to use an animal model to focus on the mechanism of action of vitamin D3—exactly why supplementation appears to have positive effects.

The investigators administered high-dose vitamin D via oral gavage to a group of mice and at the same time inoculated them with myelin oligodendrocyte glycoprotein (MOG), which is associated with development of EAE. A control group of mice received no vitamin D prior to inoculation with MOG.

How would the vitamin D administered to the mice translate to human subjects with MS? Gocke said an equivalent dose in humans might work out to be approximately 10,000 IU per day, which is the dosage being used in the clinical trial at Johns Hopkins.

In the current study, the investigators first tracked the mice over time to see how their disease progressed. As would be expected based on previous studies, the researchers did not see EAE develop in animals that had received vitamin D, Gocke said.

Then the researchers sacrificed the animals at various times and used several techniques—including ELISA, flow cytometry, complete blood counts, and bioluminescent imaging—to track the T cells and determine how and where they were migrating.

"We found that the T cells were activated in the periphery, but they were not getting into the brain or the spinal cord," Gocke said. The data showed that myelin-reactive T helper cells are successfully generated in the presence of vitamin D3, that they secrete proinflammatory cytokines, and that they do not preferentially differentiate into suppressor T cells. The T cells were able to migrate from lymph nodes and make their way into the peripheral circulation and subsequently to sites of immunization.

However, in mice supplemented with vitamin D, T cells were blocked from entering the parenchyma and instead remained in the peripheral circulation.

"There have been a number of studies showing differentiation of T cells, but our study is the first to show the effects of D3 on migration and trafficking of immune cells," Gocke said.

Gocke pointed out that some of the newly approved drugs for treating MS, such as natalizumab and fingolimod, like vitamin D3, work by impairing immune cell trafficking.

However, one particularly important finding from the present study, Gocke explained, was that, unlike natalizumab and fingolimod, which after cessation can take 6 to 12 weeks to clear the body, vitamin D3 is cleared very rapidly. "That could prove to be a very good attribute in clinical situations where a patient has a serious infection and their immune function needs to be reestablished," she said.

The authors concluded that their findings provide unique evidence that vitamin D3 prevents EAE by modulating the migratory phenotype of the pathogenic T helper cells while having no known effect on their priming or effector functions.

Hayes told MSDF that she thinks the MS research community is closing in on what she believes is the dominant mechanism of multiple sclerosis. "It is environmentally determined, and it relates to vitamin D endocrine system regulation of gene-expression patterns that are relevant to central nervous system and immune system function," she said.
She pointed out that much new knowledge has been accumulating over the past few years regarding the way patients' genomes and biology respond to the vitamin D endocrine system. In addition, much has been learned about gender differences in MS.
She said that armed with that new information, it is likely that clinicians not only will be able to control MS symptoms using vitamin D-based strategies but also may be able to prevent many if not most new cases of the disease.
"There will of course be individuals whose genetic variants impede the protective actions of the vitamin D endocrine system, and those are the people we must study carefully from a genetic perspective to discover how to help them too," she said.

We asked her what she sees as the most important questions yet to be answered regarding the role of vitamin D3 in managing MS.

She responded (in order of priorities):

In addition, Hayes pointed out that an important paper, again relating to the topic of immune cell function, was recently published. That study (Hollis and Wagner, 2013), authored by Bruce W. Hollis, Ph.D., of the Medical University of South Carolina in Charleston, along with a coworker, concluded that significant vitamin D needs to be bioavailable on a daily basis to ensure stable circulating concentrations. The implication, they wrote, is that since vitamin D is characterized by a short circulating half-life, variations in dosing could have crucial effects on the outcomes of clinical trials.

Drs. Gocke, Hayes, and Hollis have declared no conflicts of interest. The study was supported by the National Institutes of Health Grant R01 NS041435, the Kenneth and Claudia Silverman Family Foundation, and an American Medical Association Foundation Seed Grant.