Patients with early signs of multiple sclerosis (MS) given a single injection of a cheap, safe, and common vaccine against tuberculosis (TB) were significantly less likely to develop full-blown MS than controls.

In a 5-year, double-blind clinical trial conducted by a team of researchers in Rome, patients with early signs of MS received a single dose of a vaccine against TB. Vaccinated patients showed fewer diagnostic brain lesions than did patients who received a placebo—both in the first 6 months after vaccination with no other treatment and also 5 years out with standard care. At the end of 5 years, significantly more vaccinated patients were considered symptom-free and were not being treated with disease-modifying therapy (DMT). None of the patients experienced any significant adverse events.

In the study, published December 4, 2013, in Neurology (Ristori et al.), Giovanni Ristori, M.D., Ph.D., at Sapienza University, Rome, and his team administered the TB vaccine to 33 patients and a placebo injection to another 40. For the first 6 months, participants received no other treatment but had monthly exams and MRI brain scans. After 6 months, patients were started on the standard treatment of care, interferon-b1a for 12 months, after which various DMTs were individually introduced and managed by each patient’s doctor. All the patients had follow-ups 12 months, 18 months, and 60 months after their one-time vaccination or placebo injection. They had exams every 6 months during an open-label study extension from 18 months to 60 months.

Denise Faustman, M.D., Ph.D., director of the Immunobiology Laboratory at Massachusetts General Hospital and associate professor of medicine at Harvard Medical School in Boston, who was not involved in the study, greeted the Italian paper with enthusiasm. “This is just fantastic data,” she told MSDF. “The story should be ‘BCG, a 90-year-old vaccine with an impeccable safety record, is showing efficacy that is better than the standard of care.’ ”

The vaccine in question is the Bacillus Calmette–Guérin (BCG) vaccine, a live but weakened version of the bacterium Mycobacterium bovis. M. bovis resembles the human tuberculosis bacterium M. tuberculosis closely enough to trigger immunity to human tuberculosis (TB). BCG is one of the oldest vaccines, its development 90 years ago a direct outgrowth of Robert Koch’s Nobel Prize–winning work on TB.

BCG is cheap, safe, and the most widely used vaccine in the world. More than 4 billion people (including 80% of infants worldwide) have been vaccinated with BCG since 1921. Only a handful of countries do not vaccinate with BCG, including the United States. In the U.S., the cost of a single dose of BCG vaccine is around $3. For comparison, the cost of interferon-b1a (Biogen’s Avonex) is about $60,000 a year at Costco.

The BCG vaccine has been tested and utilized in a surprisingly long list of diseases other than TB, including bladder cancer, melanoma, and autoimmune diseases such as type 1 diabetes, Sjögren syndrome, celiac disease, and MS.

In MS, the immune system’s many kinds of T cells behave abnormally. Treatment with BCG vaccine stimulates the production of tumor necrosis factor (TNF), which in turn triggers cell death in abnormal, disease-causing T cells. Drugs that block TNF prevent the deaths of these abnormal T cells and promote the onset of MS. Likewise, MS patients tend to carry an allele for a TNF receptor that blocks TNF and promotes MS. When researchers screened generic drugs for their ability to boost TNF, the BCG vaccine jumped to the top of the list. In 2012, Faustman and her colleagues showed that, in type 1 diabetes, TNF-boosting by BCG can actually reverse disease and restore insulin secretion (Faustman et al., 2012).

MS often first appears in an isolated episode called clinically isolated syndrome. CIS consists of one or more neurologic symptoms involving, for example, the optic nerve, brainstem, or spinal cord. In just over half of these cases, more neurologic episodes follow and CIS progresses to clinically definite MS (CDMS) within 2 or 3 years. In the rest, the patient does not develop MS. It is not possible to predict which cases of CIS will turn out to be benign and which will progress to CDMS. But CIS provides a benchmark for initiating early treatment.

Five years is an unusually long period of time for a clinical trial. “The conversion to CDMS being one of the end points, you need a long follow-up to achieve an informative number of events,” Ristori told MSDF.

Based on an earlier pilot study, Ristori and his team were able to estimate that they would need a sample of size of about 35 to achieve statistical significance. They ultimately enrolled and followed 73 patients, 33 in the treatment arm and 40 in the control arm. The result was a relatively large phase 2 trial with unusually long-term follow up—5 years—and highly statistically significant results. They assigned treatment randomly, read radiological scans blind, and separate sets of physicians performed treatment and assessment. The primary outcome measure was the number of brain lesions appearing in scheduled MRIs. 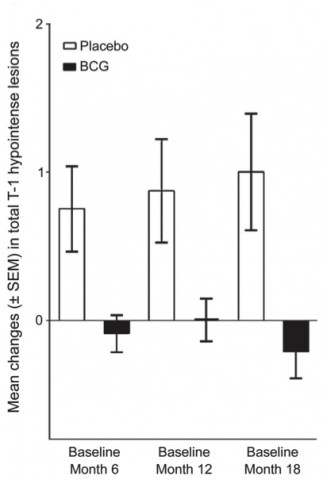 “It’s fabulous when research groups do these double-blinded placebo-controlled trials and actually follow people 5 years out to show that the effect gets better and better with the passage of time. These authors should be heralded. It’s fantastic that they are doing it the right way,” Faustman told MSDF.

Dosing and off-label use

An accompanying editorial by neurologists Dennis Bourdette, M.D., of the Oregon Health & Science University and Multiple Sclerosis Centers of Excellence-West, Veterans Affairs Medical Center in Portland, and Robert T. Naismith, M.D., of the Department of Neurology at Washington University in St. Louis, Missouri, expressed reservations about BCG. “Despite the apparent long-term effects suggested by the present study, it seems unlikely that a single injection of BCG would be highly effective in a disease that lasts decades,” they wrote. “The safety of repeated administration of BCG is unclear, and in the case of repeated bladder injections for cancer treatment, serious side effects can include a systemic BCG immune reaction and localized or systemic BCG infection.”

But Faustman noted that the Ristori work demonstrated the efficacy of a single injection that lasted at least 5 years. A phase 3 clinical study could explore optimal dosing. “You can redose in 10 years if that’s what’s required,” Faustman argued.

Because BCG appears to be so effective, both Ristori et al. and Faustman expressed concern about off-label use. Currently, appropriate doses of BCG are not available in countries such as the United States that do not normally distribute the vaccine. BCG is available in U.S. pharmacies as a treatment for bladder cancer, but in far higher doses than would be appropriate for an MS vaccine.

“What you really don’t want people doing … is buying the bladder preps and mixing them up in their basements,” Faustman said. “What you want to do in the United States and Europe is get these trials going so there is a single vial that is the right dose for dosing for autoimmunity.”

Because many MS patients experience rapid decline, it’s likely that both they and their doctors will want access to the BCG vaccine. But what constitutes appropriate dosing is still up in the air. Just as for any other live vaccine, BCG is inappropriate for immunocompromised individuals.

“When you start seeing efficacy of a cheap vaccine in multiple autoimmune diseases done in different parts of the world, you’ve got pretty good substantiation that you’ve got something that’s going to work,” Faustman said.

Ristori and his team are already planning phase 3 trials. It could take years for BCG vaccine to become a standard treatment against MS, Ristori told MSDF, but he imagines BCG being used in the early stages of MS and even in people who are only at risk of developing MS, such as relatives of MS patients or people in which an incidental MRI reveals symptomless lesions.

Editorial writers Dennis Bourdette, M.D., FAAN, FANA, and Robert Naismith, M.D., also disclosed financial interests in companies that market treatments for MS. Bourdette serves on a scientific advisory board for the nonprofit entity NYSTEM; has received speaker honoraria from Biogen Idec, Teva Neurosciences, and Genzyme; holds a use patent for the treatment of MS with cyclic peptide derivatives of cyclosporine, for which he receives royalty payments from DebioPharma; served as a consultant to Teva Neurosciences and Biogen Idec in the past 12 months; has received support for patient and physician education programs from Teva Neuroscience, Biogen Idec, EMD Serono, Acorda, and Novartis; and has received research support from the Department of Veterans Affairs. Naismith has received speaker, travel, or consulting honoraria from Acorda Therapeutics, Bayer Healthcare, Biogen Idec, Genzyme Corp., National MS Society, Consortium MS Centers, EMD Serono, and Questcor Therapeutics; serves on speakers’ bureaus for Acorda Therapeutics, Bayer Healthcare, Biogen Idec, and Genzyme Corp.; and receives research support from Acorda Therapeutics, the NIH, and the National MS Society.

Denise Faustman, M.D., declared no competing interests for the 2012 paper on BCG vaccine and type 1 diabetes.

This is a fascinating study and the authors need to be commended. In MS, axonal loss is the single most important pathological lesion that appears even at the CIS stage and hence, getting a leg up on early treatment is the only hope of prevention of progression. Treatment given at the opposite end of the spectrum, when SPMS has set in, rarely if ever, produces anything tangible, (the MAESTRO-01 study, for example).

The mechanism of BCG action is intriguing, however . If treatment with BCG vaccine stimulates the production of tumor necrosis factor (TNF), which in turn triggers cell death in abnormal, disease-causing T cells, why does TNF worsen MS ? As well, Lenercept, a recombinant TNF receptor p55 immunoglobulin fusion protein worsened MS and that study was abandoned by the UBC MS/MRI analysis group in 1999. Therefore, the mechanism of how BCG works may not be that simple or straightforward but its effects as noted in this study are significant and noteworthy.