High Noon at the Th17 Corral

Time is already the most commonly used noun in the English language, but the word is gaining new molecular definitions in autoimmune research. The fate of one of the key inflammatory immune cell types implicated in the brain attacks that result in multiple sclerosis (MS) is tied to the daily rhythms of the circadian clock, at least in mice.

In the study, naive T cells corralled into culture dishes were more than twice as likely to differentiate into pro-inflammatory Th17 cells if they were collected during the day, when mice normally sleep, than at night—except when the T cells had malfunctioning molecular clocks, researchers reported November 8 in Science (Yu et al., 2013).

In another experiment, mice with chronically perturbed day-night cycles akin to jet lag had almost twice as many of the inflammatory immune cells in their intestines and greater susceptibility to a chemically induced inflammatory bowel disease (IBD), compared to mice living in normal light cycles.

The daily clock may set up a crucial checkpoint to limit the number of inflammatory Th17 cells by synchronizing the development of all T cells, the authors suggest. 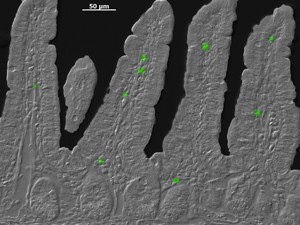 In addition to defending the body against fungi and bacteria, Th17 cells also belong to an important inflammatory pathway in MS and other autoimmune diseases, such as rheumatoid arthritis and psoriasis. "The implication is that alterations in the circadian clock may trigger Th17-mediated autoimmune disease," said Dan Littman, M.D., Ph.D., an immunologist and Howard Hughes Medical Institute investigator at New York University in New York City, who was not involved in the study. "If this turns out to be applicable to human dysregulation of the biological clock, then it could be an important insight."

The findings support an emerging concept in immunology that disturbances in the timekeeping apparatus in immune cells may contribute to exaggerated or pathological responses, independent of an invading pathogen, said Ajay Chawla, M.D., Ph.D., a physiologist at the University of California, San Francisco, who was not involved in the new study. Earlier this fall, Chawla and his colleagues reported that the circadian clock of inflammatory monocytes made the difference between life and death in mice infected with listeria (Nguyen et al., 2013). With a genetically disabled clock, the innate immune system overreacted, causing sepsis. "They cleared the infection but could not shut off," Chawla told MSDF. In contrast, all the mice with an intact clock survived.

What is wrong with our mice?

The latest study began with a shipment of mice intended to explore the connection between gut microbes and a gene that makes the transcription factor NFIL3, which is known to regulate various immune responses. But there was a problem. Months after they were imported into special pathogen-free facilities, a few of the new mice missing the gene became inflamed with IBD symptoms, said Lora Hooper, Ph.D., an immunologist at the University of Texas Southwestern Medical Center in Dallas and senior author of the study.

On closer examination, the sick new mice had higher intestinal levels of CD4+ T cells pumping out the inflammatory cytokine IL-17 than wild-type mice had. Commensal microbes, which are known to be crucial for producing Th17 cells in mice, did not explain why some of the mice were sick. The team transferred the gut germs from both groups of mice into germ-free mice and found no difference in Th17 cells between the two groups. Instead, the excess Th17 and autoimmune-like inflammation seemed to result from the new mice's missing NFIL3 gene.

Looking deeper into the literature for answers, graduate student and first author Xiaofei Yu, Ph.D., became intrigued by the links between NFIL3 and circadian clocks in other cells. Maybe the circadian clock regulated Th17 cells too. "It kind of came out of nowhere," Hooper told MSDF. Over the next 4 years, Yu "unraveled a beautiful molecular mechanism," she said.

In cells, the circadian clock is composed of overlapping groups of transcription factor genes that work together, oscillating between a cascade of on switches and then a sequence of off switches. "The big question in the field of circadian biology is trying to understand what the clock is regulating in each of the cells out there," Chawla said. In the better studied area of metabolism, for example, liver cells oscillate between storing glucose from food during the day and maintaining normal glucose levels at night during sleep in people.

The team conducted a straightforward series of experiments identifying key molecular components linking Th17 development to the circadian clock and circling back to the implications for IBD, Hooper said. First, NFIL3 suppressed Th17 cell development in culture dishes and in mice, but not Th1 or other T cell lineages. As a transcription factor, NFIL3 works on promoter regions of genes, so the team checked out the obvious suspect: the promoter region of the transcription factor crucial for transforming naïve T cells into Th17 cells, known as orphan nuclear receptor RORγt. NFIL3 binds to a short sequence, repressing RORγt and, by extension, Th17 cells. In further experiments, Th17 numbers decreased when either one of two other key components of the circadian clockwork were disabled, BMAL1/CLOCK and REV-ERBα.

"NFIL3 turns out to be the hero of our circadian rhythm story, but it's not the most interesting part," Hooper said. "As a consequence of that, we can show that Th17 cells develop at a specific time of day. Basically, more will develop at noon than at midnight."

In the last set of experiments, the researchers tested the effect of throwing a wrench in the molecular clockworks. The team found no difference in the number of Th17 cells in a 24-hour cycle, consistent with the weeklong differentiation process of Th17 cells, they reported. Then they tried a 2-week jet lag experiment using light boxes to advance the light phase by 6 hours every 4 days. That's roughly equivalent to a sales trip around the world, starting in Boston, stopping off in Copenhagen, then Beijing or Adelaide, and finally Honolulu before arriving back at home.

The daily clock may give Th17 cells license to kill at certain times, such as protecting the body from food-borne infections, and then sweep them away before they can wreak havoc, speculated the authors and others to MSDF. But the checkpoint did not function as well in mice with prolonged jet lag.

"It is too early to know how this will impact research in the field of inflammation or autoimmunity," Littman wrote in an email to MSDF. "Th17 cells are very important in inflammatory diseases, particularly autoimmune diseases. There is a lot of interest in understanding how these cells are regulated. We know that they require commensal microbiota for their appearance, through mechanisms that are not yet understood. This adds another potentially interesting wrinkle to how Th17 cells may be regulated." Littman and his colleagues discovered first that RORγt drives naïve T cells in mice to become Th17 cells. In two recent network analyses, Littman and others identified many more factors in the Th17 regulatory network (Ciofani et al., 2012; Yosef et al., 2013)—including NFIL3, which Hooper and her co-authors show to be important in restraining Th17 cell differentiation by inhibiting RORγt expression.

The effects of the circadian cycle on immune cells are subtle and can only now be measured because of better quantitative techniques, said Chawla, who anticipates that the nuanced signals of the molecular clock may end up defining new cell-to-cell communication roles in the body.

"Cells have to talk to each other," he said. In the body's communication infrastructure, "hormones are the roads, forming the main grid. Nerves are the Ethernet [and utility wires]," Chawla added. "The immune system is the Wi-Fi that provides a signal that can go anywhere in the body."

The findings add another potentially important example of the biological clocks that govern so many physiological processes, Lawrence Steinman, a neurologist at Stanford University in California, told MSDF. In clinical studies of women with MS, for example, blood draws have to be coordinated so they are at the same phase of the menstrual cycle, researchers have learned. "These are interesting effects," he said. "It will be worth watching."

Co-author J. S. Takahashi is a cofounder, scientific advisory board member, and paid consultant of Reset Therapeutics Inc., a biotech company working on circadian rhythms and metabolism. This work was supported by the U.S. National Institutes of Health, the Howard Hughes Medical Institute, and a Burroughs Wellcome Foundation New Investigators in the Pathogenesis of Infectious Diseases Award.