In a story both familiar and new, researchers have nominated a fresh candidate to the slate of proposed microbial triggers of multiple sclerosis (MS): Clostridium perfringens type B. The bacteria species and its toxins are better known as the bane of veterinarians worldwide for causing acute fatal illnesses with neurological symptoms in livestock, usually sheep.

Researchers isolated the toxin-emitting bacillus from a stool sample of one young woman, 21, newly diagnosed with relapsing-remitting MS. In another set of tests, a cross-sectional analysis of blood and cerebrospinal fluid samples showed signs of antibody reactivity to the most potent toxin, epsilon, in 10% of 118 people with MS, compared to 1% of 100 controls. 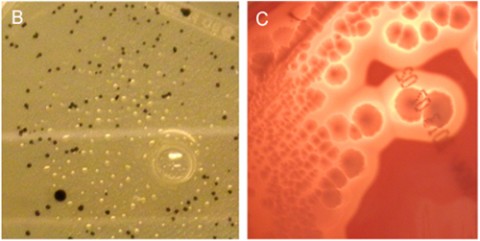 In mice, the team verified epsilon toxin's affinity for white matter and for retinal vessels, a stand-in for the blood-brain barrier and also commonly disrupted in MS. The toxin did not bind to blood vessels in other organs.

The paper, published October 16 in PLOS ONE (Rumah et al., 2013), may be the first report of a human carrying the organism. "Humans are not a natural host" of C. perfringens type B, Tim Vartanian, M.D., Ph.D., a neurologist at Weill Cornell Medical College in New York City and co-author of the paper, told MSDF.

In a scenario linking the organism to MS, Vartanian said, people are rarely infected, but the bacteria hunker down for the long haul. The bacteria may have episodic bursts of activity in the gut, only then releasing the potent epsilon toxin, which may drill through the inner intestinal layer, enter the blood, and target the endothelial lining of vessels forming the blood-brain barrier. In some people, the toxin may slip into the brain, bind to an unidentified receptor on oligodendrocytes, and kill the myelin-forming cells, leading to an autoimmune reaction that forms the sporadic new lesions of RRMS.

Mix of attention and skepticism

That's the hypothesis put forward by Kareem Rashid Rumah, graduate student and lead author, and his co-authors. "The challenges to prove this are formidable," Vartanian said. "We need to identify the presence of the organism or toxin, which we expect to see in people in the midst of an active relapse. Detection is difficult on many levels."

The study has garnered a mix of attention and skepticism among other MS researchers consulted by MSDF. "It's an interesting new hypothesis worthy of study," said Howard Weiner, M.D., a neurologist at Brigham and Women's Hospital and Harvard Medical School in Boston, who was not involved in the study. "If you look at the history, there have been many infectious agents implicated, but none have panned out."

The cause of MS remains enigmatic, but it is believed to be a complex combination of genetic traits and environmental exposures, perhaps at vulnerable ages. Many people assume that the environmental factor is microbial (Compston et al., 2006), while others favor other risk factors, such as climate, diet, sunlight, and more (see "Whodunit?"). Yet, proof has been elusive for all.

"Rarely in the history of research in multiple sclerosis is there not a hot current microbial favorite for the cause of the disease based either on population serology, identification of particles in one tissue or another, recovery of defined organisms from body fluids, or unbridled speculation from the armchair," wrote Alastair Compston and his colleagues in McAlpine's Multiple Sclerosis (4th edition). "None has stood the test of time. As each new microbial hare is set running, chased and caught, we seem no closer to incriminating a particular agent."

The research team ventured into this irresistible, if unrewarding, branch of research in search of a biologically plausible trigger of newly forming lesions. They took one cue from published pathology studies of postmortem human samples collected within hours or days after onset of symptoms (Prineas and Parratt, 2012). New lesions show a breakdown of the blood-brain barrier, dead myelin-forming cells, and an absence of infiltrating T cells and B cells. "That argues against autoimmunity as an initial event and favors a toxin," Vartanian said.

In other criteria, Rumah, Vartanian, and their co-authors looked to the ideas of neurologist John Kurtzke, who proposed that the occupying British troops introduced MS to the Faroe Islands in World War II by an unidentified agent, spread by fecal-oral transmission that also causes acute gastroenteritis and paradysentery, and leads, years later, to clinical MS in only a small proportion of infected people (Kurtzke, 2013).

Epsilon toxin seemed to fit the bill. Vartanian's team is not the first to consider the toxin, but they may be the first to find it in a person. Nearly 30 years ago, an Australian team proposed an association between MS rates and sheep populations, which they attributed to food-borne pathogens from a presumed higher lamb consumption (Murrell et al., 1986). In a pilot study in Southern Australia, they came up empty-handed for epsilon but found antibodies to a neurotoxin-making sheep parasite in one-third of both people with MS and controls.

Rumah, an M.D.-Ph.D. candidate in the labs of Vartanian and microbiologist Vincent Fischetti, Ph.D., at The Rockefeller University, took on the project for his Ph.D. thesis. He began by screening a small number of blood samples for immunological reactivity to epsilon. After he found one positive result, he expanded the screen, using an overlapping combination of blood and samples of cerebrospinal fluid. About 10% of people with MS (mostly with RRMS and low disability scores) showed reactivity to only the epsilon protein and not the four control toxins, including anthrax, compared to 1% of the controls.

The actual exposures to epsilon could be higher, because the antibody reaction is fleeting, the authors wrote. In livestock, the short-term immune response means that the universally advocated vaccines must be administered repeatedly, Glenn Songer, Ph.D., a veterinary microbiologist at Iowa State University in Ames, told MSDF. He was not involved in the study. The same short-lived immunity is true for a human vaccine to another member of the Clostridium family, tetanus.

To track down the source of the toxin, Rumah analyzed stool samples of 30 people with MS and 31 healthy controls, looking for the source of the epsilon toxin. He found the common C. perfringens type A in 52% of the healthy controls, consistent with other studies, but in only 23% of people with MS, suggesting an altered microbiome, the authors wrote.

Interestingly, while type B is a global problem, it's rarely reported in animals in North America, where type D is more pervasive, said Songer, who developed the widely used genotyping test protocols for the bacteria. Both produce epsilon, among other toxins. Songer advocates more frequent and careful genotyping of Clostridia isolated from people and animals to document cases in which traditional animal strains (types B, C, D, and E) jump from animals and animal products into humans (Songer, 2010).

In its Food Safety web pages, the U.S. Centers for Disease Control and Prevention (CDC) names C. perfringens as one of the most common causes of food-borne illness in the country, presumably referring to type A, which makes only the alpha toxin. Another section of the CDC website lists epsilon toxin as a category B bioterrorism agent. Others in that category include food-safety threats, such as Salmonella species, Escherichia coli O157:H7; ricin toxin; and water safety threats, such as Vibrio cholerae.

"Clostridia can make toxins almost like a hobby," Songer said. "C. perfringens is quite remarkable for producing large numbers of toxins." Types B, C, and D are the ones most hazardous to health—mostly for lambs and neonates of other species—but strains of type A can sicken baby pigs, foals, and calves, he said. Type E strains cause about 10% of cases of hemorrhagic enteritis and sudden death in calves.

Fortunately, it usually takes special circumstances for C. perfringens to turn on their disease-causing toxins in animals, Songer said, such as a change in their intestinal nutrients. Among the C. perfringens toxins, epsilon is the undisputed villain. It's like facing a line of enemies, each armed with a different weapon: a knife, fist, gun, and club. "You do want to avoid getting stabbed or clobbered, but first you want to avoid getting shot," Songer said. "You may never see the effects of other toxins just because the effects of epsilon are such a bugger."

In Vartanian's lab, co-author Jennifer Linden, Ph.D., a postdoctoral fellow, purified the type B bacteria from the patient's stool sample and conducted additional tests to rule out laboratory contamination. She and neuroscientist Yinghua Ma have gone on to show in mice that the toxin binds to blood vessels in the brain and not other organs, according to an abstract they presented at the recent ECTRIMS meeting in Copenhagen. They also confirmed other studies showing that the toxin specifically kills oligodendrocytes.

"That provides mechanical plausibility for the hypothesis," Vartanian said, but "it's not proof, which we and others are obligated to show." His team is searching for both the organism and toxin in blood and stool samples and investigating sources of infection in people.

This work was supported in part by The Laurence Tisch Family Research Fund, The Dr. Mortimer D. Sackler Family Fund for Neuroregenerative Research, The Widgeon Point Charitable Foundation, and the Rockefeller University Funds to the Laboratory of Bacterial Pathogenesis and Immunology. The authors have declared that no competing interests exist. Vartanian was a co-founder of the Accelerated Cure Project, the nonprofit publisher of MDSF.

My area of interest is  Bt toxin bacillus thuringiensis pesticide.

In 1995 our lab projected a cross over to wild plants and other species than the targeted insect.

My concern is that human enzymes also open the Bt crystal that is excreted by the plant to the pollen as well as the fruit thereof.

Have any studies been made of a  Bt link to MS.  and or Prions?