Following investigational new drug approval by the U.S. Food and Drug Administration on August 24, a phase 1 clinical trial of mesenchymal stem cell-derived neural progenitors (MSC-NPs) for multiple sclerosis (MS) will soon begin. Rather than quelling the immune response as most MS treatments do, this cell-based therapy may help to repair the damage that the disease wreaks. 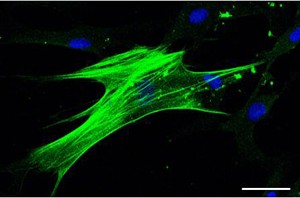 Most therapeutic approaches in MS address inflammation or demyelination. But MS is also degenerative, with a loss of axons and oligodendrocytes leaving debris. This destruction may present a novel target for intervention. Researchers at the Tisch MS Research Center of New York are sending stem cells into the spinal cord to repair some of that damage. The MSC-NPs secrete bioactive factors that might also contribute to myelin formation.

“The goal is to directly promote central nervous system repair by intrathecal delivery of MSC-NPs,” explained senior research scientist Saud A. Sadiq, M.D., in an interview with MSDF. “Based on our preclinical data, MSC-NPs have migratory capability and seem to exert influence on endogenous repair mechanisms through bystander effects.”

Along with research scientist Violaine K. Harris, Ph.D., and colleagues, Sadiq will be conducting an open-label safety and tolerability trial of the cell-based repair.

MSCs derived from connective tissues have been known for some time. First described in 1924, today they’re being tested in nearly 350 clinical trials to treat everything from ulcerative colitis to failed tissue grafts to spinal cord injury. Most of the work has focused on hematological, cardiac, and inflammatory conditions.

Also known as bone marrow stromal cells because they constitute a small population of marrow cells, MSCs are both extremely well studied and still a bit mysterious. Their daughter cells follow connective tissue lineages leading to bone, fat, and cartilage, but not blood. About 10% to 20% of MSC cells give rise to neural progenitor-like cells. Their name is amended with “like” because neural progenitors are associated with the brain. In fact, one researcher calls the cells’ location hugging the brain’s ventricles “brain marrow.”

Stem cells, by definition, divide to self-renew and also yield a daughter cell that can specialize. In contrast, a progenitor cell doesn’t self-renew but can give rise to a restricted number of cell types. Neural progenitors that arise from division of neural stem cells in the brain yield neurons and glia. MSC-NPs do not seem to be quite this plastic; they reproduce themselves but don’t go the full developmental journey to yield mature neurons and glia.

MSCs have an impressive track record in the lab. Christopher Siatskas, Ph.D., of the Monash University Immunology and Stem Cell Laboratories in Australia is very familiar with the cells, although in an interview with MSDF he said he was not familiar with the work of Dr. Sadiq's laboratory. “The rationale to use this approach is based on several established findings,” Siatskas said. “Autologous MSCs, either from fat or bone marrow, can be easily isolated using minimally invasive procedures. Their maintenance in culture is relatively simple.”

Like brain-derived NSCs, MSC-NPs form soccer-ball-like neurospheres in culture, express neural lineage genes, and in culture demonstrate the electrical activity characteristic of neural cells. The MSC-NPs apparently retain their identities and don’t veer onto mesodermal pathways toward fat, cartilage, or bone. That means they’re unlikely to yield misplaced tissue types where they’re delivered to dampen the damage of MS.

A 2010 consensus statement from researchers at Monash University recommended the use of intravenous MSCs to treat inflammatory MS (Siatskas et al., 2010). MSCs are also being unleashed against other forms of MS. For example, researchers at the Karolinska Institute are currently recruiting 15 treatment-refractory patients for a phase 1/2 safety and efficacy trial of IV autologous MSCs in a blinded crossover design. They’re seeking patients with relapsing-remitting MS, secondary progressive MS, or primary progressive MS.

The Tisch researchers demonstrated proof of principle in an animal model and in human cell culture.

In experimental autoimmune encephalomyelitis mice, multiple intrathecal injections of MSC-NPs reduced immune cell infiltration and demyelination and increased the number of nestin-positive progenitor cells (Harris et al., 2012 [1]). Nestin is an intermediate filament protein abundant in neurons but not unique to them.

The cell culture experiments assessed whether MSC-NP cells from people with MS function as well as those from healthy controls (Harris et al., 2012 [2]). The researchers collected and expanded MSCs from 10 people with progressive MS and from two control donors. They cultured cells for 21 days in a serum-free maintenance medium containing appropriate growth factors.

The protocol for the upcoming clinical trial calls for one bone marrow harvesting and expansion followed by three injections of cell suspensions, into the spine only, at 3-month intervals. “First MSCs are isolated from bone marrow based on plastic adherence, followed by expansion in culture. The second stage involves isolation of MSC-NPs from expanded MSCs by culturing in neural progenitor medium containing epidermal growth factor and fibroblast growth factor,” Dr. Sadiq explained.

The investigators will also test the cells for chromosomal stability to rule out the chance they may become cancerous. They’ll use neurological exams, MRIs, and blood analysis to monitor adverse events. Although it’s a safety trial, the researchers will monitor secondary efficacy outcomes with neurological exams, rating scales, MRIs, and quality-of-life questionnaires and follow patients for up to 2 years after the last stem cell infusion.

The clinical trial of the MSC-NP cells may pave the way for use of other types of stem cells to treat or slow the progression of MS. “The worldwide clinical experience with autologous MSC-based therapies suggests a very good safety profile, even when given intrathecally,” Sadiq said. “These initial exploratory trials, with rigorous design and full regulatory oversight, will be critical for informing future trials with stem cells from other sources, such as iPS [induced pluripotent stem] cells, which are not ready for prime time, but they’re getting closer. A number of exciting neural stem cell products are under investigation commercially, although any allogeneic source of cells would carry some risk of rejection.”

Despite the exciting lead-up to the clinical trial, questions remain. MSC-NP cells are technically “NP-like,” perhaps not identical to their brain counterparts. They don’t yield neurons or glia, and exactly how they heal isn’t known.

"Prior studies have shown that bone marrow MSCs do not generate nervous system cells, so it is unlikely that these cells will replenish lost neural cells in MS,” Sally Temple, Ph.D., co-founder and scientific director of the Neural Stem Cell Institute in Rensselaer, New York, told MSDF. “However, the bone marrow cells might release valuable cytokines which could help MS patients. How long-lasting this effect might be, and whether this potential benefit outweighs the risks associated with intrathecal cell injections or the possibility that these bone marrow cells produce adverse cytokines, will be important to determine."

There is zero evidence that these MSC-derived neural progenitor cells can regenerate axons, which is the signature pathological lesion in MS. Glial scarring, production of inhibitory molecules as chondroitin sulphate proteoglycans, ephrins and semaphorins, for instance, ensures that axonal regeneration is inhibited. Wallerian degeneration contributes to axonal loss and to assume that the injected cells will build an axonal network and then myelinate themselves is Herculean and a mirage.