Abnormal Venous Outflow Dynamics May Not Be Implicated in MS

Altered venous outflow dynamics are not common or pathophysiologically significant in patients with multiple sclerosis (MS), according to an imaging study published online in advance of print in the Multiple Sclerosis Journal (Brod et al., 2013). 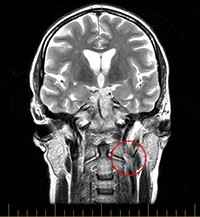 “Chronic cerebrospinal venous insufficiency (CCSVI) was postulated as causally related to MS and disproportionately distributed among clinical MS disease phenotypes,” wrote Staley Brod, M.D., of the University of Texas Health Science Center in Houston, Texas, and colleagues. “Purportedly established by the presence of two or more disordered venous outflow parameters as measured by intra- and extracranial duplex ultrasound, CCSVI was originally reported as exclusively associated with the diagnosis of MS and was not found in other diseases or normal controls.”

Since 2010, results have been conflicting regarding the prevalence of CCSVI in MS and the occurrence of CCSVI in people without MS, due in part to use of varying imaging methods.

High-resolution B-mode NS included color and spectral Doppler of extracranial and intracranial venous drainage. Participants underwent MRV in a 3T scanner before and after injection of gadofosveset trisodium contrast.

As determined earlier (Barreto et al., 2012), prevalence of CCSVI on NS was much lower than previously reported. Groups with or without MS had similar proportions of NS findings consistent with CCSVI (3.88% vs. 7.14%; p = 0.266).

Of 99 patients with MS who underwent systemic and intracranial MRV, 98 were evaluable, and 26 had discrepant MRV and NS findings. Four had abnormal NS but normal MRV.

“The three imaging approaches provided generally consistent data with discrepancies referable to inherent technique properties,” the investigators wrote. “Our findings lend no support for altered venous outflow dynamics as common among MS patients, nor do they likely contribute to the disease process.”

“In our hands, both CE-MRV and TLV had advantages for accessing certain regions of the venous system that are poorly or not insonated by ultrasound such as poor temporal bone windows and the azygous system,” the investigators concluded. “Both CE-MRV and NS provided inherently different and complementary types of information, with generally congruent results. Dynamic CE-MRV may be preferable to TLV in screening for venous abnormalities because it evaluates the most proximal extent of the IJVs [internal jugular veins] and is less invasive.”

Contributed by an anonymous patient under Creative Commons License.