For most people, the first symptoms of multiple sclerosis (MS) begin in adulthood, possibly after the disease has been simmering silently for years. But for some, MS begins in childhood. Two recent studies of pediatric relapsing-remitting MS have found more evidence that the two main disease processes—inflammation and neurodegeneration—may both begin at the earliest stages and interfere with overall brain growth and health.

Researchers think the onset of MS in children may be a window into the disease origins for everyone. Pediatric MS is rare, accounting for only 2% to 10% of all MS cases. Children share some MS risk factors with adults, such as immune-related genes, low vitamin D levels, and certain viral exposures, as well as similar antibody and T cell profiles (Waldman et al., 2014).

The new findings come from the Canadian Pediatric Demyelinating Disease Network, a prospective study that has grown to include 24 centers in Canada, and also the Children’s Hospital of Philadelphia, Pennsylvania, USA, where the lead investigator, Brenda Banwell, M.D., is now based. The study enrolls people under age 18 who suffer an acute demyelinating event. The one-time demyelinating attacks affect roughly 1 in 100,000 children. The events can be severe or fatal, but most children recover. Some will have recurrent or chronic attacks and be diagnosed with MS (Banwell et al., 2011).

Although the two studies drew from the same population of children, they were conducted by different research teams and used different techniques to answer different questions. One group profiled blood samples with antigen microarray technology and found a pattern of growing antibody reactivity, also called epitope spreading, that distinguished MS from a one-time demyelinating illness within months of the first attack (Quintana et al., 2014).

If confirmed, the findings could pave the way for a predictive clinical test for childhood-acquired demyelinating syndromes, according to an accompanying editorial by Bernhard Hemmer, M.D., of Technical University, Munich, Germany, and Peter Calabresi, M.D., of Johns Hopkins University in Baltimore, Maryland, USA (Hemmer and Calabresi, 2014).

In the other study, researchers used MRIs and mathematical models to compare brain growth over time in teens and younger children with MS, compared to others of the same age without demyelinating disease (Aubert-Broche et al., 2014). They found both impaired growth of the brain and atrophy, as signaled by abnormally small brain volume. The thalamus was also strikingly smaller in kids with MS. Taken together, it shows “a clear failure of the anticipated resiliency” to MS damage in the maturing brain.

“This is the first study to compare the trajectory of brain growth in pediatric MS compared to normative controls,” wrote Tanuja Chitnis, M.D., and Mark Gorman, M.D., in an accompanying editorial (Chitnis and Gorman, 2014). It reinforces the notion that brain atrophy and thalamic volume are important pediatric clinical trial outcomes, Chitnis told MSDF. 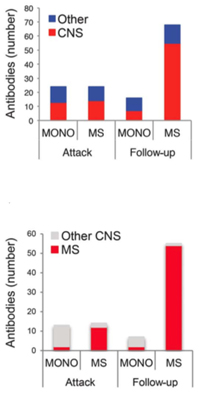 “One of the mysteries of MS is: What is the target when immune cells start attacking the central nervous system (CNS)?” said Amit Bar-Or, M.D., a neurologist at McGill University in Montreal, Quebec, a co-author of the microarray paper, and a principal investigator in the Canadian pediatric study.

“We had the opportunity to track prospectively from the initial episode what might or might not turn out to be MS,” he told MSDF. One of the strengths of the study comes from the children who do not develop MS. “You will make antibodies in your serum [to pieces of CNS proteins] when you bang your head,” Bar-Or said. “The immune system responds to injury. It may be consequence or cause.”

To explore the early immune response and learn what distinguishes MS, the team deployed microarray technology developed as a graduate school project by first author Francisco Quintana, Ph.D., at the Weizmann Institute of Science in Rehovot, Israel. Quintana is now at Brigham & Women’s Hospital and Harvard Medical School (HMS).

Quintana, Bar-Or, and their co-authors divided blood samples into two groups, totaling 40 children with a single demyelinating event and 36 who later developed MS. They tested blood samples in microarrays loaded with a panel of protein pieces, mostly from the brain and spinal cord. In the first group, they compared the antigen reactivity of blood samples taken at the first visit and then at 3 and 12 months later to learn the reactivity differences between chronic MS and a single event. Then they retested the pattern differences in the second group of samples.

The antibody profiling showed a dramatic difference between the two groups at 3 months, the researchers reported. Compared to those with an isolated episode, samples from children subsequently confirmed with chronic MS showed rapidly expanding combinations of antibodies.

The fact that a distinctive autoimmune arsenal in blood expands at the earliest stages of disease represents some of the first detailed evidence of epitope spread in people, the researchers told MSDF.

“It is a very solid finding,” Stephen D. Miller, Ph.D., of Northwestern University School of Medicine wrote in an email to MSDF. Miller and his colleagues developed therapeutic strategies for epitope spreading in mice that have shown encouraging results in safety tests in people.

“What we don’t know, and is hard to prove, is if the epitope spreading is a cause or consequence of the pathological process,” Quintana said. The team is following up to learn if and how the magnitude of epitope spread relates to patient outcomes. “For example, if one patient’s antibodies recognize 10 antigens and one patient’s antibodies recognize two, does the one that recognizes more antigens do worse?”

“In the human body, it is astonishing how rapidly autoantibodies develop and fade away,” Hemmer and Calabresi wrote in the commentary. They speculated that it may take 3 months of repeated antigen exposure for B cells to ramp up production of the damaging antibodies.

The apparent epitope spread makes the technology both more promising and more complex to develop as a diagnostic or prognostic tool, Bar-Or told MSDF. “From a biological standpoint, it emphasizes the challenge we face,” he said, speculating on future directions. “One of the goals therapeutically is to develop antigen-specific treatment. With epitope spread, that treatment may not work in everyone. On the other hand, maybe we can use this technique to our advantage and design specific [individualized] antigen therapy.” But first, he said, these findings need to be replicated in a prospective study.

The Israeli-based company ImmunArray has licensed the technology and is developing it for application in autoimmune diseases, such as systemic lupus erythematosus, MS, and more.

The second study focused on brain growth in 36 Canadian children with MS, ages 5 to 17, who were followed for up to 7 years. All were regularly imaged on the same MRI machine in Toronto beginning with the first attack on the myelin in their brain, optic nerve, or spinal cord, and were compared to 25 healthy controls.

For additional comparison, researchers developed models to estimate brain growth from scans of 339 U.S. children from the National Institutes of Health (NIH) MRI Study of Normal Brain Development. In fact, the Canadian pediatric study was designed in partnership with the NIH pediatric study, using the same protocol, Banwell told MSDF. The Toronto site also conducts the brain volume analysis for the NIH study.

Children and adolescents with MS had abnormally low brain volume due to a combination of atrophy and a failure of age-expected growth. Among the analyzed brain regions, researchers found a striking loss of volume in the thalamus, which is also an early and prominent site of gray matter pathology in adults.

“This is the first study to compare the trajectory of brain growth in pediatric MS compared to normative controls,” wrote Tanuja Chitnis, M.D., of Massachusetts General Hospital for Children and HMS in Boston, Massachusetts, USA, and Mark Gorman, M.D., of Boston Children’s Hospital and HMS.

“It’s not that surprising,” Chitnis told MSDF, but “these findings identify that brain atrophy is an important outcome in pediatric MS. The tricky thing about this study was that atrophy needed to be measured against normal brain growth.”

Biologically, the thalamus seems particularly vulnerable, Chitnis told MSDF, something also observed in adults. She pointed out another study that found higher iron levels in the thalamus of children with MS compared to controls (Hagemeier et al., 2013). It has long been hypothesized that iron is important in MS, she said. Improper iron metabolism by some cells, including astrocytes, results in iron being deposited outside of cells, where it may be a trigger for the propagation of MS in the CNS.

In addition to the evidence that MS overpowers the resiliency in young brains to recover from injury, the study also confirms gender differences in healthy growth curves between boys and girls. Girls have higher thalamic volumes relative to brain size.

The team is following up by looking at the rates of brain growth in children with the one-time demyelinating events compared to normal. The team wants to know if—and how—those brains can marshal the resources to get back to normal.

The MRI findings in particular argue for a neuroprotective and repair treatment strategy from the onset of disease, Banwell told MSDF. “We advocate for that in adults, and there might have been a time when we said we didn’t need to worry about that in children,” she said.

Unfortunately, none of the approved MS treatments have been shown to have a major effect on degenerative biology. And none have been tested for pediatric MS. The most promising therapies to protect the brain may not be suitable for children, whose immune systems are also developing. “It’s complicated,” Banwell said. “All therapies need to be trialed in the pediatric population.”

Bar-Or is a member of the Scientific Advisory Board of the Accelerated Cure Project, MSDF’s parent organization.