Researchers at the University of California, San Francisco, have developed a new tool that allows clinicians to track an individual’s disease course over time and compare it to a core data set of other MS patients. The tool is currently in beta-testing at UCSF.

Pierre-Antoine Gourraud, Ph.D., of the University of California, San Francisco, and I huddled around his iPad and gazed at the screen. On it was a magnetic resonance imaging scan of an anonymous patient’s brain. The scan was organized in three panels, showing me front, side, and middle cross sections. With my index finger, I turned the scan around so I could see it from all angles and slid the planes up and down, back and forth, to move through the three-dimensional scan.

“That was a very big, technical challenge of the application,” Gourraud said to me as I watched the brain expand and the sulci undulate as I moved the sliders through three different planes. This interactive three-dimensional MRI scan is one of many features on BioScreen, the new mobile application Gourraud and his colleagues are developing. A description of the device was published online ahead of print in the journal Annals of Neurology (Gourraud et al., 2014). 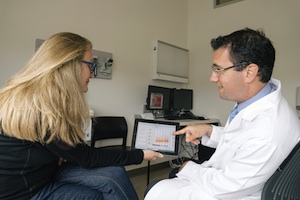 BioScreen is a tablet-based tool that will allow physicians and their patients to track the course of the disease within the individual patient, and then compare it to a large data set consisting of over 600 patients. The core data set comes from information gathered from UCSF researchers in the Expression, Proteomics, Imaging, Clinical (EPIC) study, a longitudinal observational study that collected detailed data spanning MRI, clinical data, genomics, and biomarkers over the course of 10 years.

In his grandest vision, Gourraud imagines a world where every clinician has access to this core data set, which he plans to expand using data from clinics across the globe. Any clinician could then compare the disease course of his or her individual patient with that of the entire group. In the current prototype, the comparison group can be narrowed down based on a number of factors, including but not limited to age, gender, and Expanded Disability Status Scale (EDSS) score.

Perhaps the most dazzling feature of the application is its ability to compare MRI scans with the data from the EPIC study. Clinicians can upload a patient’s MRI scan and then compare that individual’s set of lesions with the core data set, and see if the patient’s lesions fall within what is expected of patients with MS.

It works by aligning the scan with a template based on the averaged MRI scans of the core data set and then comparing the amount of myelin expected in any particular area of the brain with what is observed on the voxel (3D pixel) level. The same template can be used to compare an individual’s MRI scans over time.

UCSF retains the intellectual property rights to BioScreen and is the site of its beta-testing process. Physicians at the university are using it to compare their patients against the individuals from the EPIC study. Gourraud and his colleagues are collaborating with several international groups to try to expand the comparison data. But standardizing such a high volume of information while maintaining its caliber is a challenge. Gourraud also hopes that someday any doctor may be able to enter their own patient’s data into the core data set, but that would also have to follow the same standardized format.

“There is no compromise about the quality of the data,” Gourraud said. Quality data—collected by experts in a research setting—is the key to what makes BioScreen such a potentially powerful tool, Gourraud said.

Gourraud and his colleagues have many additional regulatory hurdles to clear. Those obstacles mainly relate to patient privacy and consent. The individuals in the core data set are all assigned numbers and pseudonyms. The application can also be set to “Anonymous Mode,” in which all potentially identifying personal information is removed and instead individuals are represented only by a number. Nevertheless, releasing medical information to a huge audience is rife with regulatory hazards that Gourraud and his colleagues are taking great care to navigate.

In an email correspondence with MSDF, Gourraud said that he was unsure how long it would take for BioScreen to reach clinics worldwide. Aside from working within the numerous regulations in place to maintain patient privacy, BioScreen would also have to be set up at each individual clinic in a way that ensures security. However, once it is set up, physicians and their patients will be able to log in to the application within the clinic with a user ID and an access code.

But overcoming the obstacles is worth it for the patient, Gourraud said. If people with MS can graphically see where their disease progress is compared to the rest of the population, they may be more adherent to their physician’s recommendations. It may also help physicians make better decisions regarding disease-modifying therapies, as well.

Additionally, the tablet itself as a physical object may strengthen the doctor-patient relationship. Instead of the doctor sitting across a desk from the patient—or worse, facing a computer screen—the two must sit side by side and look at the tablet screen together. Though they still need to validate these claims through additional research, Gourraud and his colleagues suspect that all these factors may provide a more supportive environment to foster good communication and therapeutic alliance between physician and patient.

Certainly, some physicians out there are excited by the prospect of BioScreen. “I think it’s an extremely helpful tool. It’s very innovative. It has the right elements to help clinicians understand clinical progression of MS,” said Augusto Miravalle, M.D., of the University of Colorado, Denver School of Medicine in an interview with MSDF.

Miravalle did voice some concern over some of the metrics used in the application, namely the EDSS score. Since not everyone uses EDSS to measure disability, “if that’s a required element in the tool, that might bring some extra complexity,” Miravalle said.

However, in an email correspondence with MSDF, Gourraud said that “virtually any measure available in both the patient and the reference can be used” in BioScreen.

Kassandra Munger, Sc.D., of Harvard School of Public Health told MSDF that BioScreen also has great potential as a research tool. Given its capacity for big data, BioScreen may shed light on some as-yet-unknown aspects of MS disease course and subtypes.

Gourraud said that BioScreen originally began as a side project of his. But as the potential impact of the tool became clear, he shifted greater focus on it. The ultimate goal, the way Gourraud sees it, is to take big data and provide it to doctors so that their patients can get better care by removing some of the guesswork when making decisions surrounding disease-modifying therapies. “It’s all about the patients,” he said.

Thank you for this vibrant article , Cynthia.  Bioscreen is really a window into reference dataset(s) that we hope will help patients with more integration with datasources

This is an excellent idea and tool for clinicians but not much use for patients themselves, as clinicians are only really comparing data recorded at relatively long intervals (e.g. MRIs only done every six or twelve months). Because of my very short term memory problems (e.g. was this week/last week a good one or a bad one?) I set up my own tracking tool using a spreadsheet, which monitors around 30 symptoms and impacts from my MS and my medications, and incorporates a daily diary for events and activities which could impact on my day to day functioning. I worked out a numerical baseline score based on my level of functioning at the time of starting my data recording, and I allocate a score each day for each item – it only takes about 5 minutes a day to keep it all up to date. The cells have conditional formatting applied which colours each cell according to the score allocated, and provides a clear visual indicator of whether things were stable, better, or worse. So far I have seven months of data recorded, and it has been an incredibly useful tool for identifying trends, impacts, and correlations between symptoms, medications, and events – some of which have been totally unexpected. It has also been an important aid in making some critical decisions about medications as impacts from their side effects have become apparent over time. While I understand that there are some symptom trackers out there, I am not aware of any that are specifically designed for MS tracking. Most MS patients have appointments with their neurologist which are months apart. If a proper tool were developed for patient use it would enable identification of trends and correlations, and help patients to make more informed joint decisions with their treating clinicians about future treatments etc, as well as providing clinicians with clear evidence of how their patients are going during the intervals between appointments.