A recent study suggests that MS patients can improve walking performance using a device called the Portable Neuromodulation Stimulator. By stimulating the tongue, researchers believe they can facilitate neuroplasticity in the motor nuclei of the cerebellum.

New research published in the Journal of Neuroengineering and Rehabilitation (Tyler et al., 2014) suggests that a device called the Portable Neuromodulation Stimulator (PoNS) may aid physical therapy in multiple sclerosis. The device has an array of electrodes that, when placed on the tongue, is thought to stimulate cranial nerves V and VII. The device’s proponents theorize that—when used in conjunction with exercise—PoNS facilitates neuroplasticity in motor functions through stimulation of the cerebellum via the cranial nerves.

PoNS is one of several types of therapy under development in the relatively new field of neuromodulation. The North American Neuromodulation Society generally defines neuromodulation as “a therapeutic alteration of [neurological] activity either through stimulation or medication, both of which are introduced by implanted devices.” The basic premise is to use neuroplasticity to the advantage of therapy by stimulating target neurons to facilitate the strengthening of neural connections.

The makers of and advocates for PoNS say it has many benefits. Unlike other neuromodulation techniques such as deep brain stimulation, PoNS is noninvasive. The other major draw for the device is its portability, allowing patients to use it in the comfort and privacy of the home.

But not everyone is convinced by the science behind PoNS. The theories behind this form of neuromodulation are inherently hard to prove, and the positive results PoNS trials have found could easily be explained as artifacts of the study design. Nevertheless, proponents of neuromodulation remain optimistic about the science behind their approach. Is it really possible that stimulating the tongue can improve walking ability? 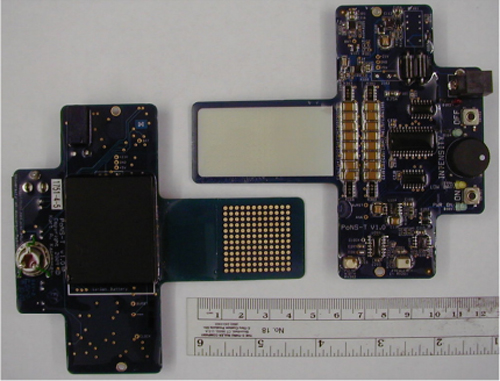 The small device is roughly T-shaped. It’s held in place by the patient’s lips, and it has a tab that rests on the top front portion of the tongue. On the tab are 144 exposed electrodes arranged in a 3 cm × 3 cm square. The electrodes are arranged in nine 4 × 4 sections, and only a single electrode is pulsed at any given time. In the study, stimulation came in triplets of positive pulses across 50 microseconds. The pulses were delivered at a rate of 200 pulses per second every 20 milliseconds.

Twenty people with MS participated in the study. The researchers did not discriminate by MS subtype. In order to participate, the subjects had to have Expanded Disability Status Scale scores between 3.5 and 6.0 and the ability to walk on a treadmill for 20 minutes without rest, using a handrail as needed. The researchers excluded any subjects with major comorbidities.

The study was broken into two major phases over 14 weeks. The first 2 weeks involved gait training using the PoNS device in the lab twice a day, 5 days a week. Over the following 12 weeks, the subjects were instructed to do the same routine at home. The protocol involved 20-minute movement isolation exercises without the device, 20 minutes of balance training with the device, and 20 minutes of relaxation training with the device.

The investigators assessed the results using the Dynamic Gait Index (DGI). They established the baseline walking ability for each of the participants in the first session and then scored their progress against the baseline from there.

The researchers believe that stimulating the tongue with the device excites cranial nerves V and VII, which run to the cerebellum. Through activating the motor centers of the cerebellum (the pons Varolii and the medulla), the researchers believe they can affect motor function. The timing of the pulses is thought to facilitate neuroplasticity, according to corresponding author Kimberly Skinner, PT.

According to the investigators, it’s important to do this all in conjunction with physical activity. “The brain and body must work at a level that is challenging in order to improve,” Skinner said to MSDF in an email.

fMRI studies by the same group suggest that the therapy works (Wildenberg et al., 2010). Using a similar method of neuromodulation, the team assessed postural sway in balance-impaired individuals who received the therapy versus those who did not. fMRI scans suggested that there was notable improvement in “visual sensitivity to optic flow,” according to the paper.

Not everyone was readily convinced by the study’s findings. “The study is encouraging and appears to show differences between the control group and the treatment group,” Paul Taylor, M.D., a neurologist at the Salisbury District Hospital in the United Kingdom, said in an email to MSDF. “The participant numbers are relatively small, and there appears to be some difference between the groups in terms of disability and the length of time they have had MS. These differences may contribute to the effects observed.”

David Weisman, M.D., a neurologist at Abington Memorial Hospital in Pennsylvania, said he was pessimistic about the future of PoNS. He expressed a great deal of skepticism over the science, saying, “The brain’s a big place, and stimulating California is not going to have a lot to do with New Jersey. They’re just not connected in that way.”

Weisman also expressed concern about the blinding in the study. He suggested that the members of the active group would be likely to perceive a stimulus on their tongue, perhaps inspiring them to comply more closely with the exercise regimen and remain optimistic about their progress.

“There’s a lot of examples in medicine where at first blush it seems like it will work; there’s a very causal relationship between a procedure and a benefit,” Weisman told MSDF. “Patients report this great outcome because they buy into it as well. Then the studies are done and: no benefit. Meanwhile, millions of dollars are wasted.”

Asked to respond to this criticism, Skinner replied, “There are as many different opinions as there are neuroscientists and neurologists. We have heard these comments before. The problem is that many of our theories about the brain are just that, theories. Currently, there is not an optimal way to test the theories.”

Skinner said that the PoNS device could hit the market in 2016 at the earliest. She said there are many different trials in different phases for various conditions. “In most cases, it is still in the exploratory phase. Our goal is FDA approval so that the device can be used for therapy. We also plan to try the PoNS device with different populations who have neurological conditions such as traumatic brain injury, stroke, and Parkinson's disease,” Skinner said.

Amid his doubt, Weisman also expressed some hope for the device: “The thing is, in science, you have to keep multiple lines of inquiry alive and healthy. It seems implausible on its surface, but there is a rich history of things that seem implausible that work out pretty well.”

Skinner and her team received funding for this study from a private foundation that wishes to remain anonymous. Team members Mitchell Tyler, Kurt Kaczmarek, and Yuri Danilov also have financial ties to Advanced NeuroRehabilitation LLC and NeuroHabilitation Corp. Both companies have intellectual property rights in the field of neuromodulation. Weisman and Taylor reported no competing interests.