New research draws a parallel between the pathological Wnt pathway of colon cancer and maturational arrest in oligodendrocyte progenitors. This surprising connection opens the door for a new way to look at white matter injury and MS.

Undifferentiated oligodendrocyte progenitor cells (OPCs) can be found within many MS lesions. If only they could become oligodendrocytes, these cells could remyelinate damaged axons, but strangely, they remain frozen in their undifferentiated state. According to a study published recently in Nature Neuroscience (Fancy et al., 2014), one of the Wnt signaling pathways plays an important role in the fate of these important precursors of myelin-forming cells.

“The Wnt pathway is a critical determinant of oligodendrocyte differentiation,” the study’s lead author, Stephen Fancy, DVM, Ph.D., of the Newborn Brain Research Institute at the University of California, San Francisco, told MSDF. The study described a series of transcription factors related to the Wnt pathway, and the authors noted that many of these transcription factors also play an important role in tumor formation in colon cancer.

The Wnt pathway is ubiquitous among organ systems and organisms. The Wnt story began in 1984, when researchers Roel Nusse and Harold Varmus described a gene that, when artificially activated, caused mammary tumors in mice (Nusse et al., 1984). They named it Int1. Previously, Christiane Nüsslein-Volhard and her research team had discovered the gene responsible for the development of wings in Drosophila melanogaster and named it Wingless, or Wg (Nüsslein-Volhard and Wieschaus, 1980). Soon thereafter, it was discovered that Wg and Int1 were identical, so the names were combined into Wnt.

Since then, Wnt has been implicated in many different functions, such as embryonic development, stem cell maintenance, and cell differentiation. The pathway has also been divided into two major subgroups: canonical and noncanonical. In the canonical pathway, Wnt interacts with the protein β-catenin. The noncanonical Wnt pathways bypass β-catenin.

In the colon, as well as in other organ systems, the canonical Wnt pathway is constantly active but at a very low level. Around 1993, researchers linked colon cancer to Wnt via a known carcinogenic mutation in the adenomatous polyposis coli (APC) gene. APC normally degrades β-catenin, which in turn keeps the Wnt signal depressed. However, in colon cancer, APC fails to degrade β-catenin, and thus Wnt is overexpressed, leading to tumorigenesis downstream.

In their recent study, Fancy and his colleagues discovered that the same tumorigenesis mechanism may be responsible for the arrest of OPC differentiation into oligodendrocytes. 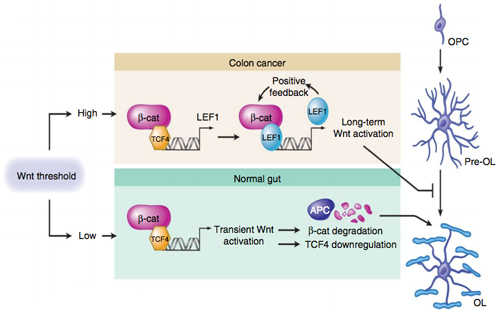 The team started by developing mice lacking a functional APC gene. These mice were characterized by an abundance of OPCs that failed to mature into oligodendrocytes. From there, the team characterized the transcription factor LEF1 as a marker for the high-activity Wnt signaling.

Next, the team examined another transcription factor, called SP5. SP5 is part of the SP/KLF family of transcription factors and showed the highest levels of upregulation in the OPCs with high Wnt activity. After confirming that SP5 is a direct target of the Wnt pathway, the team determined that it inhibited the expression of myelin basic protein (Mbp) in OPCs.

Conversely, a related transcription factor—SP1—promotes the expression of Mbp in mature oligodendrocytes. However, in APC-deficient mice, SP5 outcompetes SP1, thus playing a major contributing role to the inhibition of OPC differentiation and myelination.

Finally, the team looked at gene expression in humans with white matter injuries who suffered hypoxic ischemic encephalopathy. In the brain lesions of these patients, the team found several markers associated with high-activity Wnt signaling, including LEF1 and SP5. Additionally, they saw ETS2, DUSP4, and RNF43. All of the OPCs that expressed high levels of LEF1 and SP5 were also APC-negative.

“What was most surprising for me was that the body maintains this similarity between different organs,” Fancy said. “It was very surprising to see something new—oligodendrocytes—from a different angle. By mining colon cancer, we can find new genes relevant to oligodendrocytes.”

Fancy said he is hopeful that his team’s discoveries will open the door for targeted gene therapies in the future. Qing Richard Lu, Ph.D., of the University of Cincinnati Department of Pediatrics echoed Fancy’s sentiments.

“Any treatment that reined in Wnt activation could be a potential therapy for promoting myelin formation,” Lu told MSDF. Lu was not involved in the Nature Neuroscience study.

On the other hand, Steven Goldman, M.D., Ph.D., and Joana Osorio, M.D., of the University of Rochester expressed doubts about the feasibility of Wnt pathway therapies in a commentary accompanying the Nature Neuroscience study (Goldman and Osorio, 2014). In the article, Goldman and Osorio point out that a robust network of transcription factors mediates the maturational arrest of OPCs, so treatment may be intractably complex.

Indeed, Michael Kahn, Ph.D., of the University of Southern California Norris Comprehensive Cancer Center recently reviewed attempts to target the Wnt pathway in cancer treatment (Kahn, 2014). Those attempts are still in the earliest phases of drug development. Kahn reported that one avenue researchers are experimenting with is tyrosine kinase inhibitors and some small-molecule drugs in an attempt to specifically target β-catenin and restore normal Wnt signaling.

Fancy said that one major obstacle in developing therapies that target the Wnt pathway is making sure they are specific to the target cell. But he and his colleagues have already had some success in correcting overactive Wnt signaling.

“In fact we tested one in a previous publication,” Fancy told MSDF (Fancy et al., 2011). “We used a Wnt inhibitor drug [XAV939] used in a screen for colon cancer, and we demonstrated that you could affect the kinetics of remyelination.”

Pieces of the puzzle

The Wnt pathway is just one small piece of the puzzle in understanding multiple sclerosis. Arrested OPCs are characteristic of only some lesions in MS, so even if a Wnt-related treatment could be found, it would only help in remyelinating areas where Wnt signaling had gone awry.

Goldman also posed some important questions. “[The Nature Neuroscience study] tells us a lot about what’s going on in early white matter injury. It’s a pretty good bet that these are processes involved in the failure of remyelination in adult MS as well. The challenge is understanding why it happens. … Why is it sustained in the way it is? Can it be targeted specifically?”

Fancy’s team is funded by the National Multiple Sclerosis Society, the U.S. National Institutes of Health, and the Medical Scientist Training Program at the University of California, San Francisco. Fancy, Goldman, and Lu all declared no conflicts of interest.