GM-CSF: A Target for Brain Inflammation Intervention in MS?

Inhibiting granulocyte-macrophage colony-stimulating factor might be a new therapeutic route to treat MS, and a novel T cell subtype may lead the way

In an elegant series of experiments, Christina E. Zielinski, M.D., a clinical scientist at the Charité Universitätsmedizin Berlin, Department of Dermatology, Venereology and Allergology, and the Berlin-Brandenburg Center for Regenerative Therapies, and her colleagues discovered and described a new subclass of T helper cells  whose cytokine output is predominantly granulocyte-macrophage colony-stimulating factor (GM-CSF), a cytokine associated with MS flares. The team’s results were published in the June 18, 2014, issue of Science Translational Medicine (Noster et al., 2014).

The ups and downs of cellular immunity

The challenge of immunotherapy is in isolating and directing an effect. Cytokines, which include the interleukins, interferons, chemokines, and tumor necrosis factors, present a particularly complex picture. These are small proteins that function in signaling but are neither hormones nor growth factors.

Cytokine levels ebb and flow in time and tissue. Several types of cells secrete GM-CSF: macrophages, mast cells, and natural killer cells, as well as cells from outside the immune system—endothelium and fibroblasts—besides all T helper cells, to some degree. GM-CSF fights fungal infections and stimulates white blood cell proliferation, but in excess it inflames the joints in rheumatoid arthritis and the brain in MS.

The researchers, for now, call the cells they’ve identified “GM-CSF-only producing T cells,” distinguishing them by their propensity to produce GM-CSF as the predominant cytokine.

T helper cells are classified by their most abundant cytokine products, the transcription factors that control their output, and the types of pathogens they target by alerting and activating other types of immune system cells. Trying to classify T cells is tricky, however, because they may switch types to suit circumstances. 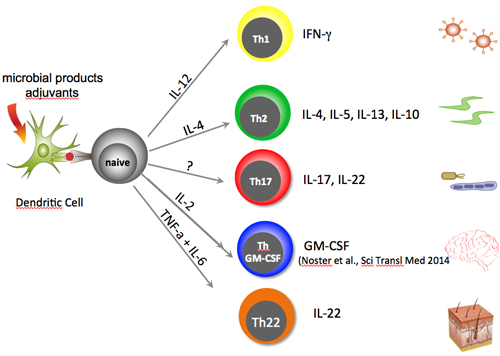 Mice are typically terrific models of human disease, but they produce GM-CSF, mostly along the Th17 axis. The new findings show that the bulk of production in humans falls to a “previously uncharacterized” set of T cells that coproduce a transcription factor (T-bet) linked instead to the Th1 axis. Even more unexpectedly, the experiments revealed antagonistic control of GM-CSF and IL-17. “The molecular regulation of this cytokine is therefore completely different between mice and humans,” Zielinski told MS Discovery Forum.

In mice with experimental autoimmune encephalomyelitis (EAE), myeloid cells entering the CNS stimulate dendritic cells to release IL-23, which stimulates proliferation of Th17 cells that propel the chronic inflammation. The investigators, dubbing GM-CSF the “missing link” that connects IL-23 secretion with stimulation of Th17 cells in mice, hypothesized a role for the cytokine in MS. The situation is ambiguous, however, because in mice Th1 cells can also produce significant GM-CSF (Codarri et al., 2011).

In an initial set of experiments, the researchers isolated Th1, Th2, and Th17 cells from peripheral blood of healthy donors, identifying the cells by patterns of chemokine receptors in a previously developed assay (Zielinski et al., 2012). They then restimulated the cells ex vivo and assessed the output of GM-CSF.

“We analyzed the intracellular cytokine profile of memory T helper cells by flow cytometry and noticed that a small fraction produced only GM-CSF in the absence of any other lineage-defining cytokine. To further corroborate the existence of a novel T helper cell subset—the GM-CSF-only producing T cells—we also analyzed transcription factors and other molecular regulators of T cell identity,” Zielinski explained.

Specifically, the cells do not make the trio of transcription factors that characterize Th17 cells, nor do they produce IFN-γ, IL-17, IL-22, or IL-4. Additional experiments identified a unique set of surface chemokine receptors (CXCR3, CCR6, CCR7, and CCR10) that indicate migration capabilities consistent with the Th1 axis. CXCR3 and CCR6 in particular facilitate T helper cell entry into the CNS.

The distinctive cells also demonstrated different priming requirements and responses to various cytokine baths than Th17 cells demonstrated, as well as increased GM-CSF synthesis in response to IL-2. The researchers also found that the ratio of STAT5 to STAT3 transcription factors that activates the GM-CSF-producing T cell subset is opposite that for IL-17 expression.

Overall, the experiments “revealed that GM-CSF-only producing cells do not share characteristics of other previously identified T helper cell subsets and that GM-CSF was differently regulated in humans as compared to mice,” Zielinski said. But the researchers are hesitant to officially designate them Th-GM-CSF cells just yet. One reason is that they haven’t identified a transcription factor that predominantly controls production of the cytokine.

GM-CSF as a target in MS?

To explore the MS connection, the researchers isolated T helper cells from the cerebrospinal fluid of people with active MS flares and found six times the level of GM-CSF expression as in controls with noninflammatory neurological conditions or in healthy individuals. Expression of GM-CSF in peripheral blood was about the same in all three groups. And so MS may join rheumatoid arthritis as a condition amenable to GM-CSF manipulation.

Targeting IL-17 production, used to treat psoriasis, may offer an example of the strategy of manipulating cytokine levels (Waisman, 2012). “Ustekinumab for psoriasis is directly based on recent insights into the priming requirements of pro-inflammatory T helper cell subsets. Our recent finding that GM-CSF-producing T helper cells exist with potentially pathogenic functions in multiple sclerosis makes GM-CSF an interesting therapeutic target for autoimmune brain inflammation in humans,” Zielinski said. In fact, MorphoSys AG in collaboration with GlaxoSmithKline has just completed a phase 1b clinical trial for a human anti-GM-CSF antibody (MOR103) to treat MS (#NCT01517282 at clinicaltrials.gov). The results of this trial are as yet unpublished.

The role of IL-17 in MS may be opposite that in psoriasis. “What’s really important in the Science Translational Medicine paper and seems different between the mouse and the human systems is that IL-17 seems to inhibit the development of these GM-CSF-producing T helper cells, meaning that IL-17 would be protective,” Ari Waisman, Ph.D., director and professor of immunology at the Institute for Molecular Medicine, University Medical Center of the Johannes Gutenberg University Mainz in Germany, told MS Discovery Forum. Waisman was not involved in the Science Translational Medicine study.

Waisman’s group has shown that Th17 cells in mice are developmentally plastic and can become more like Th1 cells that secrete GM-CSF, which may explain some of the discrepancy between mice and humans (Kurschus et al., 2010). Treating mice with anti-IL-17 does not seem to affect the severity of EAE, he added.

“The take-home message from the Science Translational Medicine paper is that treatment with anti-IL-17 for MS patients may not be effective, but one should try to block GM-CSF. Indeed, such attempts are on the way for other diseases such as RA and are likely to also reach MS patients,” Waisman concluded.

Dr. Lutz Harms has received compensation from Novartis, Biogen Idec, Merck Serono, and Bayer for speaking and from Novartis, Sanofi, and Biogen Idec as a member of the advisory board. The other authors and Dr. Waisman declared no commercial or financial conflicts of interest.