Widely touted in multiple sclerosis patient communities, low-dose naltrexone does appear to improve disease scores in about half of mice with an experimentally induced version of MS. Researchers found a similar pattern of results with met-enkephalin. 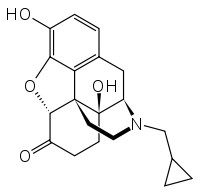 SAN DIEGO—A growing subculture of MS patients and clinicians has been touting low-dose naltrexone (LDN) as a wonder treatment for multiple sclerosis, despite scanty scientific evidence. But researchers at Pennsylvania State University, Hershey, have taken the drug back to the lab and shown that the opioid-receptor antagonist modifies established disease in a mouse model of relapsing-remitting MS. Met-enkephalin, an endogenous opioid peptide the authors call opioid growth factor (OGF), similarly dampened disease.

Jarred Younger, Ph.D., a clinical researcher at Stanford University, studies LDN for chronic pain but was not involved in the studies presented at the meeting. “LDN (in particular) and OGF are the center of groundswell movements in the U.S. and U.K. that are rarely seen with pharmaceutical agents, … [but] the circulating claims of LDN have pulled way ahead of the science,” Younger wrote in an email to MSDF. That said, “Zagon and his team have progressed in a disciplined way to support the hypothesis that OGF (and LDN) could reverse the pathophysiological mechanism of multiple sclerosis. Their work is solid.”

Hammer induced relapsing-remitting experimental autoimmune encephalomyelitis (RR-EAE) by injecting mice with proteolipid protein followed by pertussis toxin. The group had previously shown that OGF could slow disease progression when delivered alongside the pathogenic injections (Hammer et al., 2013), but the new work tested the treatments 10 days later, once motor signs of disease had set in.

For 40 days, Hammer assessed the mice daily for tail tonicity, gait, righting reflex, and limb strength, and assigned a point value to each behavior. Those points were then summed to determine each mouse's daily disease score on a 10-point scale.

About half the mice treated with either OGF or LDN responded to treatment, displaying significantly lower disease scores over the course of 40 days than did control mice that received saline. Disease scores in the nonresponding mice worsened similar to those of controls. The responders also spent fewer days with moderate to severe disease scores, had fewer relapses, and spent more time in remission than did controls or nonresponders. By 40 days, over 70% of the responders to LDN had gone into total remission—with a disease score of 0.5 or lower—lasting an average of 11 days, whereas only one of nine saline-treated mice saw a total remission lasting 4 days.

Hammer then examined sections from the mouse spinal cords stained with Luxol fast blue, a marker of myelin, and neutral red, a nonselective cellular stain. At 14 days, all the mice treated with either OGF or LDN showed significantly less demyelination than controls. After 40 days, mice in the responder group showed very little demyelination compared to controls and nonresponders.

The authors believe that the beneficial effects of both naltrexone and of Met-enkephalin were achieved through the OGF receptor (OGFr), which they identified and sequenced in 1999 (Zagon et al., 1999). Whereas most opioid receptors sit on the cell surface, the OGFr lives on the nuclear membrane, and its activation by OGF stifles cell proliferation by inhibiting specific kinases required for DNA replication during the cell cycle, McLaughlin told MSDF. But although OGFr is found on all replicating cells, McLaughlin said, activating the receptor “is in no way apoptotic, and it doesn’t alter differentiation or migration of cells. So we’re not killing cells, we are slowing their replication.”

It might seem counterintuitive to use an opioid-receptor antagonist to treat pain or immune disease, but the drug paradoxically increases endogenous opioids. “LDN actually blocks opioid receptors for a short time,” McLaughlin told MSDF, “and that causes upregulation of all endogenous opioid peptides and some receptors.”

Naltrexone is approved by the U.S. Food and Drug Administration for treating alcohol and heroin addiction. For addicts, a dose of naltrexone blocks opioid receptors and dampens the euphoric effects of opiate drugs. But the dosages used by some MS patients and in the current experiments are about one-tenth of those used for addiction treatment—high enough to trigger opioid upregulation, but low enough that the receptors are available after a short time.

Opioid receptors may not be the only ones affected by the drug and by endogenous opioids. Growing evidence shows that other receptors may bind naltrexone and endogenous opioids, perhaps with benefits in disease. For example, a study from Linda Watkins and colleagues at the University of Colorado, Boulder, showed that naltrexone inhibited signaling through the toll-like receptor type 4 (TLR4) and reversed chronic pain independent of MOR in a rodent model (Lewis et al., 2012). “Opioid receptors may be but a small part of the story now that we have found other receptors,” Younger said. “I am sure there are effects of Met-enkephalin and LDN that we don’t even know about yet.”

Neurologist Anthony Turel, M.D., treats MS patients at Penn State Hershey Medical Center—over 200 of them with a prescription for LDN, fillable only through a compounding pharmacy. Turel is currently analyzing those patients’ charts in a retrospective study of their response to the drug. For various reasons, some patients chose LDN as their first or only treatment for MS. “I have a few patients that started on naltrexone who, over the years, anecdotally, have done fairly well even without other therapies,” he told MSDF.

Whether OGFr underlies the benefits seen in the current studies remains somewhat unclear, but some studies suggest how OGFr activation might slow MS pathology. McLaughlin and colleagues previously reported that exogenous OGF suppressed proliferation of B cells (Zagon et al., 2011) and T cells (Zagon et al., 2011) in vitro independent of classical opioid receptors. “If that occurs, you would likely see benefit on the actual course of MS,” Turel told MSDF.

Although a couple of clinical trials have attempted to measure those benefits, the results are murky, perhaps because LDN faces some specific hurdles. For example, agencies that fund large trials generally want to see a drug dose-response curve, Turel said, “but that won’t work with naltrexone” because of its peculiar mechanism of block followed by opioid upregulation. “If you block receptors at a higher dose, you just block them for a longer time,” Turel said.

One small clinical trial hinted at benefits for MS, but the small sample size and a significant dropout rate dampened its power (Cree et al., 2010). Another study showed that primary progressive MS patients on LDN showed mild benefits in quality of life, but perhaps even more importantly it showed that the drug elevated subjects’ endogenous endorphins, even weeks after the drug had been discontinued (Gironi et al., 2008). A third study detected no clear benefit of LDN on quality of life in MS patients, but those investigators used a crossover design, in which subjects’ outcomes are compared on and off the drug, sometimes in that order (Sharafaddinzadeh et al., 2010). But according to the findings of lasting elevated endogenous opioids, “you can’t do a crossover study, because you have to wait possibly months before the system readjusts and comes down,” Turel said.

Although clear evidence for benefits of LDN in MS patients—and how it achieves them—is still missing, support is growing for further study of this opioid antagonist. “My gut feeling is that there are people who respond to this and do better,” Turel said. Only time—and large-scale clinical trials coupled with more basic research—will tell.

The studies were funded by the Paul K. and Anna E. Shockey Family Foundation. Leslie Hammer, Jarred Younger, and Anthony Turel have nothing to disclose. Patricia McLaughlin and Ian Zagon disclose that they hold the IP patents on OGFr related to detection and use of OGFr, but they have no conflicts to report related to MS or EAE.