This “tale of three cities” showed a clear geography to the disease within a single country, again cementing a north-south gradient in populations with very similar genetic origin. Jim McLeod had initiated and driven these studies years previously, which remain a fertile source of research within Australia.

Magnetic resonance imaging of the brain has become an invaluable technique for the diagnosis and management of people with multiple sclerosis, as well as for research into its pathogenesis and treatment. This classic paper from Ian McDonald’s group is not the first study of multiple sclerosis using MRI, but it is, in our view, the first MRI study to bring new understanding of the pathogenesis of multiple sclerosis. In the study, the researchers scanned 10 multiple sclerosis patients (eight of whom were then experiencing a relapse) with the help of the paramagnetic agent, gadolinium DTPA, to determine whether the technique can distinguish between old and new lesions. For the first time, the dynamics of plaque formation could be studied and some of the controversies arising from static pathological studies resolved. For most contemporary readers, the big news was the revelation of the frequency of new lesions in people with apparently stable multiple sclerosis. For research, therefore, MRI could provide a sensitive measure of brain inflammation. Additionally, gadolinium-enhancing lesions could be used to reduce the duration and cohort sizes of clinical trials. Further work suggested that these lesions could be used as an outcome measure in clinical trials.

Suggested by Teruna J. Siahaan
This article describes the importance of alpha4-beta1 integrin on leukocyte infiltration through the blood-brain barrier (BBB). This finding was used as the basic principle to develop natalizumab (Tysabri®) for treating MS patients. Natalizumab blocks leukocyte adhesion to vascular endothelium of the BBB and prevents infiltration of leukocytes into the brain.

suggested by Gavin Giovannoni from his Multiple sclerosis Research blog

What can we learn from studying infections in MSers?
"The paper below may be old but it is as relevant today as it was back in 1994 when it was published. Infections, in particular viral infections, trigger relapses. You are more than twice as likely to have a relapse in the week prior  to, or the 5 weeks after, an infection. The infections in this paper were mainly symptomatic upper respiratory infections due to viruses, so the risk may be much higher if we could count so called minor or asymptomatic infections."
"What do I mean by asymptomatic infections? We are continuously being exposed to new viruses that infect us but don't cause symptoms. An example of this is the JC virus that causes PML in MSers on natalizumab. When we initially become infected with the JC virus it does not cause any symptoms; it simply gets into our body and stays there. In the majority of us this is fine and it is only if we become immunocompromised do we have a chance of this virus mutating and causing PML. Similarly, for the majority of us when we get infected with Epstein-Barr virus (EBV) it does not cause symptoms; only the minority of us get glandular fever or infectious mononucleosis. The same applies for the another herpes virus called CMV or cytomegalovirus; asymptomatic infection is the rule. What is interesting about the herpes viruses is that they become latent in the body and reactivate every now and  then. These reactivations of latent viruses are usually asymptomatic but are strong enough to stimulate the immune system and may trigger relapses. In fact there is some weak evidence that this may be the case."
"When I did my PhD I studied an marke of immune activation on a daily basis in MSers over many months. I found that immune activation usually preceded the occurrence of new MRI lesions by a few weeks. Please remember that new MRI lesions are the equivalent of subclinical relapses. I therefore proposed in my thesis that latent viral reactivations may be the factor responsible for this immune activation, which then triggers MS disease activity. This is the reason why I became so interested in the viral MS hypothesis. These viral reactivations don't have to apply to exogenous viruses only, i.e. viruses that come from outside the body, but could also apply to endogenous viruses, i.e. viruses that reside in our bodies or genome. The latter is referring to human endogenous retroviruses (HERVs). This is one of the hypotheses that is underpins the Charcot Project. Can we treat MS by reducing endogenous viral reactivation (HERVs)? Can we treat MS by preventing reactivation of latent herpes viruses, in particular EBV?"
"The observation of infections triggering relapses is not limited to viral infections, but also applies to bacterial infections, in particular urinary tract infections. This is why I am on a mission to improve the management of bladder problems in MSers with the aim of preventing or reducing bladder infections. There is some emerging evidence that MSers with recurrent bladder infections do worse than MSers without bladder infections."
"So you can see there is still a lot we don't know about MS. The role of infections is just one aspect we need to study in more detail. Who knows by doing this we may pin down the cause of MS? I am already a believer in EBV being the cause. I am convinced that if we can stop people becoming infected with EBV we will prevent them getting MS and that if we treat MSers with drugs that eliminate EBV from their bodies we will stop MS in its tracks. As I have said before once you have become infected with EBV it remains latent inside B cells; drugs that target B cells by transiently depleting them are the most effective drugs we have (alemtuzumab, rituximab, ocrelizumab, mitoxantrone, cladribine, bone marrow transplantation). What about natalizumab and fingolimod? Natalizumab stops B cells crossing from the blood into the brain and spinal cord and fingolimod traps B cells in lymph nodes. What all these drugs have in common is the B cell. My money is therefore on B cells and EBV as being the therapeutic target in treating MS." 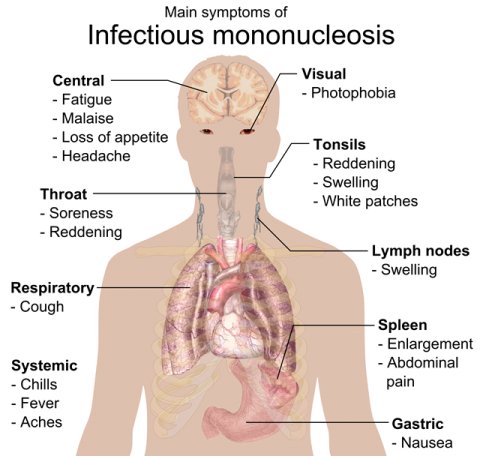 Panitch HS. Influence of infection on exacerbations of multiple sclerosis. Ann Neurol. 1994;36 Suppl:S25-8.
Background: Exacerbations of MS are triggered by exogenous events, the best documented being viral upper respiratory infections (URIs), which can stimulate secretion of cytokines such as interferon-gamma (IFN-gamma) by immune cells.
Methods: In conjunction with a recent clinical trial of systemic interferon-beta (IFN-beta) in relapsing-remitting MS, we studied the occurrence of viral infections and their correlation with MS attacks. Thirty MSers kept daily logs, noting URI symptoms in themselves, family members, and co-workers. MSers were examined every 3 months, or whenever an attack of MS occurred, and were tested for antibodies to common upper respiratory pathogens.
Results: A strong correlation was found between MS attacks and URIs. There were 168 URIs in 2,792 MSer-weeks, including 996 weeks at risk (the interval beginning 1 week before and ending 5 weeks after onset of URI symptoms) and 1,796 weeks not at risk. Nearly two-thirds of attacks occurred in periods at risk. Attack rates were 2.92 per year in weeks at risk compared to 1.16 per year in weeks not at risk, a significant difference (p < 0.001). High-dose interferon reduced the frequency of MS attacks, but had no effect on the number of URIs.
Conclusions: Although a specific virus could not be incriminated, we concluded that URIs of presumed viral origin are an important trigger of MS attacks, and that treatment with IFN-beta reduces the attack rate, but not by preventing URIs. Rather, it may modulate responses to viral infection that would otherwise lead to immune activation and clinical symptoms.
Classic Paper
Protein microarrays guide tolerizing DNA vaccine treatment of autoimmune encephalomyelitis.
Robinson WH, Fontoura P, Lee BJ, de Vegvar H NE, Tom J, Pedotti R, DiGennaro CD, Mitchell DJ, Fong D, Ho PP-K, et al.
Nat Biotechnol. 2003 Sep; 21(9):1033-9. Epub 2003 Aug 10. PMID: 12910246. Abstract

Suggested by May Han

Multiple sclerosis (MS) is an autoimmune demyelinating condition that mainly affects young adults worldwide. Despite the advances in MS research, the autoantigen(s) that causes this condition remains to be elucidated. Robinson et al. in their seminal 2003 Nature Medicine paper utilized the reverse proteomics approach of identifying complex autoantibodies from human and mouse (EAE) samples. They developed a protein array to identify autoantigens and validated these targets in the EAE model. This paper relays critical understanding related to MS pathogenesis at multiple levels; it utilizes cutting-edge technology and bioinformatics tools to identify disease signature(s) in MS with the aim of developing tolerizing therapy in autoimmune diseases including MS.

The truly classic studies of a role for EBV in the risk of multiple sclerosis are those from the U.S. military cohort, even though they are quite recent. With the large study sample and blood taken on multiple occasions, the studies have allowed a comprehensive examination of the timing of EBV infection and development of MS. Findings on a time window from infection to MS onset, of 100% conversion to seropositivity before MS onset in those who were initially seronegative, and increases in EBV antibody titers in late adolescence in those who would go on to develop MS compared to healthy controls, are fascinating and provide a strong contribution to progress in this field of study.

Suggested by May Han

Multiple sclerosis (MS) and neuromyelitis optica (NMO) are inflammatory demyelinating disorders that affect the central nervous system, and their clinical presentations are often difficult to differentiate. Identification of an autoantibody, NMO-IgG (anti-aquaporin 4, AQP4), has made a major step in diagnosing NMO. However, the issue still remains for NMO-IgG negative spectrum of disorders and MS cases that primarily affect the optic nerve and spinal cord. Work by Dr. Lucchinetti's group at the Mayo Clinic distinguishes the pathological features that clearly distinguish MS from NMO. Moreover, pathogenesis of NMO was elaborated by careful analysis of the postmortem NMO tissue. This article teaches us how much we can learn about complex disorders from analysis of the diseased tissue.

The truly classic studies of a role for EBV in the risk of multiple sclerosis are those from the U.S. military cohort, even though they are quite recent. With the large study sample and blood taken on multiple occasions, the studies have allowed a comprehensive examination of the timing of EBV infection and development of MS. Findings on a time window from infection to MS onset, of 100% conversion to seropositivity before MS onset in those who were initially seronegative, and increases in EBV antibody titers in late adolescence in those who would go on to develop MS compared to healthy controls, are fascinating and provide a strong contribution to progress in this field of study.