Now that we’ve seen how researchers came to the conclusion that NMO differs from MS, let’s take a closer look at the current understanding of its pathogenesis

About three-quarters of NMO patients have the aquaporin-4 antibody, a number that has been steadily increasing as more sensitive assays have become available. But does the antibody cause NMO, or is it just a marker for the disease?

One thing is clear: Its target, aquaporin 4, is a widespread protein in the CNS. It forms water channels on astrocytes, the most common cells in the brain and spinal cord. These channels enable water to flow across the astrocytes’ cell membrane, so they keep the brain from swelling by allowing excess water to enter the bloodstream. Astrocytes also clear away harmful substances from the space around nerve fibers. These include glutamate (which can be harmful in excess) and potassium (to enable nerve cells to fire again after activity). Astrocytes also provide neighboring cells with nutrients and support oligodendrocytes’ ability to form the myelin sheath that insulates nerve fibers. 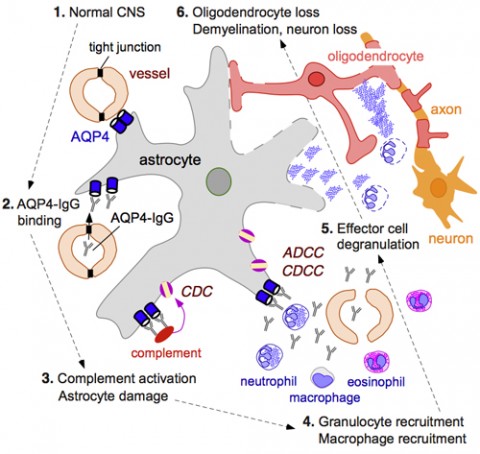 When researchers checked blood samples from people who eventually developed NMO taken before they had symptoms, they found that most of them had had the aquaporin-4 antibody in their blood for a while without developing symptoms. This could mean that most, if not all, people with the aquaporin-4 antibody in their blood will at some point come down with NMO, said Richard Ransohoff, M.D., a neurologist at the Cleveland Clinic in Ohio and an MSDF Scientific Advisory Board member, in an interview with MSDF. But sometimes, years go by before patients with the antibody develop symptoms, probably because the antibody first needs to cross the blood-brain barrier (BBB) to enter the CNS and do damage. (Still, to really be sure that having the antibody is sufficient to eventually come down with the disease, one would have to follow thousands of healthy people with the antibody but without any symptoms for years and see if they develop NMO, Scott Zamvil, M.D., Ph.D., a clinical neurologist and immunologist at UCSF, told MSDF.)

One hint that an open BBB is important comes from the observation that the brain’s “vomit center,” or area postrema, which is often the first area affected in NMO patients who show intractable nausea and vomiting, has a leaky BBB to begin with.

It’s less clear what opens the BBB in the other affected areas, the optic nerve and spinal cord. But animal studies suggest that similar to the situation in MS patients, T cells that target CNS proteins might be involved in opening the BBB in NMO: In 2009, two groups, one led by Hans Lassmann, M.D., a neuroimmunologist at the Medical University of Vienna, the other led by Jeffrey Bennett, M.D., Ph.D., a neurologist at the University of Colorado School of Medicine in Aurora, reported that intravenous injection of human aquaporin-4 antibody could induce NMO-like lesions in the CNS of rats, but only if the animals already had CD4+ T-cell induced brain inflammation that opened the BBB (Bennett et al., 2009; Bradl et al., 2009).

The researchers first induced brain inflammation in the rats with T cells that recognize myelin basic protein (MBP), an abundant CNS protein, which entered the brain through the BBB. Once the cells encountered MBP inside the brain, they released cytokines, Lassmann told MSDF. The effects of these cell-signaling molecules eventually led to further opening of the BBB, allowing the intravenously injected human aquaporin-4 antibody to enter and cause NMO-like brain lesions.

This experiment illustrates why there still is no animal model for NMO with high aquaporin-4 antibody titers in the blood that are maintained for a long time, Lassmann said. To create such a model, one would have to immunize animals with aquaporin-4 protein so they make their own aquaporin-4 antibodies. But attempts to do so have been unsuccessful. Instead, researchers inject human aquaporin-4 antibodies into the animals to mimic NMO. After a few days, however, such animals develop an immune response to the human antibodies, which is why researchers can only do short-term experiments in these animals. That’s part of the reason why it’s still unclear how NMO lesions really form, Lassmann said. “Many key points are still open, because we don’t have more chronic experimental models,” he told MSDF.

Still, it seems clear that it takes two things for NMO lesions to form: something that opens the BBB, such as a CNS-specific CD4+ T-cell response, and entry of the aquaporin-4 antibody into the CNS. This dual-hit model explains why patients with the antibody often don’t come down with NMO for years: That only happens once something opens the BBB. “Apparently, the antibodies alone don’t do the job, they need some sort of second hit, and we think it’s the T cells,” Lassmann said.

This isn’t just true for the rats but also seems to happen in human NMO patients: Recently, Zamvil and his colleagues found aquaporin 4-specific CD4+ T cells in NMO patients. The study also suggested what might elicit such CNS-specific CD4+ T cells: Some of the aquaporin 4-specific T cells targeted a peptide in aquaporin 4 that resembles a peptide in a protein from Clostridium perfringens, a gut bacterium that causes infections (Varrin-Doyer et al., 2012). This suggests that infections might elicit the kind of CNS-specific T cells that open the BBB, so that the aquaporin-4 antibody can enter the brain and cause NMO symptoms. Infections that can induce such a CNS-specific T cell response might in fact be quite common, Lassmann speculates, because it appears that most, if not all, people who carry the aquaporin-4 antibody in their blood eventually develop NMO symptoms, and because common pathogens such as the flu virus carry antigens that resemble CNS antigens.

Once the aquaporin-4 antibody enters the CNS, it binds to its target, the water channels on the astrocytes. Some studies suggest that this gets a part of the immune system involved called the complement system, a group of proteins that get activated once they bind to antibody-coated cells. This eventually leads to the formation of a membrane attack complex that punches holes in the antibody-coated cells (in this case the astrocytes). As a result, the astrocytes die.

The evidence for this model comes from a study in which scientists injected serum from NMO patients into the brains of mice and found NMO-like lesions only if they also injected human complement (Saadoun et al., 2010). “The antibodies alone didn’t seem to do anything at all, which was rather disappointing,” said Angela Vincent, MBBS, a neuroimmunologist at the University of Oxford, U.K. , who participated in the study. “But when we added human complement, which is more active than mouse [complement], we got lesions.”

The binding of the aquaporin-4 antibody also induces antibody-dependent cellular cytotoxicity (ADCC), which attracts immune cells that further damage the tissue, Alan Verkman, M.D., Ph.D., a clinician-scientist at the University of California, San Francisco, who was also involved in the study, told MSDF.

But NMO-related symptoms such as nausea can be reversible, and autopsy studies have revealed that astrocytes in the brain’s “vomit center” survive, even though the aquaporin-4 protein has disappeared. This suggests, Sean Pittock, M.D., an autoimmune neurologist at the Mayo Clinic in Rochester, Minnesota, told MSDF, that in some cases, the binding of the aquaporin-4 antibody doesn’t kill the astrocytes but somehow causes the water-channel protein to disappear from their surface.

Indeed, Lennon and her colleagues found in cultured cells that antibody binding can transiently block the water channel or cause it to be taken up by the astrocytes. The result is swelling, because the astrocytes lose their ability to remove excess water from the brain. They also found that antibody binding can lead to internalization of the glutamate transporter, which is also expressed on the astrocytes. As a result, the astrocytes can’t remove glutamate from the extracellular space anymore, and the excess glutamate damages oligodendrocytes and nerve cells. These results came from cultured cells, but Mayo researcher Claudia Lucchinetti, M.D., also found evidence for these effects of antibody binding in tissue from NMO patients.

But Verkman said he was unable to confirm these observations, and that the main effects of antibody binding are complement activation and ADCC, and the glutamate transporter disappears not because it is internalized, but because the astrocytes are dying.

For now, it remains to be seen who is right, said Lawrence Steinman, M.D., a neurologist and immunologist at Stanford University, in an interview with MSDF. “Either they are not doing the same experiment, or somebody is right and somebody is wrong, or a combination of both,” he said. “It will get resolved over time by more people working on the subject.” And knowing the effects of antibody binding is not just of academic importance: It could shed light on possible side effects of aquaporumab, a drug currently in development that is based on a modified aquaporin 4 binding antibody.

Return to Part 1: The Other Disease