Reversing a decision made in 2013, the FDA approved Lemtrada (Genzyme/Sanofi) in a restricted program for relapsing forms of MS 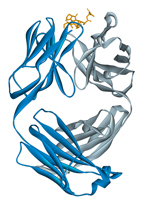 Late Fridays are often reserved for releasing bad news, but at 9 pm ET on November 14, Genzyme announced U.S. Food and Drug Administration (FDA) approval of its drug alemtuzumab as a third-line therapy for relapsing forms of MS. The decision reverses the agency’s rejection of the drug nearly 1 year ago, apparently over concerns with study design and side effects.

Despite the approval, the safety of the drug appears to remain a concern. The Lemtrada label provided by the company carries a boxed warning for autoimmunity, infusion reactions, and malignancies. The drug will be available only through a restricted distribution program from trained certified prescribers and enrolled healthcare facilities that can manage infusion reactions. A regimen of other drugs given with the therapy is designed to prevent some serious side effects, and patients will be monitored for at least 4 years after their last treatment.

“I suspect that a lot of MSers in the US will be envious of the European label that allows first-line usage that maximises the benefits of alemtuzumab therapy,” wrote Gavin Giovannoni, MBBCh, Ph.D., FRCP, of Barts and The London School of Medicine and Dentistry, in his MS Research blog. “Once you have failed one, two or three other DMTs you will have accumulated a lot of damage, which may limit alemtuzumab's effectiveness. Alemtuzumab is one of the most effective MS therapies we have and the only induction therapy on the table.” Giovannoni is a well-known advocate of aggressive and early treatment of MS.

Other MS drugs are taken in pills or by injections daily or several times a week. Alemtuzumab is given by intravenous infusion over about 4 hours for two treatment courses. The first is five consecutive days. One year later, the second course is given over three consecutive days.

“This is a very significant event for us,” Bill Sibold, senior vice president and head of the MS business at Genzyme, told the Boston Globe. Genzyme won FDA approval for its first MS therapy, teriflunomide (Aubagio), in 2012. “About 60 percent of the global market for multiple sclerosis is in the US. We talk about our aspirations to be leaders in MS. Up until this point, we’ve had Aubagio, which we’re very proud of. But this will give us both products for our US franchise.”

Alemtuzumab will be priced at $158,000 for two courses of treatment over two years, the Globe reported. In the studies, patients on the drug suffered half as many relapses as those taking a competing drug, interferon β-1a (Rebif, EMD Serono), which costs $134,600 for a similar treatment regimen, or 17% less.

Regulators in Europe, Canada, Australia, and other countries gave the antibody the green light late in 2013. The U.K. National Institute of Health and Care Excellence Committee concluded that alemtuzumab could be considered a cost-effective treatment for highly active RRMS despite interferon treatment or with rapidly evolving severe RRMS (Diaz et al., 2014).

“The price point is always shocking,” Laura Kolaczkowski wrote in the comments section of the MS Research blog, “but a strong argument can be made that $158,000 and the other associated costs with administering and monitoring over several years, is easy to justify compared to a lifetime of the other drugs. Current therapies are running around $60,000/year, and if you live 20 years with MS and remain on therapy, [that’s] $1,200,000 at today's cost. Then you factor in the cost of people no longer being able to work, the support services and other costs of living with MS in the US and suddenly Lemtrada appears to be a bargain.” Kolaczkowski is a person with MS and a patient-advocate blogger.

The way alemtuzumab works is not completely understood (Hartung et al., 2014). It selectively targets a receptor on T and B cells and monocytes. The cells are destroyed by several mechanisms, with the lowest level of cells occurring about a month after treatment according to two phase 3 studies (Cohen et al., 2012; Coles et al., 2012). The function of the receptor, CD52, remains unknown. The B cells return first, and the repopulating T cells have more regulatory T cells, which dampen the impact of pathogenic autoreactive T cells.

In addition to the questions of safety and efficacy lingering from the phase 3 studies, the treatment decision may be further complicated by the inability to select patients who need more aggressive treatment to prevent progression of disability. “As long as these criteria and evidence supporting long-term advantages of early intensive interventions are missing, many physicians might be reluctant to use this treatment in early multiple sclerosis,” according to a commentary accompanying the trial results (Sprenger and Kappos, 2012).

“The FDA approval of Lemtrada is a significant milestone for people living with relapsing MS in the United States,” said Timothy Coetzee, Ph.D., chief advocacy, services and research officer at the National MS Society, in a news release. “We are pleased that the voices of the MS community have been recognized and that people with relapsing MS will now have access to a new, needed treatment option.”

Gavin Giovannoni, MBBCH, Ph.D., FRCP, is a member of MSDF’s Scientific Advisory Board.