Atacicept, which targets B cells, increased rather than decreased exacerbations in relapsing MS

Results from a phase 2 trial of the recombinant fusion protein atacicept raise significant questions about its potential use in managing relapsing multiple sclerosis (MS). 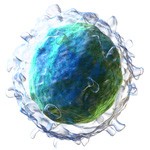 As MSDF has reported,  it’s known that depletion of B lymphocytes is associated with decreased inflammatory activity in MS. In addition, previous studies with the monoclonal antibodies rituximab (Hauser et al., 2008) and ocrelizumab (Kappos et al., 2011), both of which target the CD20 receptors, have shown those agents to be robust in their therapeutic effect on MRI lesion activity and relapses.

Studies focusing on atacicept have shown that it suppresses the production of autoreactive antibodies and inhibits the development of more mature spleen B cells by blocking the evolution of immature B cells from stage T1 to stage T2. Atacicept has also been shown to inhibit disease progression in mouse models of rheumatoid arthritis and systemic lupus erythematosus.

Hopes for atacicept appear to have been quashed by a study appearing in the current issue of The Lancet Neurology by Ludwig Kappos, M.D., of University Hospital in Basel, Switzerland, along with colleagues, which aimed to evaluate the safety and efficacy of atacicept in treating relapsing MS (Kappos et al., 2014).

The investigators designed a randomized, double-blind, placebo-controlled trial to gauge the short-term safety and tolerability of atacicept. The trial was also aimed at assessing the protein's capability to decrease CNS inflammation, as determined by frequent MRI assessments.

The investigators said the results were unexpected.

Of note, however, MRI findings did not appear to reflect those differences in relapse rates: Mean numbers of gadolinium-enhancing T1 lesions per scan were similar in all the groups, the researchers reported.

Based on those disappointing findings, the researchers terminated the initial phase of the study. They followed up, however, by revising the study parameters to include a 60-week safety follow-up period. During that time, annualized relapse rates did not differ significantly among the groups, the researchers said. Also, temporary increases in disease activity did not translate into differences in time to disability progression or to the number of patients who had progressed by the end of the safety follow-up phase of the study, the researchers said.

They concluded, "Increased clinical disease activity associated with atacicept suggests that the role of B cells and humoral immunity in multiple sclerosis is complex." They stressed that future studies of immune response in MS need to include rigorous monitoring for negative effects.

In comments accompanying the ATAMS study (Lühder and Gold, 2014), Fred Lühder, Ph.D., of the University of Göttingen Medical School in Göttingen, Germany, and Ralf Gold, M.D., of Ruhr-University Bochum in Bochum, Germany, asked, "What happened in the ATAMS study, and what could account for the differences between atacicept and the anti-CD20 drugs that showed benefits in previous trials?"

"Finally," the commentators noted, "pathogenic T-cell responses are diminished and regulatory T cells are expanded in response to rituximab, which could be the result of B-cell depletion or of an unidentified mechanism; this effect could very well aid the therapeutic efficacy of anti-CD20 monoclonal antibodies, but be absent in the case of atacicept."

The reasons why the trial with atacicept failed while other therapies targeting B cells have been successful are not altogether clear but may have to do with these agents targeting different receptors on the cell surface.

Atacicept is a fusion protein that binds two cytokines important for B cell maturation and survival. The other B cell agents (e.g., ocrelizumab, ofatumumab) target CD20 on the cell surface and reduce the numbers of mature B cells but spare plasma cells and immature B cells. They are significantly different in the mechanism of action, which could explain the differences in outcomes. There are also many other variables that could explain the outcomes that are hard to identify without really studying the trial design for each study.

Regardless, the failure of atacicept in phase 2 illustrates the importance of performing large phase 3 clinical studies before approving treatments for use in human disease and before making treatment recommendations.