Researchers have found evidence of demyelination and axonal loss in olfactory tissue. Could the olfactory system be an important link between environmental exposures and MS?

Whether it’s an aromatic meal, fragrant flowers, or a gas leak—some people with multiple sclerosis (MS) have an impaired sense of smell. Previous research placed the blame squarely on the brain, specifically on lesions in the sensory processing areas. In a fresh twist, the corporal culpability now reaches to the nose, according to a new study that documents demyelination and axonal loss in olfactory tissue in people with MS and other demyelinating diseases.

“This is a whole new thing,” said Richard Doty, Ph.D., director of the Smell and Taste Center at the University of Pennsylvania Medical Center in Philadelphia, who was not involved in the study. “MS is one of the few disorders where there is a nice correlate between physical changes in brain and sensory measures. [The olfactory tissue] may be a more sensitive marker of what is going on elsewhere.”

Interestingly, the team observed myelin loss accompanied by axonal loss and signs of inflammation in the olfactory tissue in half to three-quarters of the cases. The changes were most extensive in MS. They also examined other brain regions from the same cases. Cases with more demyelination in the olfactory bulb and tract tended to have more myelin loss in nearby layers of the frontal olfactory cortex, but not in the more distant hippocampus, where there was little evidence of damage, the team reported (Joseph et al., 2014).

In contrast, in the cases of herpes simplex encephalitis, Alzheimer's disease, and non-neurologic controls, they observed no demyelination.

The findings contradict a long-standing dogma that the olfactory tract and bulb are spared in MS, said Albert Joseph, a medical student at Oxford University in the U.K., who won an award for his May 30 presentation of the work at the joint meeting in Dallas, Texas, of the Consortium of Multiple Sclerosis Centers (CMSC) and the Americas Committee for Treatment and Research in Multiple Sclerosis (ACTRIMS).

After his talk, Joseph and his mentor, neurologist Gabriele De Luca, M.D., Ph.D., a clinician-scientist at Oxford, sat down with MSDF to tell the story behind their findings and to speculate about what they mean.

“What is really striking is that the inflammatory changes happened within days of symptom onset,” De Luca said. The seven people in the ADEM cohort died an average of 7 days after falling ill, with most cases showing considerable inflammation and three of their brains already showing demyelination in their olfactory bulbs and tracts. One young woman with MS, known to have one of the most severe inflammatory diseases of all the MS cases in the Oxford Brain Bank, died in March after being diagnosed the previous December. That tissue showed significant demyelination of the olfactory bulb and tract.

“Even though the disease duration was only four months, the areas of demyelination in the olfactory structure were ‘chronic’ (meaning with little inflammation), suggesting that demyelination happened much earlier and resolved,” De Luca wrote in a follow-up email. “That may have implications in disease pathogenesis.”

The olfactory damage could be a bystander effect of demyelinating diseases in the central nervous system, De Luca acknowledged. Or, in the hypothesis they are pursuing, the olfactory tissue could serve as an avenue through which environmental exposures, such as pathogens or smoking, exacerbate or even trigger inflammatory processes that lead to MS. 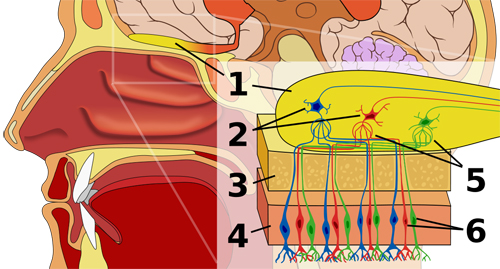 Anatomically, the olfactory bulb and tract are sandwiched between the bony roof of the nasal cavity and the brain. Nerve fibers dangle down from the bulb to pick up rising scents. From the bulb, odor signals breeze along the olfactory tract into the olfactory cortex and further into the brain. Some viruses and other substances can hitch a ride into the brain on this sensory highway. “MS is such an enigmatic disease,” De Luca said. “It’s a hypothesis worthy of study.”

Smell loss can be an early sign of neurodegenerative diseases, such as Alzheimer’s disease and Parkinson’s disease. “It’s sensitive, but it’s not specific,” Doty said. In most people, he said, olfactory dysfunction does not indicate brain disease, although it can help distinguish idiopathic Parkinson’s disease from progressive supranuclear palsy. Olfactory function decreases with age and affects more than half of people between 65 and 80 and three-quarters of people older than 80.

Doty has found a related taste deficit in people with MS. At the recent meeting of the American Academy of Neurology, Doty presented preliminary evidence that taste was altered for four qualities (sweet, sour, bitter, and salty) in 72 people with MS (mostly relapsing-remitting), and that the extent correlated with plaque activity in the temporal lobe, as determined by MRI brain images (Doty et al., 2014). As with smell, people did not notice their sensory deficits unless they were extreme, he said.

De Luca’s area of expertise is the spinal cord, and his main line of research explores the connections between genes and pathology in MS. The study started with a scientist’s version of Internet surfing. On an unrelated search of PubMed, De Luca encountered a random article about the loss of smell in people with MS. Intrigued, he followed the tangent to a study in the New England Journal of Medicine (Doty et al., 1997) that correlated plaques detected by MRI in olfactory regions of the brain with low scores on an odor-identification test in men and women with MS.

De Luca wondered whether the actual olfactory bulb and tract were also affected. His longtime collaborator and mentor, Oxford neuropathologist Margaret Esiri, DM, thought not. Digging deeper into the literature, De Luca found a fleeting one-sentence reference to olfactory demyelination in a century-old neurology text (Gowers, 1886). Yet, in a later study that seemed to lay the matter to rest for more than 60 years, researchers found no demyelination in the postmortem olfactory bulbs and tracts of eight people with MS (Zimmerman et al., 1950). Meanwhile, several studies had documented the loss of smell in people with MS, and they attributed this to demyelination in the olfactory brain.

Still curious, De Luca pulled a couple of MS olfactory tissue slices from the brain bank and looked under the microscope. He happened to pull two samples with extensively demyelinated olfactory bulbs and tracts. “I was shocked, and [Esiri] was struck” by the findings, he said.

The project got going after Joseph asked De Luca about an opportunity to get involved in neurology research. They designed their study to include pathologically confirmed cases of MS and two other demyelinating diseases, tissue from diseases that were prominently inflammatory or neurodegenerative, and control samples with no known neurological conditions.

For Joseph, it was no simple matter to evaluate the demyelination patterns of the olfactory nerve tissue. The small structure has a complex topography, with a mix of gray and white matter. It took a long time for him to learn what normal looked like.

After developing expertise in discerning “normal” from “abnormal,” Joseph and De Luca eventually found frequent olfactory demyelination in the demyelinating diseases: 12 of 17 MS cases (71%), three of seven ADEM cases (43%), and two of three NMO cases (67%). Many of those samples also showed evidence of inflammation and neurodegeneration. Demyelination was extensive in some of the MS cases. The three cases of herpes simplex encephalitis showed significant inflammation with no demyelination. The four cases of Alzheimer's disease and the eight non-neurologic controls showed no evidence of demyelination.

The demyelination in the olfactory bulb and tract were mirrored in nearby cortex layers but not deeper in the brain, suggesting to Joseph that “perhaps the close proximity of the olfactory bulb/tract and the subjacent cortex provided an important clue, not only about the possible substrate for loss of smell in MS, but also about disease pathogenesis,” he wrote in an email.

The idea that neurological pathology starts in the nose and ends up in the nervous system is not new. At one time, Canadian doctors tried cauterizing the nose to block the spread of poliovirus, Joseph said. And “there was a period at the beginning of the 20th century where surgeons would scrape out the sinuses as a treatment for optic neuritis,” he added.

A more current olfactory vector hypothesis for several neurological diseases, such as Alzheimer’s and Parkinson’s, posits that the pathology starts in the nose and lands in the brain. Virus and tiny particles can interact with the olfactory receptors dangling in the nasal cavity, initiate inflammation, and enter the brain (Doty, 2008).

Joseph, De Luca, and Esiri have teamed up with clinical colleagues to explore clinical correlates of their pathology findings. They also want to understand the interplay between inflammation and different structures of the central nervous system.

“As a medical student, this has changed how I view medicine,” Joseph said. “Everyone knows in theory that one should question what’s gone before. Seeing the positive results in real life has been an amazing experience.”

De Luca is supported by the AANF/CMSC John F. Kurtzke Clinician-Scientist Development Award and a Goodger Scholarship (University of Oxford). De Luca and Esiri receive support from the NIHR Biomedical Research Centre, Oxford. Another co-author is supported by a Medical Research Council PhD Studentship. Doty has research funding from the U.S. National Institutes of Health and the Department of Defense. He is a major shareholder in Sensonics Inc., a manufacturer of tests of taste and smell.