Detection of interleukin-1β (IL-1β) in cerebrospinal fluid (CSF) during periods of remission appears to be a potentially negative prognostic factor in patients with relapsing-remitting multiple sclerosis (RRMS), according to findings from a new study. 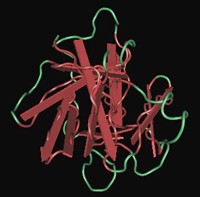 Writing in the February 18 Journal of Neuroimmunology, Silvia Rossi, M.D., of the Multiple Sclerosis Clinical Centre, Tor Vergata Hospital, Rome, Italy, and colleagues noted that until recent years the absence of clinical and radiologic activity in RRMS had been considered evidence of remission (Rossi et al., 2014). However, with new diagnostic technologies—unconventional MRI along with others—it is now apparent that disease processes may be active even in asymptomatic patients.

Pathological studies have demonstrated that synapse, neuronal, and glial losses may occur in the absence of demyelination. In addition, even during relapses of MS, levels of IL-1β in CSF may be sufficiently high to trigger excitatory transmission and excitotoxic damage in neurons, the researchers wrote.

In an effort to find out more, these investigators measured CSF concentrations of IL-1β in 170 newly diagnosed RRMS patients during periods of remission, as assessed by standard clinical and radiological criteria. Upon diagnosis all patients had begun various disease-modifying therapies.

Using MRI, optical coherence tomography, and clinical assessment, the researchers followed the patients for a mean of 5 years.

They reported that although IL-1β levels in CSF measured during remission were correlated neither with earlier relapses nor with formation of new lesions, they were associated with higher progression indexes (PI) and Multiple Sclerosis Severity Scale (MSSS) scores at follow-up visits.

In addition, the researchers said, compared with patients who had undetectable levels of IL-1β (threshold of 0.56 pg/mL) during remission, those whose IL-1β levels were detectable had poorer sustained Expanded Disability Status Scale or Multiple Sclerosis Functional Composite scores at follow-up visits.

Patients with undetectable IL-1β had significantly lower PI and MSSS scores than did patients with detectable levels. They also were more likely to have benign MS phenotypes, the researchers reported.

Yet more evidence that IL-1β levels during remission make a difference: Patients whose levels were undetectable showed less ocular damage than that in patients with detectable levels.

"Our results suggest that persistence of a proinflammatory environment in RMSS patients during clinical and radiological remission influence midterm disease progression," the researchers conclude.

The present investigation was funded by a grant from Fondazione Italiana Sclerosi Multipla and by a grant from Ministero della Salute to DC. Some of the authors disclosed competing interests involving a variety of commercial entities including Almirall, Bayer Schering, Biogen Idec, Merck Serono, Novartis, Roche, Sanofi-Aventis, and Teva

There is a certain part of the MS fraternity, particularly the EAE-centric ones, who believe T cells do everything, so they find it hard to contemplate that anything else is important. However, evidence is growing that a bigger worldview of MS is needed.

Just look at MS pathology and you will see low-grade glial inflammation. And even in EAE, if you wait long enough, when the effects of T-cell immunosuppression have passed, you can see chronic glial activation. Rossi et al. suggest that this phenomenon is ongoing despite the fact that MRI may not see it, so present imaging modalities may need to be improved.

It is feasible that PCR could be helpful. For PCR one would need RNA. But the first question I would want answered is what is the source of the IL-1β? Is it from within the CSF or the CNS?

If it is coming from the CNS, then PCR is a waste of time because you are not going to get biopsies. Based on previous publications, it has been suggested that the CSF is coming from the CNS, and based on histology then one source of IL-1β is the microglia. This would fit with the concept that the central action of the activated innate immune system is a major driver of progression and would also be consistent with the view that targeting the peripheral adaptive immune response, which is the mechanism of action of current DMTs, would be ineffective at controlling progression. This study suggests that IL-1β in the CNS does not correlate with relapsing activity, although in past studies it has been suggested that concentrations of IL-1β are higher in CSF during active rather than inactive MS.

Would lowering the detection threshold of the immunoassay used in this study help to better identify patients who are progression-free?

The question is what is a background level of IL-1β and what is a threshold for detecting inflammation, because it is not clear what the sensitivity and specificity of the assay is. It is clear that there is overlap between progressors and nonprogressors. However, without seeing the data, e.g., a scatter diagram, it is difficult to know.

All too often in clinical research, a biomarker or an imaging technique is said to correlate with a biological activity, and only later is it discovered that the correlation is modest and the diagnostic/prognostic value therefore questionable.

I would say that more aggressive therapy for IL-1β-detectable patients would be the logical extension of this work, if it holds up in further study. However, if you get more aggressive immune therapies, then the risk from infections increases. Targeting the innate immune response doubles the problem of simply targeting the adaptive immune arm. As the innate immune physiologic response is needed for life, how would such therapies be targeted to the CNS?

For me, this work helps bring focus on the importance of adding therapies that treat different parts of the MS mechanism. But what are most needed in the clinical toolbox are the actual tools to do something about it.

This is a thought-provoking observation from a well-regarded research group describing a positive association between cerebrospinal fluid levels of the pro-inflammatory cytokine IL-1β measured during recovery from an MS attack. Additional studies will be required before a definitive conclusion can be made, but it is an interesting study and a good starting point for future research.

There is a growing appreciation that there are processes affecting normal-appearing tissue in the MS nervous system during clinically quiescent stages of MS. Whether this is "silent" inflammation, neurodegeneration, or both remains an important unanswered question. However, the ability to predict which individuals with MS will develop a progressive course of disease will be critically important and will certainly guide treatment decisions in the future.

But even now, before those sorts of questions are answered, might the findings change the way clinicians and researchers think about the disease mechanism of MS?

I think the results from this study need to be validated by other research groups in larger and more diverse populations of patients before any changes to how researchers think about disease mechanisms will occur. However, evidence is growing that "normal" looking tissue may not be normal and that there are ongoing processes (inflammatory and/or neurodegenerative) occurring during clinically "silent" episodes of MS.

There will likely be a lot of variables for predicting long-term prognosis. Some of these may be soluble mediators that can be measured in the CSF or blood; others may be based on MRI imaging, genetics, and/or clinical history. It remains to be confirmed what the best prognostic tools are, but it is an extremely important area of investigation.

I think when looking at the study results, you have to remember that the authors have preliminary evidence for an association between IL-1β levels in the CSF and disability progression. However, this approach will not be able to determine causation (that IL-1β is actually causing increased disability). It remains to be determined whether this observation applies to a larger and broader population, and it would also be interesting to follow patients longer to see if the IL-1β– population ultimately catches up with the IL-1β+ population.

In summary, it is obvious that the ability to predict the prognosis for MS is a critically important area of investigation that will eventually yield important new insights into the mechanisms driving progression and new treatment strategies that will improve the lives of people living with MS. This continues to be a high priority for the research community and for the National MS Society.