Unlike relapsing-remitting MS (RRMS), PMS affords its victims no breaks, no cooling-off periods in which to recover from the disease’s ravages. Treatments seldom work against PMS, and research has been stymied by the lack of animal models.

Cristofanilli and his colleagues at the Tisch MS Research Center in New York collected cerebrospinal fluid (CSF) from human patients with untreated primary or secondary PMS, RRMS, or from control subjects with neurodegenerative diseases other than MS. After removing cells and debris from the CSF samples, they injected wild-type mice twice per week for up to 4 weeks with the CSF supernatant via a cannula implanted directly into the third ventricle. Later, the researchers perfused the mice and examined their tissues for signs of gross pathology using immunohistochemistry. 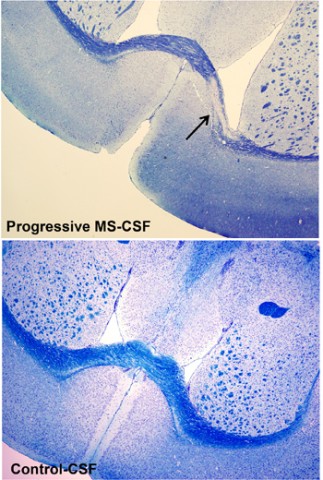 After 4 weeks, none of the mice displayed a disease phenotype as measured by rotarod motor tests, in which mice attempt to stay on a rotating rod suspended a short distance above the cage floor. The investigators did not find this surprising considering the resilience of wild-type mice. But what did surprise the team, Cristofanilli said, were the lesions they found in the brains of about 70% of the mice injected with PMS CSF. In contrast, only 14% of the mice injected with RRMS-CSF and none injected with control CSF developed lesions. The team plans to continue looking for signs of disease phenotype at later time points.

Demyelinated lesions appeared after 2 weeks of injections, when T cells were also detectable. After 4 weeks, axons were lost at the lesion sites, B cells and plasma cells had infiltrated, and astrogliosis was rampant. Based on the timing of the immune cells’ appearances during lesion development, the researchers believe that demyelination begins before the massive infiltration of peripheral immune cells. “We think T cells are more involved in demyelination, and then B- and plasma cells may contribute more to neurodegeneration,” Cristofanilli told MSDF.

In a subset of the mice, the investigators examined changes in gene expression using ELISA and microarrays. “Genes related to immune cells were the most interesting—they had the highest variation,” Cristofanilli told MSDF. Focusing on genes related to the Th17 pathway, known to play a role in MS pathophysiology, “we found a strong upregulation of Th17-cell activity in the central nervous system of PMS-CSF-injected mice compared to controls,” Cristofanilli said in his presentation of the findings.

In order to see whether a disease-modifying treatment would alter the pathogenicity of PMS CSF, the researchers next took CSF from four rare patients who became clinically stable following therapy with intrathecal methotrexate or natalizumab. Compared to mice injected with PMS CSF from the same patients before they received the drugs, “patient treatment drastically reduced the number of mice that developed lesions” following injection, Cristofanilli said, suggesting that the therapy had reduced the pathogenic agent in patients’ CSF.

“We think we are now in a position to study PMS in mice, and we are focusing on elucidating the nature of the agents responsible for the lesion pathology,” Cristofanilli said in his presentation. When asked what the pathological agent in the patients’ CSF might be, he answered, “That’s the million-dollar question.”

No members of the research team made any disclosures. The research was supported by the Tisch Center’s private funds as well as a grant from the Emerald Foundation.