159 Genetic Variants Now Known to Be Associated With MS

The International MS Genetics consortium recently identified more than 45 new genetic variants associated with susceptibility to multiple sclerosis, many of which are involved in brain function

The list of genetic variants associated with multiple sclerosis grew even longer earlier this year at the joint ACTRIMS-ECTRIMS conference in Boston. According to a presentation by Philip De Jager, M.D., of Brigham and Women’s Hospital, Harvard Medical School, and the International MS Genetics Consortium, there are now more than 159 such genetic variants. Previous genome-wide association studies (GWAS) published in 2013 identified a total of around 110 variants.

The study that De Jager presented consisted of three parts: First, the team performed a meta-analysis of existing MS GWAS. Taken together, the data spanned over 14,000 individuals with MS. In an interview with MSDF, De Jager mentioned that no one had ever undertaken a meta-analysis of this scale in the field of multiple sclerosis genetics before. 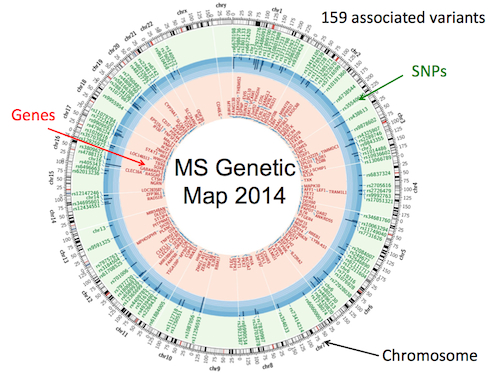 From the meta-analysis, the team isolated new genetic variants and then performed a replication study in over 20,000 individuals with MS. This interim analysis confirmed 48 new variants, although De Jager said that the group will likely report more variants in the final version of the study that they plan to publish later this fall.

In the third phase of the study, the team set to work to expand upon how those variations contribute to susceptibility to MS. Previous GWAS found that “the majority of the MS genes seemed to be related to immune function and expressed in immune cells,” De Jager said. Perhaps most interestingly, several of the variants found in this latest study may be associated with changes in brain function.

The group obtained tissue samples from the frontal lobes of older, postmortem subjects without MS to examine these genetic variants. “[This is] exciting because there are at least some disease effects that may be related to alteration of gene expression inside the brain,” De Jager said. He added a note of caution that their study couldn’t specify which genes came from which cell types, though, so implications of their conclusions are limited at this time. “Some of these changes may be driven by changes in the brain’s immune cells like changes in the microglia.”

De Jager also noted that he was surprised by the multiplicity of risk variants found in many regions associated with MS. In many cases, regions of the human genome involved in the onset of MS harbor multiple different variants that influence MS risk. Each of these variations can affect the level of susceptibility an individual has to MS. Thus, De Jager said, it’s important to identify and understand each of them when developing predictive tools for MS and investigating the functional consequences of each region.

With the current study, De Jager said that they have now explained a little less than half of the heritability of MS. “So there is still more work to be done,” he said. In the future, he and the International MS Genetics Consortium hope to identify more genetic variations affecting susceptibility to MS and to tease apart how each of them contributes to the onset of the disease.

This research received financial support from the NIH: NIA, NINDS; NMSS; Thome Foundation, Biogen Idec, Genzyme/Sanofi Aventis, and Vertex. De Jager also consults for Genzyme/Sanofi Aventis, Teva, and Vertex, receives speaker fees from Biogen Idec and Pfizer Inc., and is a member of the Scientific Advisory Board of the Accelerated Cure Project, the nonprofit publisher of MSDF.

As usual, the International MS Genetics Consortium has achieved great things! It's good Dr. Patsopoulos and Dr. De Jager and all the consortium are very cautious about adding to the library of established MS genomic loci. Most of the loci had previously shown some significance but needed more evidence to establish them as definite loci. In the pre-GWAS era, many candidate studies suggested spurious associations that have never been confirmed by GWAS. In a few examples, it took a lot of effort to correct the misinformation due to these false positive associations.