The Inpp4b gene plays a role in motor evoked potentials in a mouse model of MS, according to new research. The polymorphism is also associated with MS in Spanish and German populations.

When measured early in the onset of MS, MEPs are useful for predicting disability, according to the authors. They can also be useful in diagnosing MS. However, just because a patient has a higher latency for evoked MEPs doesn’t mean that he or she will develop MS.

The research group used a variety of computational and transgenic techniques to isolate the Inpp4b gene in EAE mice. Specifically, mice with the SJL/J allele had a slower latency in MEPs than wild-type mice. The authors suggested that this allelic variation may cause a change in the structure of myelin or a modification in signaling pathways, leading to a change in the conductance of MEPs. The allele did not seem to have any effect on demyelination, the authors said. 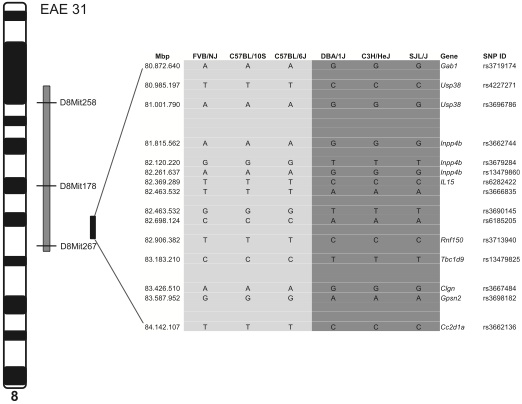 The team followed up their mouse studies with association studies in Spanish and German populations of MS patients and healthy controls. In the Spanish population, the single-nucleotide polymorphism (SNP) rs13102150 was strongly associated with MS, although the association was weaker in the German population, failing to reach statistical significance. Combined, the association of the SNP rs13102150 with MS in both the German and Spanish populations was significant at p = 0.022 (pooled odds ratio = 0.88; CI, 0.78-0.98).

The study was published in The American Journal of Pathology along with a commentary by researcher Hans Lassmann, M.D., of the Center for Brain Research at the Medical University of Vienna (Lassmann, 2014).

“This study represents an interesting example on how minor changes in conduction velocity, which do not result in a clinical phenotype in control populations, may aggravate disease in conditions such as EAE or MS,” Lassmann wrote. “Even a minor deficit in conduction velocity may lead to an increased clinical phenotype, when the patients are on the verge of exhausting their functional reserve capacity.”

It remains unclear precisely how Inpp4b modulates nerve conduction velocity. However, Lemcke and her team pointed out that Inpp4b is a homolog of Inpp4a. “Targeted disruption of Inpp4a in mice leads to neurodegeneration in the striatum” as well as in the cerebellum, the authors wrote.

According to Lemcke et al., researchers do know that Inpp4b is involved in the phosphoinositide 3-kinase signaling pathway and can play a role in cell differentiation, apoptosis, and cellular migration. Inpp4b may also play a role in modulating membrane signaling through traffic within the cell.

The identification of a polymorphism on a gene regulating conduction velocity in a German and Spanish cohort is a very interesting finding that may contribute to shedding some light on the pathogenesis of the disease. The initial focus on genetic associations on immune genes led to focused studies on mechanisms of immune activation and the consequent development of multiple immunomodulatory strategies. This paper suggests that other mechanisms of genetic predisposition may be in place and affect the neurons themselves by modulating conduction velocity, which defines the ability to rapidly transfer information between neurons. The implication is that we may start considering intrinsic changes in neurons or oligodendrocytes, which occur independently of any immune attack, as an important component of the disease process.