Comorbidities, Both Physical and Mental, Are Pervasive in MS

Individuals with MS have excessive rates of physical and mental health comorbidities, which can affect health-related quality of life

The link between multiple physical comorbidities and mental health comorbidities is strong among Scottish people with MS, according to findings from a cross-sectional analysis published in BMC Neurology.

Scotland has the highest prevalence of MS worldwide, making it a rich testing ground to identify comorbidities that work synergistically to reduce health-related quality of life in people with MS. Notably, previous research has shown that comorbidity often delays time to primary MS diagnosis by obscuring symptoms otherwise attributable to a new diagnosis. Additionally, it is associated with increased disability levels.

In a study geared toward identifying a range of clinician-recorded physical and mental health comorbidities in people with MS compared to controls (Simpson et al., 2014), Robert Simpson, M.D., of the University of Glasgow and colleagues used cross-sectional data from a nationally representative Scottish Primary Care data set (which holds clinical information on 1,751,841 individuals registered with 314 general practices across Scotland). The data, which have been culled from roughly a third of the Scottish population, are considered nationally representative in terms of age, gender, and socioeconomic status. For study purposes, investigators extracted data for 1,268,569 individuals. Due to low numbers of people with MS under age 25, the analysis was restricted to all people aged 25 years or older. 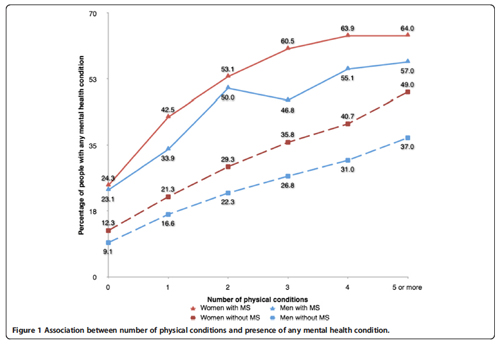 Findings from a final data set of 3,826 (0.3%, 95% CI 0.29-0.31), adjusted for age, sex, and socioeconomic status and compared with controls, demonstrate that people with MS had significantly higher levels of nervous system comorbidities, including chronic pain (OR 3.43); migraine (OR 2.38), and epilepsy (OR 2.20). Likewise, people with MS had significantly higher levels of gastrointestinal conditions such as constipation (OR 6.61).  In line with the original hypothesis, the researchers noted that mental health comorbidities were almost three times as common among people with MS compared with the general population, most notably depression (3.3 times higher prevalence) and anxiety (3.18 times higher prevalence).

The researchers wrote that these data strengthen existing evidence demonstrating the high rate of comorbidities among people with MS, adding that the findings are consistent with a “wider range of comorbidities than any previous comparable study in the field.”

Yet, while neurological and certain gastrointestinal conditions are considered to “stand out” in terms of prevalence, rates of cardiovascular conditions, which are high in Scotland, are “remarkably under-represented” and warrant more attention. For example, people with MS showed significantly lower rates of hypertension (OR 0.65), coronary disease (OR 0.64), heart failure (OR 0.62), and atrial fibrillation (OR 0.49), compared to the general population.

The high level of mental health comorbidities is also of interest since depression in people with MS has been associated with increased suicidal ideation and is a key predictor of quality of life, morbidity, and mortality.

The findings are limited by the inability to distinguish whether comorbidities were present before an MS diagnosis, and the researchers pointed out that the data were not designed specifically to study comorbidity in people with MS. The findings are also limited by the quality of data recording by clinicians. Regardless, they concluded that the consequences of the physical-mental health link on physical function and prognosis—especially in conditions like diabetes and heart disease—warrant greater vigilance among primary care clinicians. Clinicians should also be alert to the possibility of coexisting mental health conditions and actively treat them as warranted.

The authors declare that they have no competing interests. Study funded by the Chief Scientist Office of the Scottish Government Health Directorates (Applied Research Programme Grant ARPG/07/1). Data supplied by the Primary Care Clinical Informatics Unit at the University of Aberdeen.

What is most interesting in this article is the lower prevalence of physical disorders (like heart disease, kidney disease, and hypertension) in MS than in the general population. It raises the question as to whether MS exacerbates neuropsychiatric disorders but is protective against some serious medical conditions, especially the number one killer: heart disease. This may provide some important clues about prevention of cardiovascular disease.