In mouse models and in humans, females susceptible to multiple sclerosis (MS) produce higher levels of the blood vessel receptor protein sphingosine-1-phosphate receptor 2 (S1PR2) than do males, with greater expression in brain regions vulnerable to MS. Findings of this study, published May 8 in the Journal of Clinical Investigation (Cruz-Orengo et al., 2014), may help explain the nearly fourfold greater incidence of MS in women than in men.

“It was a ‘Bingo!’ moment—our genetic studies led us right to this receptor,” senior author Robyn Klein, M.D., Ph.D., associate professor of medicine, anatomy and neurobiology, and pathology and immunology at Washington University School of Medicine in St. Louis, Missouri, said in a news release. “When we looked at its function in mice, we found that it can determine whether immune cells cross blood vessels into the brain. These cells cause the inflammation that leads to MS.”

The mouse model used in this study was experimental autoimmune encephalomyelitis (EAE) induced by immunization in the SJL mouse strain. EAE has several of the features of MS in humans, including greater sensitivity of female SJL mice. Before this study, however, little evidence existed regarding the molecular mechanisms explaining differences in EAE susceptibility based on sex and strain.

Of 20 genes identified that were active at different levels in female brain regions vulnerable to EAE, 16 had unknown functions. Among the remaining genes, S1PR2 was a likely candidate because of previous research demonstrating its role in weakening the blood-brain barrier (BBB). Normally, the BBB protects the brain by keeping harmful molecules, such as those that cause inflammation, from passing from the bloodstream into brain tissue. The BBB is located in endothelial cells lining the smallest blood vessels supplying the brain.

The investigators found that S1PR2 is both sex- and strain-specific, with greater activity in female than in male brains and in SJL mice likely to get EAE. Its mechanism of action is to weaken adherens junctions between endothelial cells involved in the BBB. In this way, S1PR2 regulates permeability of the BBB, allowing inflammatory molecules to enter the brain tissue from the bloodstream. The resulting inflammation is a key factor underlying EAE and MS. 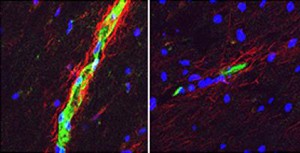 Blocking the action of S1PR2 pharmacologically improved the barrier function of the endothelial cells and strengthened the BBB, which reduced EAE severity in female SJL mice but not in males. Laboratory experiments using a BBB model showed that increased activity of S1PR2 activated cellular pathways known as Rho/ROCK, CDC42, and caveolin endocytosis-dependent pathway.

In turn, this changed formation of adherens junctions, causing loss of apicobasal polarity and relocation of CXCL12, which mediates inflammation, from outside to within the blood vessel. This weakened the BBB. The investigators then observed a similar chain of events within the living organism.

“These results identify a link between S1PR2 signaling and BBB polarity and implicate S1PR2 in sex-specific patterns of disease during CNS autoimmunity,” the study authors wrote.

Although there is a long journey from laboratory bench to clinically useful drug, these findings raise an intriguing possibility for an approach to MS therapy. The MS pipeline now includes an investigational drug that blocks other receptors in the same protein family but does not affect S1PR2. The investigators suggest that developing a drug that specifically blocks S1PR2 activity might be clinically useful.

Dr. Klein’s group is also helping to develop a tracer to monitor S1PR2 levels in the human brain during life, which might clarify the role of S1PR2 in MS.

“This is an exciting first step in resolving the mystery of why MS rates are dramatically higher in women and in finding better ways to reduce the incidence of this disorder and control symptoms,” Dr. Klein said in the news release.

The NIH/National Institute of Neurological Disorders and Stroke supported this study. Some of the study authors receive support from the Multiple Sclerosis Society, the National Science Foundation, Ruth L. Kirschstein Postdoctoral National Research Service Award, and the National MS Society.

Neurologists have appreciated the sex difference in MS risk for decades. However, the underlying reason for this disparity has largely remained a mystery. Dr. Klein’s study is unusual in that it identifies a nonhormonal factor associated with the heightened susceptibility of females to MS. The identification of S1PR2 as an important molecule in directing the trafficking of immune cells to particular regions of the brain and spinal cord may help to explain why some symptoms are more common than others in MS. The study is particularly exciting since fundamental observations made in mice were confirmed with human tissues, making S1PR2 a feasible therapeutic target for MS and other neuroinflammatory conditions.

Dr. Klein’s findings are at the frontier of a growing effort to develop a customized approach to medicine. They suggest that certain therapeutic interventions might be more effective in men than in women, and that strategies for preclinical drug development and clinical trial design should take this into account.

With regard to financial disclosures, I have served as a consultant for Novartis, manufacturer of Gilenya. A faculty member in my center is also site PI for the clinical trial of their new sphingosine-1-phosphate modulator in SPMS. I have also received nonrestricted educational grants from Biogen and Teva in the past.