None of the variables analyzed in a large cohort of patients with primary-progressive multiple sclerosis (PPMS) predicted disease progression measured by yearly change in Expanded Disability Status Scale (EDSS). Findings from this systematic literature review and analysis are published in the March issue of PLOS ONE (Stellmann et al., 2014).

“New agents with neuroprotective or neuroregenerative potential might be explored in [PPMS]—the MS disease course with leading neurodegenerative pathology,” wrote Jan-Patrick Stellmann of the Institute for Neuroimmunology and Clinical MS Research at University Medical Center Hamburg-Eppendorf in Germany and colleagues. “Identification of patients with a high short-term risk for progression may minimize study duration and sample size. Cohort studies reported several variables as predictors of EDSS disability progression but findings were partially contradictory.”

The study goal was to evaluate the effect of published predictors on PPMS disease progression, as reflected in annualized EDSS change, using a large cohort of persons with PPMS. The investigators identified alleged predictors for disease progression in PPMS from their systematic literature review and analysis of heterogeneous data from three prospective and five retrospective natural history cohort studies.

For retrospective validation of the identified predictors (age at onset, sex, type of first symptoms, and early EDSS changes), the investigators pooled individual case data from the Sylvia Lawry Centre and the Hamburg MS patient database.

The pooled cohort consisted of 597 PPMS patients (54% female) with mean age approximately 40 years and mean follow-up of 4.4 years. Based on 2503 EDSS measurements, mean change in EDSS was 0.35 per year. None of the investigated variables were significantly associated with change in EDSS.

“Our study could not validate gender, age at onset, type of first symptoms or early EDSS-progression as predictive for the EDSS dynamic in PPMS,” the study authors wrote. “Prospective cohort data of PPMS are yet very limited. Besides larger cohorts, new outcome measures for progressive MS are needed, as the EDSS seems to be too imprecise to detect disease progression in these patients.” 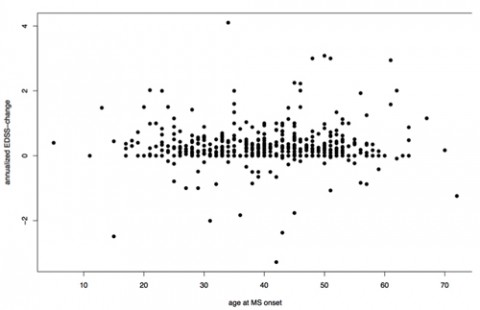 The inability to identify predictors of disease progression in PPMS may also relate to limitations inherent in the EDSS. These include very high inter- and intrarater variability and low risk for reaching one of the disability landmarks in the short term. In addition, EDSS landmarks primarily reflect mobility restrictions at the expense of other functional systems that could also contribute significantly to disability. Other limitations of this study include its retrospective design and lack of standardized follow-up.

“Based on these findings, it is not possible to give any recommendations about inclusion criteria for treatment trials in progressive MS nor [do] the available data allow an individualized risk counselling,” the study authors concluded.

The authors explore the impact of several clinical variables on EDSS disease progression in [PPMS] patients. A systematic literature analysis using the PRISMA guidelines identified eight natural history cohort studies on PPMS cases to select clinical predictors of disease progression, which have then been tested in a validation cohort of 597 PPMS patients available in the Sylvia Lawry Centre and the Hamburg MS patient database. The study did not validate the role of gender, age at onset, type of first symptoms, and an early EDSS progression (first 2 years from disease onset) in modifying the prognosis of the disease, calculated using the change in EDSS score over time.
Despite the limitations, which include the retrospective design, the lack of standardized follow-up, and the lack of MRI data, as properly raised by the authors, this study represents the largest analysis of patient-level pooled natural history cohort in PPMS. The lack of clinical predictors of disease progression in PPMS can be due to the intrinsic heterogeneity of the disease, or alternatively be due to the limitations of the EDSS scale, which is heavily biased toward mobility deficits and has a very high inter- and intrarater variability.
This study has important clinical implications. First of all, it is not possible to do individualized risk counseling with PPMS patients based on clinical criteria only, and more important it is very difficult to identify more active patients for enrollment in clinical trials, which are needed given the lack of available drugs to treat the disease.
Future research (there is an important ongoing international effort called The Progressive MS Alliance to support studies in this specific area) is needed to: a) design long-term natural history cohort studies on PPMS patients; b) develop a predictive algorithm of long-term prognosis combining clinical and MRI data; c) establish outcome measures of disease progression based not only on the EDSS scale but also on scales of impairment of cognitive function, quality of life, and walking tests like the Timed 25-Foot Walk which could be implemented in routine neurological follow-up visits of PPMS patients; d) collect and analyze biological material (PBMC, CSF, serum, and plasma) of PPMS cases to identify body fluid predictive biomarkers which could help in the prediction of long-term prognosis of the disease.
In the last years Primary-Progressive Multiple Sclerosis (PPMS) is the focus of scientific interest of different studies concerning Multiple Sclerosis. Although nowadays a growing number of disease modifying treatments for relapsing remitting MS are available in clinical practice, the therapeutic and management strategies in PPMS patients are still ineffective and not well understood. This study evaluated the impact of risk factors and predictors on EDSS progression in PPMS by performing a comprehensive literature research within the PubMed database. Though none of the analyzed variables were predictive for disease progression, this study is very interesting because it sheds light on the urgent need for scientific research on PPMS. Assessing predictors of disability progression in PPMS may [find] strategies to improve the quality of life of patients and to reduce the social and economic impact on society. Additional research [should] explore not only clinical predictors of disease progression but also MRI parameters with large systematic prospective studies. Conventional and non-conventional MRI techniques could give objective parameters of disease progression that could help the clinician to select patients in need of neurorehabilitation assistance and psychological support. In addition, since the majority of therapy approved for MS is ineffective in PPMS, there is an urgent need to better understand the pathogenesis and predictive risk factors of the progressive stage of the disease in order to develop novel biomarkers and novel therapeutic target for new clinical trials.