This cross-sectional study has revealed that elevated body temperature is associated with fatigue in relapsing-remitting multiple sclerosis, even in the absence of heat exposure 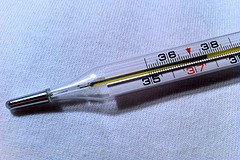 Elevated body temperature is associated with fatigue in patients with relapsing-remitting multiple sclerosis (RRMS), even without exposure to external sources of heat, according to a cross-sectional study published online February 19 in the Archives of Physical Medicine and Rehabilitation (Sumowski and Leavitt, 2014).

James F. Sumowski, Ph.D., from Neuropsychology and Neuroscience, Kessler Foundation, West Orange, New Jersey, and the Department of Physical Medicine and Rehabilitation, Rutgers, New Jersey Medical School, Newark, and Victoria M. Leavitt, Ph.D., from the Manhattan Memory Center, New York City, note that exposure to external sources of heat has long been known to increase fatigue in patients with MS. However, no one has investigated whether body temperature is increased endogenously (i.e., without exposure to heat) and whether such increases might be linked to fatigue in RRMS.

Patients with RRMS were mostly women who had neither experienced an exacerbation during the previous 6 weeks nor were taking corticosteroids or antipyretics. Patients in the SPMS group met the same inclusion criteria.

The investigators recorded participants' core body temperatures, and in the patients with RRMS, they used both the Fatigue Severity Scale (FSS) and the Modified Fatigue Impact Scale (MFIS) to assess fatigue.

They added that their findings might help explain why cooling garments and antipyretics tend to reduce fatigue in patients with MS.

Funding for this project was provided in part by the National Institutes of Health and the Kessler Foundation Research Center. Neither of the authors has reported conflicts of interest.

These findings are potentially very important from both clinical and pathophysiological perspectives. We know that fatigue is a common debilitating symptom in people with MS. Its etiology is unknown, and treatment is difficult. If patients with RRMS really have elevated resting body temperature, lowering body temperature may be an effective form of symptomatic treatment. The authors report that cooling garments and antipyretics have successfully reduced MS fatigue in other studies. In addition, if elevated resting body temperature correlates with fatigue, it might prove useful in the diagnosis of RRMS as well as serve as a biomarker regarding the effectiveness of disease-modifying therapy.

Although this is an important study, it has a number of important limitations that undermine the strength of its conclusions.

The results of this study are provocative and potentially important but cannot be taken on face value, given the article's significant methodological limitations. The study needs to be replicated with larger sample sizes matched for age and sex. Food and alcohol intake also need to be standardized.

The conclusions would be much more convincing if there were multiple temperature measurements at specific times throughout the day and on different days for each subject. Menstrual cycles also need to be recorded and plotted against temperature.

In addition, the clinical status of the patients with RRMS needs to be defined regarding the length of time since diagnosis, extent of disability, and current disease activity. Disease activity should be assessed by neurologic examination and magnetic resonance imaging. The presence of gadolinium-enhancing lesions, for example, would suggest active central nervous system inflammation, which, using the authors' hypothesis, should lead to elevated resting body temperature.

Another group that would be worth testing would be patients with clinically isolated syndrome. It would be interesting to observe whether body temperature is elevated at this early stage of disease or whether this phenomenon only occurs when patients evolve to RRMS.

One also wonders whether body temperature is elevated in other conditions in which fatigue is prominent, such as chronic pain, depression, and fibromyalgia. Participants in these diverse groups could be compared with healthy controls to further explore the intriguing hypothesis that there is a relationship between resting body temperature and fatigue.