A novel mouse model of optic neuritis without paralytic disease allows longitudinal monitoring of demyelination and neurodegeneration in the living animal, according to a study reported in the November issue of PLOS ONE (Lidster et al., 2013).

“The model is useful to examine therapies that target neuronal damage and specifically those that target optic neuritis and inflammation in the retina, which are generally the first symptoms in multiple sclerosis,” Sandra Amor, Ph.D., a professor of neuropathology and pathology at the VU University Medical Center in Amsterdam, Netherlands, told MSDF when asked for independent comment.

At present, there are no effective neuroprotective treatments for MS, an immune-mediated, demyelinating, and neurodegenerative disease. New models could facilitate drug development, and the visual system is an attractive target, as it is the most accessible part of the human central nervous system.

“The impetus for this study was to develop an animal model which could effectively be used for translational studies to detect novel neuroprotective agents for targeting MS and other inflammatory optic neuropathies,” lead author Katie Lidster, Ph.D., a postdoctoral fellow at Queen Mary University of London, told MSDF. “The project was also driven by the need to develop a refined model of experimental autoimmune encephalomyelitis (EAE) in accordance with the 3Rs (refinement, reduction, and replacement) … to reduce suffering of animals during experiments.”

The novel experimental model developed by Lidster’s group uses a C57BL/6 mouse line, which expresses transgenes for a myelin oligodendrocyte glycoprotein (MOG)-specific T cell receptor and a Thy1 promoter-controlled cyan fluorescent protein restricted to the retinal ganglion cell. Unlike most rodent autoimmune models of MS, these mice develop spontaneous or induced optic neuritis without paralytic disease.

“As the model has been developed on the C57BL/6 background, commonly used for the generation of transgenic mice and readily available from commercial breeders, this should help the rapid dissemination and adoption of this model by other groups,” the study authors wrote.

The MOG model allows serial monitoring of demyelination and neurodegeneration in the living animal using electrophysiology, visual sensitivity, confocal scanning laser ophthalmoscopy (cSLO) and optical coherence tomography (OCT). All of these techniques are appropriate and feasible parameters to follow in human trials. 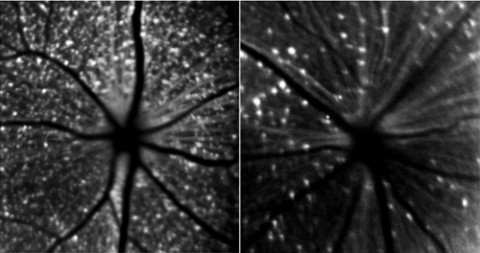 “C57BL/6 mice are easy to manipulate in a research laboratory,” Paula Pifarré, a neuroimmunologist at Instituto de Biotecnología y Biomedicina, Autonomous University of Barcelona in Spain, told MSDF when asked for independent comment. “However, this model requires transgenic mice and specific mice-adapted equipment that is difficult to acquire.”

Lidster noted that these transgenic mice can be purchased from the Jackson Lab. According to Amor, working with this mouse model is no more difficult than working with other mice.

“Compared with the typical MS model (EAE), this new model uses a milder and quicker induction process that allows reducing the number of animals and obtaining outcomes in a shorter period of time,” Pifarré said.

“This mouse develops optic neuritis that can be visualized in living animals, meaning that efficacy of therapies can be more quickly assessed as well as assessing the effect of drugs longitudinally,” Amor said. “Administration of a sodium channel blocker (oxcarbazepine) was shown to be effective in this model by inhibiting the neurodegeneration and optic neuritis, indicating that such treatments can be useful for treating these symptoms observed in early MS.”

It therefore appears that this model is not only feasible for testing new therapeutic approaches to MS but also reflects pathophysiological improvements. The study authors suggested that the mechanism of neuroprotection with oxcarbazepine was most likely to occur at the level of the axon or nerve, or perhaps through inhibition of microglial activity, which is a key process underlying progressive MS.

“The main take-home message is that you don’t need to use classical EAE for immunological and neuroprotective studies and the novel animal model can be used instead, which has significant 3Rs benefits,” Lidster said. “The novel model has been used to validate new drug targets and inform the development of a novel trial design in acute optic neuritis (NCT01451593).”

Lidster’s group has already started a clinical trial translating the concept of sodium channel blockers, such as phenytoin. She notes that other trials using the optic neuritis model include the LINGO-1 trial, the Californian remyelination trial, and the amiloride trial.

“The main strengths of this [model] are that neurodegeneration can be monitored in live animals,” Amor said. “This means that the efficacy of neuroprotective therapies can be monitored much more rapidly, since comparative studies in other models require more extensive pathology studies, which are time-consuming and costly. The model is also more reflective of the early symptoms of eye problems experienced in the early stages of MS.”

However, Amor pointed out that the OCT needed to monitor disease in a mouse model is expensive. Furthermore, the study authors noted that it is technically challenging to perform electrophysiology and ocular OCT and cSLO imaging at the same time.

“The main strengths of this study are economic and humane benefits, because they apply the 3Rs principle for animal experimentation, Replacement, Refinement and Reduction of animals in research,” Pifarré said.

According to the study authors, the economic benefits of their model compared with existing EAE models include lower costs of labor and monitoring, reduction in numbers of animals used, and reduction in the time in procedure. In contrast, EAE has the advantage of an easily visualized neurological outcome (paralysis) that varies and can be monitored over time. But evaluation of this outcome is often subjective and observer-dependent.

“It’s supposed that this model could be used for assessment of immune function and neurorepair strategies; however, the immune and neurological components are poorly characterized, because it is a novel model and further studies must be done to answer these questions,” Pifarré added. “Another limitation of this model is the availability of the instruments to measure ophthalmologic parameters in a mouse. I believe this model could be useful to study immune and neuroprotective drugs, but I don’t think it will be useful to study demyelination/remyelination, which is an essential process to improve the quality of life of MS patients.”

In terms of additional research, Lidster recommends further refining the model by modifying the immunization protocol to improve demyelination and monitor remyelination.

“To validate this model, treatment with drugs that are being used [currently] in MS therapy must be tested,” Pifarré concluded. Amor agreed that more neuroprotective therapies should be assessed with this model.

The Barts and the London Charity, the Multiple Sclerosis Society of Great Britain and Northern Ireland, the National Multiple Sclerosis Society, USA, the National Centre for the Replacement, Refinement & Reduction of Animals in Research, and the Wellcome Trust funded this study. Quark Pharmaceuticals provided the siRNA. The funders and Quark Pharmaceuticals had no role in study design, data collection and analysis, decision to publish, or manuscript preparation. The study authors did not receive funds or incentives from Quark Pharmaceuticals for undertaking the study. Dr. Lidster, Dr. Pifarre, and Dr. Amor reported having no financial disclosures.