Stem Cells Stop the Train of MS Damage in Mice

Stem cells grown from mature cells stem the tide of myelin destruction in mice with an experimental form of multiple sclerosis, but not by serving as replacements, as one might guess. Instead, the transplanted cells thwart the disease by secreting a factor that promotes the growth and protection of cells already in residence. And rather than shying away from the inflammatory battlefields raging in the central nervous system (CNS), the transplanted cells zero in on those areas most ravaged by disease (Laterza et al., 2013). 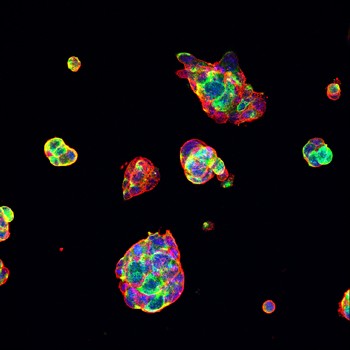 “Given their origin, these cells could ideally be generated from patients’ own cells,” said first author Cecilia Laterza, Ph.D., a postdoc at the Institute of Experimental Neurology at the San Raffaele Scientific Institute in Milan, Italy, in an interview with MSDF. The findings, published October 29 in Nature Communications, could help pave the way for personalized stem cell treatments, Laterza said.

The investigators, led by Gianvito Martino, the director of the Division of Neuroscience at San Raffaele Hospital, capitalized on a relatively new technique to develop neural stem cells from mature cells.

In a landmark 2006 study, Shinya Yamanaka and colleagues showed that stem cells could be made and not just born. Yamanaka’s team tweaked adult cells and converted them to “induced pluripotent stem cells” (iPSCs), which are theoretically capable of giving rise to any cell in the body. This opened up the possibility of treating patients with stem cells derived from their own tissues.

A recent study led by Wenbin Deng, Ph.D., an associate professor at the Center for Neuroscience at the University of California, Davis, showed that OPCs derived from mouse iPSCs could myelinate the nerves of shiverer mice, which are genetically altered to be myelin-deficient (Jiang et al., 2013). Another study showed that OPCs derived from human iPSCs could also myelinate the nerves of these mice (Wang et al., 2013). But neither of these studies examined how the transplanted cells would fare when introduced into the hostile inflammatory environment that characterizes MS.

A novel mechanism of neuroprotection

Laterza, Martino, and colleagues decided to test the stem cells in mice with an experimental form of multiple sclerosis called experimental autoimmune encephalomyelitis (EAE), in which researchers trigger the rodent’s immune cells to attack myelin. Approximately 13 days following disease induction, the mice start to show signs of paralysis, first in the tail and then in the hind limbs. In the chronic EAE model used in this study, the paralysis then stabilizes.

The investigators used a concoction of growth factors to produce NPCs from iPSCs. They could then have nurtured the NPCs to become OPCs, but instead the investigators set out to treat the mice with the undifferentiated NPCs, as their previous studies had shown that the adult NPCs extracted from the brain could provide neuroprotective benefits.

When the researchers analyzed the mouse spinal cords, they found that the transplanted NPCs zeroed in on the areas under the most intense immune attack. As shown in previous studies with adult NPCs extracted from the rodent brain, the iPSC-derived NPCs expressed chemokine receptors that attracted them to the inflammatory sites. Once there, the NPCs remained in their undifferentiated state for at least 20 days rather than morphing into myelin-producing cells.

Despite the fact that the NPCs held fast to their stem-cell status, the researchers found that the spinal cords of the NPC-treated mice showed reduced demyelination and less axonal damage than those of the untreated mice. A close accounting of the cells in the spinal cord after NPC injection showed increased numbers of proliferating OPCs and mature oligodendrocytes thriving in the damaged areas, and a reduced number of apoptotic, or dying, oligodendrocytes. The transplanted NPCs, the researchers concluded, somehow enhanced the growth, differentiation, and function of the recipients’ own myelin-producing cells.

In response to inflammatory cytokines NPCs secrete leukemia inhibitory factor (LIF), according to experiments in cell culture. This factor, the investigators found, fueled the growth of OPCs and promoted their maturation into full-fledged oligodendrocytes. When the investigators continually infused a LIF-blocking antibody directly into rodents’ brains during treatment, the therapeutic effects of NPC treatment were abolished.

The team next sought to determine how the neuroprotective benefits afforded by NPCs might alter the course of the immune response in the CNS. The researchers found no differences between NPC-treated and untreated mice in the numbers of immune cells infiltrating the CNS 30 days after disease induction, even as the therapeutic effects of the NPCs started to kick in. But by 40 days, levels of inflammation were significantly reduced in the NPC-treated animals. The treated mice also sported a less leaky blood-brain barrier than the untreated mice.

Laterza proposed that the NPCs’ neuroprotective effects decrease the levels of debris that normally accumulate due to the extensive tissue damage inflicted by immune attack. The debris, which serves as bait for more immune cells and compromises the blood-brain barrier, exacerbates the inflammation. The NPCs may therefore calm the immune system’s feeding frenzy and halt the destructive cycle of inflammation.

The paper provides “additional confirmation that NPCs are effective at ameliorating MS disease in mice, which is encouraging,” said Benjamin Deverman, Ph.D., a senior research scientist at Caltech, in an interview with MSDF. Deverman, who was not involved in the current study, previously showed that LIF promotes myelin repair in mice suffering from a drug-induced form of demyelination (Deverman and Patterson, 2012).

Deverman envisions one day delivering LIF via gene therapy in people with demyelinating disorders such as MS, but said that transplanting LIF-secreting NPCs that home directly to damaged zones also holds promise. Deverman notes, however, that although Martino’s team showed that NPCs were capable of secreting LIF, the authors did not exclude the possibility that other cells were responsible for secreting the factor, a caveat the authors acknowledged as well.

A 2011 study led by Jingwu Zhang at the Chinese Academy of Sciences in Shanghai, China, showed that NPCs derived from mouse embryonic stem cells (rather than iPSCs) could ameliorate EAE via LIF (Cao et al., 2011). In this study, the investigators injected the NPCs intravenously, rather than intrathecally, and showed that LIF worked by inhibiting the activity of inflammatory Th17 cells, rather than by promoting oligodendrocyte development and function. Laterza said that while several differences exist between the studies, the source of the discrepancy likely lies in the different delivery methods used by the researchers—a hunch Deverman shares.

Regardless of the way the iPSC-derived NPCs dampen disease, Laterza said “extensive work” will be needed before the cells can be used in humans with confidence. Currently, Laterza notes, researchers must genetically or chemically alter adult cells to produce iPSCs. Transplanting the altered cells could lead to unintended consequences, such as tumor growth, in human recipients.

While a number of caveats remain, the study provides “a wider proof of principle for cell therapy in MS,” said Deng, the leader of the study that showed transplanted OPCs helped shiverer mice. “But it’s unlikely to be the whole story.”