In findings that may speed the search for drugs that can postpone or prevent progressive forms of multiple sclerosis (MS), a research team has identified a handful of compounds that are already on the market for other diseases and can boost myelination in rodent neuron cultures and mouse models of MS.

The study, published online October 9 in Nature (Deshmukh et al., 2013), focuses on benztropine, one of the brightest spots in an image-based screen of nearly 100,000 small molecules. Benztropine was approved for Parkinson's disease in 1954 but has been largely superseded by newer agents that more directly affect dopamine function and are better tolerated by patients.

In the study, benztropine pushed the maturation of myelin-making cells in mouse neuron co-cultures and resulted in significant remyelination and functional recovery in both inflammatory and demyelinating mouse models of MS. In one finding, a prophylactic dose of benztropine doubled the number of mature oligodendrocytes in the spinal cord in the acute disease phase of the experimental autoimmune encephalomyelitis (EAE) mouse model. EAE mice exhibit some aspects of the inflammatory myelin damage typical of relapsing-remitting MS. In the rodent neuron co-culture dish, benztropine more than doubled the proportion of myelinated axons.

In EAE mice, benztropine prompted remyelination in the midst of the induced autoimmune axon damage, but it worked better and at a lower dose in combination with either of two approved immunosuppressive agents: interferon-beta and fingolimod. In combination with the lower benztropine dose, the researchers found, less fingolimod was also needed to relieve symptoms. The benefits of the lower-dose double whammy of immunosuppression and remyelination could translate to fewer side effects for both drugs, the authors speculated.

Altogether, the study is "a monumental experimental effort" that "may finally raise the hope of myelin repair," wrote Hartmut Wekerle, M.D., of the Max Planck Institute of Neurobiology in Martinsried, Germany, and Edgar Meinl, M.D., of the Institute of Clinical Neuroimmunology in Munich, Germany, who were not involved in the study, in an accompanying commentary in the same issue of Nature (Werkele and Meinl, 2013).

Caution against off-label use

"It's a pretty cool paper," said Teresa Wood, Ph.D., a cell developmental biologist at New Jersey Medical School at Rutgers University in Newark who investigates the molecular pathways underlying oligodendrocyte differentiation and myelination. She was not involved in the study. "Ahead of time, there was no reason to think benztropine would have an effect," Wood told MSDF. "Now the aim is to figure out why it has this effect. That's the biology. In the meantime, there is a compound in hand to test."

"It's a huge advantage when you're looking for a new drug to find one that is already approved with huge amounts of safety data," said David Simon, M.D., Ph.D., a movement disorders specialist at Beth Israel Deaconess Medical Center and Harvard Medical School in Boston, who was not involved in the study. "Things can move much quicker into clinical trials."

The optimism of the authors and others is tempered by the well-known side effects. Benztropine drug activity can actually mimic some MS symptoms: dizziness, confusion, depression, memory impairment, and blurred vision. Ultimately, Wekerle and Meinl predicted, researchers will have to develop a variant of the drug that can cross the blood-brain barrier and repair myelin "but lack its dark side."

In an interview with MSDF, Simon described the results as "promising and worthy of further study," but he strongly cautioned against off-label use. Because of its multiple mechanisms of action and high risk of side effects, benztropine needs safety testing to evaluate how well it is tolerated in doses that may be effective in people with MS, Simon said. "This study looked at one outcome: remyelination," he said. "But there could be substantial negatives." Simon has one patient with both Parkinson's and MS, and he said he would not choose benztropine. (Simon is a scientific advisory board member of the Accelerated Cure Project, the nonprofit publisher of MSDF.)

The study has its roots in a stem cell project that Luke Lairson, Ph.D., was wrapping up as his postdoctoral fellowship transitioned to a faculty position in the laboratory of co-author Peter Schultz, Ph.D., at The Scripps Institute in San Diego, California. Lairson and his colleagues had been trying to identify molecules that would transform skin cells into myelinating cells for regenerative therapy.

"Then it dawned on us that the central nervous system already has an endogenous population of cells, known as oligodendrocyte precursor cells (OPCs)," Lairson told MSDF. "These OPCs can migrate to sites of injury and differentiate into mature oligodendrocytes that can remyelinate damaged axons for repair and remission of disease."

Postmortem brain samples from people with MS show evidence of remyelination (Rice et al., 2013). At some stage, OPCs seem to stall out and cannot differentiate into mature cells able to repair the myelin sheath, observed Bente Finsen, M.D., Ph.D., of the University of Southern Denmark in Odense, in a talk several weeks ago at the 2013 annual congress of the European Committee for Treatment and Research in Multiple Sclerosis (ECTRIMS). Demyelinated axons are more vulnerable to neurodegeneration, a major cause of permanent disability in MS.

Remyelination "is the best validated neuroprotective strategy for MS patients," Bruce Trapp, Ph.D., a neuroscientist at the Lerner Research Institute of the Cleveland Clinic in Ohio, said in the same ECTRIMS2013 session. "If an axon is remyelinated, it will increase the likelihood that it will survive. It is the best characterized and most extensive repair process in the adult human brain. And it's the best documented indication of new cell production in the adult brain. There's no other condition that generates more new cells in adult brain than a remyelinating lesion."

Lairson, Schultz, and their co-authors decided to look for traditional small molecules, ideally with the potential to be given as oral drugs, that would stimulate OPCs in the brain to mature and make myelin. They turned to the tools they had at hand, a major drug-discovery facility now known as the California Institute for Biomedical Research and funded by an unrestricted grant from Merck.

Led by graduate student Vishal Deshmukh, the team started by mimicking the disease in a dish for high-throughput screening of molecules. "Our general approach was a phenotypic cell-based assay as opposed to a validated drug target," Lairson told MSDF. "Rather than saying, we want to hit the receptor, we hit the cells directly."

The screening assay used OPCs from rat optic nerve tissue on the cusp of maturing, cultured in tiny wells. The image-based analysis measured the amount of myelin basic protein, a key product of myelin-making cells and an indicator that a molecule triggered differentiation. After a promising pilot screen of 6000 molecules, including 2000 FDA-approved drugs and those known to penetrate the blood-brain barrier, the team tested more than 90,000 additional diverse compounds from academic and commercial drug libraries.

An important next step for the dozens of molecules that made the first cut, wrote Werkele and Meinl, was a second evaluation to test how well the compounds triggered actual myelination activity by the rat OPCs co-cultured with mouse neurons. Benztropine stimulated more myelin wraps than untreated cultures. They further narrowed the candidates by screening against immune cell activation to make sure they were not immunosuppressive.

Some compounds were immunosuppressive and induced OPCs to mature and proliferate. Clinically, it would be valuable to address both arms of MS, but "from a scientific standpoint we can only work with one arm because of the induced nature of the EAE model," said collaborator and co-author Brian Lawson, Ph.D., a research immunologist at Scripps. "We would need a spontaneous MS animal model to test both." 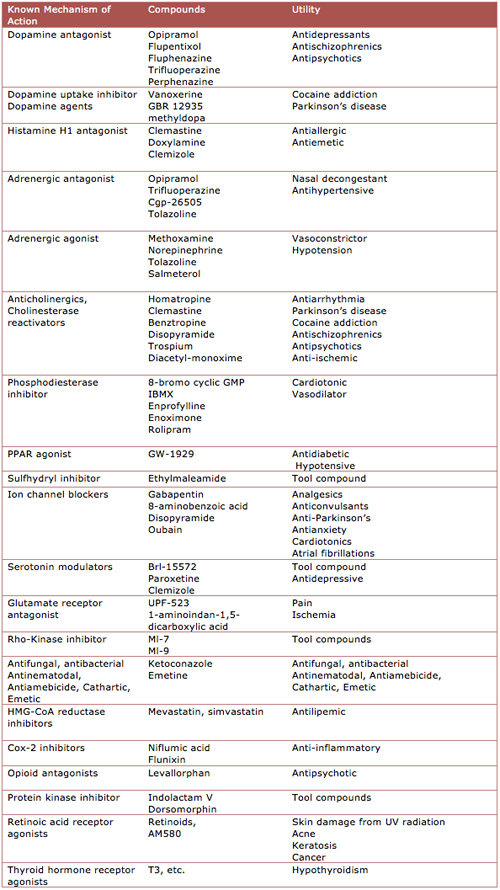 Tests of benztropine and a group of related compounds in EAE models showed dramatic effects that "were almost too good to be true," Lairson said. The team focused on the approved benztropine as a potential experimental MS therapy that could be fast-tracked for human studies. The researchers performed a barrage of in vitro and in vivo experiments. Results from an adoptive transfer model of EAE provided more evidence that immunosuppressive activity is unlikely. Most convincing were results in the cuprizone model, in which demyelination is chemically induced. There, benztropine speeded up the spontaneous remyelination that happens when the chemical is discontinued.

The researchers concluded that benztropine prompted OPCs to differentiate into mature myelin-producing cells, but they conceded that benztropine could be working in more ways than one, including other protective effects from increased oligodendrocyte numbers. Meanwhile, in an experimental attempt to isolate the molecular mechanism of remyelination, they pinpointed specific muscarinic receptors (M1 and M3) on OPCs. Last year, a research group in Italy reported that the neurotransmitter acetylcholine works through the receptor subtypes M1, M3, and M4 to maintain OPCs in their progenitor state. Activating those receptors prompted OPC proliferation and inhibited differentiation in OPCs (De Angelis et al., 2012).

The remyelinating effects of benztropine appear to spring from the same anticholinergic mechanism thought to be pharmacologically active in Parkinson's. (Benztropine is also a centrally acting antihistamine and dopamine reuptake inhibitor.) In the MS clinic, other anticholinergic drugs have been prescribed for years to help with bladder control, noted John Corboy, M.D., a neurologist and founder of the Rocky Mountain Multiple Sclerosis Center at the University of Colorado School of Medicine in Aurora. The new study included several of those compounds in the screen. Two of those (trospium and oxybutynin) induced maturation of myelin-making oligodendrocytes in the preliminary screening assay, while others (darifenacin, tolterodine, and solifenacin) did not, the paper reported.

"There are a small but significant number of molecules presently under study that will potentially augment normal repair processes with enhanced myelination," Corboy said. "If this well-known old molecule has the properties suggested in cell culture and animal, it's appropriate to consider a phase 2 study for safety and efficacy in people."

Lairson told MSDF he is in discussion with clinicians and nonprofit foundation funders about how to design a human study. "The challenge is the endpoint," he said. "We would have to do an imaging-based study [to detect remyelination in the brain or spinal cord], which is expensive. It's hard to get funding to do that."

The team is also evaluating other potential remyelinating agents identified in the high-throughput screening study, including novel compounds that need further study. Results will be detailed in subsequent publications, the authors told MSDF.

The authors declare no competing financial interests. The work was supported by the Skaggs Institute for Chemical Biology, the California Institute for Regenerative Medicine, and National Science Foundation predoctoral fellowships.