Teriflunomide can be considered a reasonable alternative to interferon β-1a in treating patients with relapsing forms of multiple sclerosis (RMS), according to a new phase 3 trial of 324 patients. 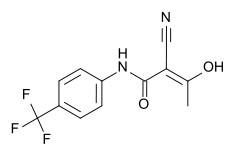 The article, published online October 14 in the Multiple Sclerosis Journal, was authored by Patrick Vermersch, PhD, from the Department of Neurology, University of Lille Nord de France, France, and colleagues.

There were adverse effects, however; namely, increases in alanine aminotransferase, thinning of hair, diarrhea, influenza, nausea, and paresthesia.

None of the patients had previously taken either of the study drugs or leflunomide, natalizumab, cladribine, mitoxantrone, or other immunosuppressants, and none of them had been exposed to other interferons, glatiramer acetate, intravenous immunoglobulins, or cytokine therapy within the 3 months before entry into the study.

"The primary composite endpoint was time to failure, defined as first occurrence of confirmed relapse or permanent treatment discontinuation for any cause," the researchers wrote.

As secondary endpoints, they included analysis of annualized relapse rates and the Fatigue Impact Scale. They also had patients complete the Treatment Satisfaction Questionnaire for Medication.

The average exposure to the drugs was about 63 weeks.

The researchers observed no significant differences in time to failure between the 3 treatments. In addition, they saw no difference in annualized relapse rates between the 14-mg dose of teriflunomide and interferon β-1a (0.22 versus 0.26; P = .6). However, they did note differences using the lower, 7-mg dose of teriflunomide. Patients in that subgroup had significantly higher annualized relapse rates (0.41 [P = .03] versus interferon β-1a).

Fatigue seemed to be more of a problem with patients receiving interferon β-1a, but that problem was deemed to be significant only when compared with the 7-mg dose of teriflunomide, not the 14-mg dose.

The researchers also noted that patients receiving teriflunomide reported being significantly more satisfied with their treatment, as assessed by the Treatment Satisfaction Questionnaire for Medication.

In addition, the safety profile of teriflunomide appeared to be in line with findings from previous studies.

The authors emphasized that more comparative studies are needed. "Formal conclusions on effectiveness are challenging, as a larger patient popula­tion, longer treatment duration, and magnetic resonance imaging outcomes would be needed for a more robust com­parison," they wrote.

In the meantime, they said, "Based on these outcomes, teriflunomide can be considered as an alternative therapy for patients with RMS for whom treatment with interferon is being considered."

This study (NCT00883337) was funded by Genzyme, a Sanofi company. Editorial support was provided by Fishawack Communications, Ltd, which is also funded by Genzyme, a Sanofi company. Corresponding author Dr. Vermersch has received consulting fees and/or research support from Bayer, Biogen Idec, GlaxoSmithKline, Merck Serono, Novartis, sanofi-aventis, and Teva Pharmaceuticals. The other authors together disclosed a large number of potential conflicts of interest. For the entire list, see the full open-access article.