Corticosteroids Ineffective for Many With Relapsing MS

This study of nearly 4500 patients with MS concluded that although most felt corticosteroids helped them during relapses, a sizable percentage perceived no discernible effect or even harm

Even though corticosteroid therapy, along with other therapies, is a cornerstone of managing relapsing-remitting multiple sclerosis, relatively little data exist on how patients perceive the efficacy and overall value of these treatment approaches. 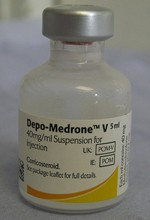 Now, results of a new survey of 4500 MS patients suggest that although many feel corticosteroids are an effective therapeutic option, others are not convinced (Nickerson and Marrie, 2013).

The study appears in the current issue of the journal BioMed Central Neurology and was authored by Molly Nickerson, Ph.D., medical sciences liaison officer at Questcor in Hayward, California, along with Ruth Ann Marrie, M.D., an associate professor of internal medicine and community health sciences at the University of Manitoba in Winnipeg, Canada.

"Overall, patients with relapsing multiple sclerosis who receive treatment report better outcomes than those who are simply observed," the authors wrote. "However, a sizeable percentage of patients feel that their symptoms following corticosteroid treatment are worse than pre-relapse symptoms and that treatment had no effect or worsened symptoms."

In this retrospective study, the co-investigators evaluated self-reported responses from 4482 people who took part in the North American Research Committee on Multiple Sclerosis (NARCOMS) Registry. The researchers focused especially on how the patients were evaluated and treated as well as to what extent and how quickly they recovered from their exacerbations. The mean time since most recent relapse was 11 months.

The breakdown in treatment types was as follows:

Other treatment strategies were tried as well, including administration of plasmapheresis, adrenocorticotropic hormone, intravenous immunoglobulin, and various others.

The investigators said patients harbored considerably different views about the efficacy of the treatments they had received for their most recent relapse.

For example, when asked about their symptoms, 32% of IVMP-treated patients and 34% of patients treated with oral corticosteroids said their symptoms were worse following 1 month of therapy than they were prerelapse.

About 39% of patients managed with observation alone said their symptoms were at least as bad after treatment as before.

When asked about their perceptions of treatment efficacy, about 30% of IVMP-managed patients reported that treatments either made relapse symptoms worse (13%) or had no effect (17%).

Among patients treated with oral corticosteroids, 13% said their symptoms were worse after treatment; a quarter felt the treatments had no effect.

In patients who were managed with observation alone, 59% reported no appreciable change in symptoms; 17% said their symptoms were worse.

The authors said their data demonstrate that to ease the severity of relapse-related pathophysiology and improve patients' health-related quality of life (HRQoL), researchers need to come up with viable alternatives to current therapies.