A new technology enhances stem cells to generate myelin-producing cells. This may allow regenerative therapy in MS and other brain diseases.

A new method of generating embryonic stem cells (ESCs) that can ultimately produce myelin may allow regenerative therapy in multiple sclerosis (MS) and other neurological diseases, according to findings of a rodent study  published online August 13, 2013, in Stem Cells (Jiang et al., 2013). 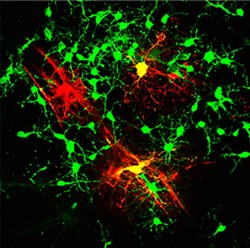 A novel biological approach to treatment of such diseases could be cell replacement therapies, which might compensate for impaired function of nerve cells and their connections. Pluripotent stem cells (PSCs) are undifferentiated cells with the potential to differentiate into various mature cell types.

Brain cells include neurons, which transmit and receive impulses resulting in thought, sensation, and movement; and glial cells, which surround, support, and communicate with neurons. Oligodendroglial progenitor cells (OPCs) give rise to oligodendrocytes, a type of glial cell that produces myelin.

Studies in rodent models have revealed that the cell membrane of brain OPCs contains a variety of ion channels. In addition, some brain OPCs express the voltage-gated sodium channel (NaV), which gives the cells "spiking" properties, or the capacity of making action potentials. The action potential is the electrical impulse that travels down the nerve fiber, allowing cells to communicate with one another.

Whether the electrophysiological properties of OPCs derived from PSCs are similar to those of OPCs occurring naturally in the brain is still unknown, as is the role of NaV in the functional maturation of OPCs. To address these important questions, Dr. Deng’s group conducted experiments using a mouse embryonic stem cell (mESC) line.

The novel methods developed by Dr. Deng’s group not only efficiently induced ESCs to differentiate into OPCs, but they also yielded a purer population of OPCs than was possible using techniques developed by other investigators.

Unlike naturally occurring brain OPCs, the mESC-derived OPCs (mESC-OPCs) lacked NaV in their cell membranes. Although they were able to generate certain currents, they failed to produce spikes when electrically stimulated and were therefore referred to as “non-spiking mESC-OPCs.”

“We engineered the cells to afford them an enhanced capacity to spike, and that appeared to give them an edge for maturing into oligodendrocytes and producing better myelin,” Dr. Deng said.

This was the first successful experiment generating OPCs with spiking properties, and it allowed the investigators to compare the capabilities of spiking and non-spiking OPCs.

Dr. Deng’s group introduced viral DNA coding for a subunit of the NaV sodium channel into the ESC-derived OPCs. These modified OPCs, referred to as “spiking mESC-OPCs,” then expressed that sodium channel in their membranes and developed the ability to generate spikes. Unlike non-spiking OPCs, only spiking OPCs received electrical input from neurons in cell culture.

“This reinforces the hypothesis that there are two types of OPCs, which is still controversial,” Helene Gautier, Ph.D., a research associate at the University of Cambridge, Wellcome Trust-Medical Research Council Cambridge Stem Cell Institute in the U.K., told MSDF.

Dr. Deng’s group further tested the spiking mESC-OPCs by transplanting them into the spinal cord and brain of so-called shiverer mice, which are genetically unable to produce myelin. Compared to non-spiking mESCOPCs, the spiking mESC-OPCs were more likely to differentiate into oligodendrocytes able to synthesize myelin basic protein. Although both types of OPCs matured into oligodendrocytes and produced myelin, those from spiking OPCs produced longer and thicker myelin sheaths around axons.

“This shows that the spiking type is better in differentiating into oligodendrocytes, and it is the first time such a difference in the behavior of the two types of OPCs has been shown in vivo,” Dr. Gautier said. “Therapeutically, it means that the spiking type has the best potential” for future clinical applications.

When asked for independent comment, Stem Cells Editor Jan A. Nolta, Ph.D., professor and director of the Stem Cell Program and Institute for Regenerative Cures at the University of California, Davis, called this work “very promising.”

“Replacing glial cells with the enhanced spiking OPCs to treat neural injuries and diseases could prove to be a more successful strategy than replacing neurons,” she said. “For all cells, including neurons, the microenvironment in which they exist is incredibly important and dictates their behavior to a large extent. Replacing OPCs in this environment may be an excellent strategy for enhancing the regeneration of neural tissue.”

However, Ann Tsukamoto, Ph.D., executive vice president of scientific and strategic alliances at StemCells Inc. in Newark, California, notes that neural stem cells are very early in development compared to these cells in mature organs.

“Since the engraftment was tested in shiverer mice, which have a short life span, we cannot know, only following these cells for 2-3 weeks post-transplant, whether the mESCs could eventually myelinate to a similar level [as spiking cells],” she said. “The snapshot of myelination at the time point they examined suggests the difference in potential of the cells. However, they do engraft to a similar level and myelinate, albeit to a lesser extent, so it could be that at a later time point the myelination could ‘catch up.’ ”

“I wonder if spiking OPCs could be obtained by different culture conditions instead of transfection,” Dr. Gautier said. “More needs to be known about the role of the non-spiking type, [because] if two types exist, there must be a function for both. We also need to know more about how the cells migrate and different types of injections, as using multiple injections directly into MS lesions is not really feasible.”

According to Dr. Deng, this type of research has direct implications for MS. “These unique spiking cells are a candidate of new cell therapy for treating many human disorders, such as pediatric leukodystrophies, periventricular leukomalacia, cerebral palsy, autism, epilepsy, schizophrenia, spinal cord injury, trauma, and stroke, as well as neurodegenerative diseases, in all of which myelin defects are now recognized to be involved,” Dr. Deng said.

Furthermore, a variety of conditions not traditionally considered to be myelin-related, such as schizophrenia, epilepsy, and amyotrophic lateral sclerosis, are now considered to involve defective myelin.

In adult humans, nerve tissue is highly limited in its ability to regenerate in response to disease or injury, despite the presence of early progenitor cells such as OPCs. Replacing neurons would be more difficult than replacing glial cells with spiking OPCs, according to Dr. Deng. He suggests that the latter strategy may be the best approach to regenerate healthy neural tissue by providing the proper support and environment for neurons.

Dr. Deng told MSDF that the aim of future work will be to generate spiking cells that can produce myelin and can be used clinically to repair damaged neurons.

Grants from the U.S. National Institutes of Health, the National Multiple Sclerosis Society, Shriners Hospitals for Children and the California Institute for Regenerative Medicine supported this study. Dr. Deng and Dr. Nolta reported having no financial disclosures.