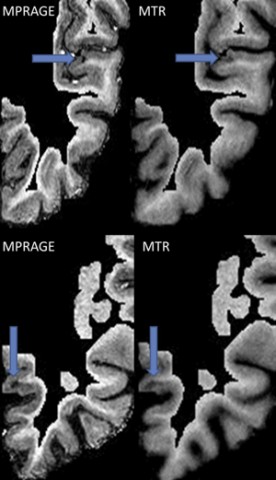 “The process underlying disability progression in MS is so poorly understood,” lead author Niraj Mistry, M.A., M.B., BChir, MRCP, a Neurology registrar at Nottingham University Hospitals NHS Trust, University of Nottingham, Queen’s Medical Centre, UK, told MS Discovery Forum. “We have tended to neglect that which we cannot easily see, and the role of cortical lesions in disability has not been explored as thoroughly as more easily detectable features of the disease. Since our understanding of it is poor, perhaps it is unsurprising that we offer no form of disease modification therapy to stem progression once it has started.“

To test the hypothesis that cortical lesions cause NAWM degeneration, the investigators examined the correlation between cortical lesion load and magnetization transfer ratio (MTR) of the NAWM in 19 patients with MS.

“The rationale for this study is that the cortex contains so much critical cellular machinery that lesions in the cortex could eventually lead to the degeneration of axons in the white matter, which is the hallmark of progressive MS,” Dr. Mistry said. “The main take-home message is that cortical lesions correlate with the degenerative changes seen in progressive forms of MS, and whilst correlation does not prove a cause, further studies may show causality.”

“This study uses a potentially powerful tool, 7-tesla MRI, that is likely to lead to improved understanding of the pathogenesis of MS, in particular the progressive phase of this disease,” Don Mahad, MRCP, M.D., Ph.D., a senior clinical research fellow at the Centre for Neuroregeneration of the University of Edinburgh, U.K., told MS Discovery Forum when asked for independent comment. “The investigators identified cortical lesions based on two imaging methods, MPRAGE and MTR, the latter also an estimate of axon loss in the white matter.”

The study authors suggested that their findings are consistent with the hypothesis that cortical lesions cause NAWM degeneration, implicating cortical lesions in the pathogenesis of NAWM axon loss. Support for this hypothesis includes histopathological evidence of correlation between diffuse injury of the NAWM and cortical demyelination, both characteristic of primary progressive MS (PPMS) and secondary progressive MS (SPMS; Kutzelnigg et al., 2005).

However, NAWM MTR in this study sample did not correlate with disability score on the Expanded Disability Status Scale (EDSS).

“Interestingly, the investigators found a correlation between cortical lesion load and axon loss in the so-called NAWM, which we know is far from normal,” Dr. Mahad said. “They then interpret the correlation with a corticocentric view and suggest a causative role for the gray matter pathology in the white matter changes. The claim for a causative role must be treated with caution, as a statistically significant correlation does not provide proof of causation.”

They noted that the signal-to-noise ratio and spatial resolution of 7-T MRI allowed use of MTR not only to measure average tissue properties, but also as an imaging modality.

“Due to the cross-sectional design of the study, the results cannot provide a definite answer on the causative role of cortical lesions on NAWM injury, or vice versa,” said Caterina Mainero, M.D., Ph.D., director of MS research at the Athinoula A. Martinos Center for Biomedical Imaging, Department of Radiology, Massachusetts General Hospital (MGH), in an interview with the MS Discovery Forum. Dr. Mainero was not involved in the study. “More conclusive information could be achieved by longitudinal studies, and by looking at regional specific associations between cortical demyelination and connected WM regions. Additionally, it could be interesting to assess the role of inflammation and microglia activation on both cortical and NAWM degeneration in vivo.”

According to the investigators, the lack of correlation of NAWM MTR with disability measured using the EDSS may reflect small sample size and insufficient power to assess such correlations. Furthermore, the sample contained mostly RRMS patients with a low EDSS.

“Additional research should include characterization of the existing models of MS with similar techniques to determine whether the cortical changes are featured in these important but limited models of MS,” Dr. Mahad said.

To test the relationship between cortical lesion load and disability, Dr. Mistry recommended a larger MRI study with longitudinal follow-up enrolling more participants with PPMS and SPMS. If the association is confirmed, future therapeutic trials need to address it.

“Current treatments are not targeting the tissue compartment driving progression in MS,” Dr. Mistry said. “Some studies suggest cortical lesions are caused by lymphoid follicles resident in the central nervous system (CNS), beyond the blood-brain barrier. Future therapies specifically targeting these CNS lymphocytes may be the first-ever treatments to slow or arrest progression after it has started.”

“If [corticocentric] treatments work well enough to allow repair mechanisms to overtake inflammation, the prospect of disability reversal is raised,” Dr. Mistry concluded. “The current state of disease modification therapy in MS amounts to relapse reduction if possible, then hoping for the best. If (as I believe) this is not targeting the real cause of disability progression, our approach needs to change.”

She noted that compared with lower field MRI, the main contributions from the use of UHF MRI in characterizing MS-related pathology include:

“At present, UHF MRI is mainly used to improve our understanding of different aspects of the pathogenesis of MS,” said Dr. Mainero, who is also an assistant professor of radiology at Harvard Medical School and assistant in neuroscience at MGH. “The application of UHF systems in standard clinical practice still needs to be established.”