Glutamate N-methyl-D-aspartate receptors (NMDARs) may affect synaptic transmission and plasticity, thereby modulating the severity of multiple sclerosis (MS), according to a genetic analysis in the June issue of PLOS ONE (Rossi et al., 2013). Furthermore, NMDARs appear to have contrasting effects in relapsing and primary progressive forms of the disease. 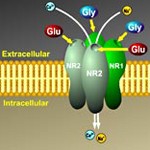 “In [MS], NMDAR-dependent adaptive plasticity and excitotoxic neurodegeneration could both play a role in disease expression,” wrote Silvia Rossi of Università Tor Vergata, Rome, Italy, and colleagues. “In fact, in relapsing-remitting MS (RR-MS), a certain degree of inflammatory white matter damage is generally well tolerated, and reversible or irreversible clinical disability only appears when the adaptive abilities of the brain fail. Instead, in primary progressive MS (PP-MS) accumulating disability reflects the progression of neuronal damage without any compensation by plasticity mechanisms exhausted during clinically silent inflammatory episodes.”

To examine the role of NMDARs in MS, the investigators studied 691 subjects with MS and specific allelic variants of the NR1 or NR2B subunit gene of NMDAR. After assessing the impact on neurological disability of four specific single-nucleotide polymorphisms (SNPs) in these genes, they replicated the analysis in an independent verification sample of 1548 subjects with MS.

At equal values of age, disease duration, onset type, sex, and other SNPs, the probability of having an Expanded Disability Status Scale score of 2.0 or more decreased as the number of copies of the T allele in rs4880213 increased, based on logistic regression. The C allele of rs4880213 was associated with reduced cortical excitability mediated by NMDAR. Subjects homozygous for the C allele (CC) had increased likelihood of having more disability compared with CT or TT subjects.

Among patients with RRMS, the CC group had greater MS severity. In contrast, among patients with PPMS, clinical worsening was more pronounced among TT subjects. Compared with CT or TT subjects, CC subjects with RRMS had lower mean time to first relapse (but not to an active MRI scan) and a greater number of subjects with at least two clinical relapses in the first 2 years of the disease. Subjects carrying the T allele had a lower percentage of relapses associated with residual disability. However, presence of the C or T allele of this SNP did not affect MRI lesion load in RRMS patients.

In the TT group of PPMS patients, axonal and neuronal degeneration on optical coherence tomography was more severe than in those without the T allele. However, in RRMS patients with the T allele, reduced retinal nerve fiber thickness had less impact on visual acuity.

Among RRMS subjects, the T allele was associated with better preservation of neuropsychological function on Rao’s brief repeatable battery. PPMS subjects with the T allele of the rs4880213 SNP also had better cognitive function than their counterparts without the T allele, suggesting some residual NMDAR-dependent plasticity in PPMS.

Study limitations include demographic and clinical differences between the discovery and replication cohorts, but multiple logistic regressions helped to reduce potential confounding.

“Signaling through glutamate NMDARs enhances both compensatory synaptic plasticity and excitotoxic neurodegeneration, impacting in opposite ways on RR-MS and PP-MS pathophysiological mechanisms,” the study authors wrote. “… [T]he results of the present study indicate a complex role of NMDARs in MS, and provide potentially useful information for the optimization of symptom-relieving and neuroprotective strategies in this disabling neurological disorder.”