Researchers presented a new mouse model for fatigue at the 2014 Society for Neuroscience meeting. The model is the first of its kind and works by manipulating the pro-inflammatory cytokine interleukin-1β. 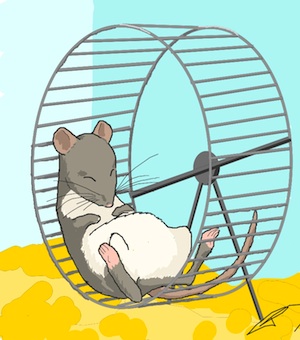 There’s a new animal model coming down the pike that may be of use to multiple sclerosis researchers. At the Society for Neuroscience (SfN) annual meeting in Washington, D.C., researchers announced that they have developed a new mouse model for fatigue. This is the first mouse model to isolate fatigue from other symptoms.

Fatigue is said to be the most common and debilitating symptom of multiple sclerosis. It’s characterized less as sleepiness and more as an inability to function normally, even if the motivation is there.

“Surprisingly, this is an underrepresented area of research,” Mary Harrington, Ph.D., of Smith College said at an SfN press conference. “There is little to no understanding of what is the underlying neurobiology of fatigue.”

The researchers began by activating the pro-inflammatory cytokine interleukin-1β (IL-1β) in young, middle-aged, and aged female mice. The animals demonstrated signs of fatigue, without any other signs of sickness (Bonsall et al, 2014). Middle-aged (6 to 12 months old) and aged mice (18 to 24 months old) almost completely stopped voluntary wheel-running compared to their baseline activity. They did not, however, show signs of fever, muscle ache, or anhedonia (decreased pleasure-seeking activity). The researchers saw no significant change in the young (3- to 5-month-old) mice.

The researchers also found that the treatment did not seem to act upon the neurotransmitter orexin to induce fatigue. Orexin is thought to mediate arousal and wakefulness. Unsurprisingly, the mice also did not respond well to medications that work on the arousal system, such as modafinil (Provigil, Teva Pharmaceuticals) or methylphenidate (Ritalin, Concerta, and others), a drug commonly prescribed to treat attention deficit hyperactivity disorder.

In an interview with MSDF, Harrington, whose background is in studying circadian rhythms, said that patients often don’t report fatigue to their physician because it seems hopeless. Currently, no effective treatments exist for fatigue.

One possible reason that it’s been so difficult to get a handle on the biology of fatigue is that researchers may have been looking in the wrong place. It could be that fatigue originates in the immune system, not in the nervous system. Harrington pointed out that the diseases characterized by fatigue have one major common denominator: inflammation. Harrington said that she decided to target IL-1β after reviewing the literature and work done in a model for fatigue used in rats.

In the rat model, researchers give the rats a compound called PolyIC. “It’s a viral mimic so your body thinks you’re having a viral infection,” Harrington said to MSDF. “When researchers tried to reverse the effects of PolyIC they realized that they could do it with a blocker of interleukin-1β.”

Harrington said that more work needs to be done to verify her work. But she hopes the model can help illuminate key players in generating fatigue and can be used for drug screening. She said she hopes that MS researchers will use it to help defeat the most debilitating symptom of MS.

Harrington’s work was supported by NIH grant R21NR012845. She reported no conflicts of interest.

Sumowski JF, Leavitt VM. Body temperature is elevated and linked to fatigue in relapsing-remitting multiple sclerosis, even without heat exposure. Archives of Physical Medicine and Rehabilitation 2014; 95: 1298-1302.

Fatigue is a complex symptom experienced by patients with MS that likely involves a combination of immunological and neuronal influences.  While previous research has identified the pro-inflammatory cytokine IL-1 as an important mediator of diurnal sleep drive and sickness behaviors in rodent models (including fatigue and excessive sleepiness), the work by Harrington et al provides new data regarding effects that IL-1 may have on specific neuronal targets associated with pathological symptoms of fatigue, and other clinical factors that may influence this response.  Data from this early research could eventually improve our understanding of this highly prevalent and debilitating symptom among patients with MS, and facilitate the development of better treatments for fatigue.