Klotho is known to play a role in a number of age-related diseases, such as Alzheimer’s. New research suggests that a small molecule that boosts production of this protein may enhance maturation of OPCs into myelin-producing cells. 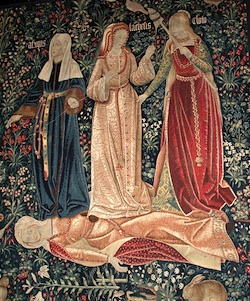 According to Greek myth, Clotho was the youngest of the three Morai, the trio of fates responsible for spinning the “thread of life.” She was responsible for determining the time and location of everyone’s birth and had a hand in deciding the fates of both gods and humans.

Clotho might be a little-known Greek goddess, but her legacy lives on as the namesake of the “long life” protein, klotho. The protein was discovered in 1997 in Japan and got its name in age-related research when Makoto Kuro-O, M.D., Ph.D., now at the University of Texas Southwestern Medical Center and his colleagues discovered that mice lacking the gene for klotho aged faster and died sooner than their wild-type cousins (Kuro-O et al., 1997).

Now researchers have implicated klotho in remyelination. At the late-breaking news session at the joint ACTRIMS-ECTRIMS conference in September, Carmela Abraham, Ph.D., of Boston University presented research from her group suggesting that klotho could be harnessed as a powerful remyelinating agent (Abraham et al., 2014).

Researchers have linked a lack of klotho—which is mainly expressed in the kidney and brain—to numerous diseases and processes related to aging, such as cognitive decline, osteoporosis, infertility, and atherosclerosis in mice and people. On the other hand, klotho’s overexpression in mice leads to 30% longer lifespans and healthier mice (Wang and Sun, 2009; Chen et al., 2013). Many have speculated at the potential use of klotho as an anti-inflammatory and tumor-suppressing agent.

“I had been studying the normal aging of the brain for decades, to try to understand why people, monkeys, rats, and mice start to have cognitive decline,” Abraham said in an interview with MSDF. But when she noticed that normal aged rhesus monkeys had reduced klotho levels and abnormal myelin (Duce et al., 2008), she began to wonder whether there was a connection between klotho, myelin, and multiple sclerosis.

In 2013, Abraham’s group published a paper examining klotho’s effect on the maturation of oligodendrocyte progenitor cells (OPCs) into myelin-producing oligodendrocytes. In that study (Chen et al., 2013), Abraham and her colleagues found that adding klotho enhanced OPCs’ ability to differentiate into mature oligodendrocytes in cell culture. Further examination through western blot analysis suggested that klotho exerts its effect on OPCs through the Akt and ERK1/2 pathways, signaling pathways known to be involved in several cellular functions, including cell proliferation, growth, and OPC maturation.

“Akt is critical for myelination,” said Akiko Nishiyama, M.D., Ph.D., of the University of Connecticut, Storrs, in an interview with MSDF. Nishiyama’s lab studies OPC maturation. “People are now starting to look at what’s coordinating the function of these molecules. And it seems that klotho is one of the candidates that can coordinate multiple signaling pathways. So in that regard I find it very exciting and promising as a therapeutic pathway.”

Though researchers often observe no lack of OPCs at lesion sites in the central nervous system of people with MS, they remain vexed as to why these progenitor cells stubbornly endure in their undifferentiated state. Identifying molecules that can induce OPC maturation is of critical importance to the path toward remyelinating therapy, Nishiyama and Abraham said.

In the next phase of Abraham’s research, which she presented at the MS meeting in Boston, she and her group examined how extra klotho enhanced remyelination in the cuprizone mouse model. The researchers exposed seven 10-week-old klotho-overexpressing mice and four wild-type mice to cuprizone and gave them injections to inhibit OPC proliferation for 6 weeks. They then allowed the mice to remyelinate for 3 weeks and examined a section of the corpus callosum for progress.

Using high-throughput screens, Abraham’s team investigated numerous small-molecule compounds from the Laboratory for Drug Discovery in Neurodegeneration library at Harvard University that act on the promoter region for the klotho gene. In her presentation at MS Boston, Abraham said that a molecule she referred to as “compound A” is her group’s best candidate so far.  In the most promising data, Q-PCR demonstrated that compound A induced approximately 3.5 times the upregulation of klotho in the brain, but only about 1.5 times upregulation in the kidney after 48 hours.

Any drug enhancing klotho is likely to lead to several side effects, given the ubiquity of klotho in multiple organ systems, so it’s important to search for compounds that will specifically act on klotho regulation in the CNS. An abundance of klotho seems to improve health, however, at least in mice, so it’s possible that the side effects may not be deleterious.

“This is interesting research,” said Jerry Wolinsky, M.D., of the University of Texas Health Science Center at Houston in an interview with MSDF. “It’s a very nice way of putting together a collaborative team. It’s a very appropriate use of the newer tools for drug discovery in basic research. That kind of translational approach is what I think is real translational medicine.”

Despite the accolades, Abraham admitted that the current tough times for research have not spared her lab: “I’m at the stage between basic science and the translational science, where it is very difficult to get funding.”

Yet Abraham’s stage of translational research—straddling the line between basic science and clinical trials—is critical to the advancement of medicine overall, Wolinsky said. “Her work is at a stage of development where it could be phenomenal or it may not ever be talked about very much anymore sometime in the future.”

When asked if she thought klotho might be too good to be true, Abraham said that even she is consistently surprised by klotho’s apparent power. But “the results are the results,” she said.

If klotho lives up to its namesake, it will spin a thread of hope for many patients with MS and remyelination therapy.

Abraham received financial support for this research from The Alzheimer’s Drug Discovery Foundation.