EDSS Alternative in an iPad

A study demonstrates that an iPad app can accurately gauge walking, balance, manual dexterity, visual acuity, and a measure of cognition in people with MS

Doctors, researchers, and patients could all benefit from an easier way to quantify MS disability. Now, scientists report that they were able to conduct performance tests on MS patients using an iPad and an app they designed (Rudick et al., 2014). The system, which the team described in the Journal of Visualized Experiments, might increase the number of doctors who can apply such measurements and could eventually allow patients to test themselves at home. 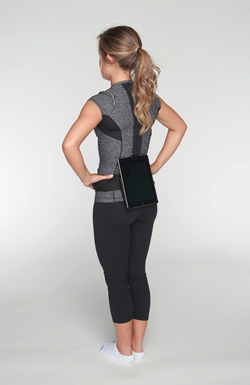 “I think this is a really exciting and elegant step forward,” said Jeffrey Gelfand, M.D., an assistant professor of neurology at the University of California, San Francisco, who wasn’t involved in the study. “This is the beginning of the next phase of bringing performance testing into the MS clinic.”

Although researchers have proposed several methods to quantify MS disability, for more than 30 years the standard has been the Expanded Disability Status Scale, or EDSS (Kurtzke, 1983). The scale runs from 0 to 10 and is based on an evaluation by a neurologist or other expert. For patients at the lower end of the scale, scores depend on whether certain functional systems, such as the bladder or the visual system, are impaired. For patients with more severe disabilities, ratings depend on factors such as how far they can walk without help and whether they are bedridden.

The EDSS has figured in thousands of studies and almost all clinical trials of MS treatments. “It’s been critical for getting 10 drugs to patients,” said Richard Rudick, M.D., former director of the Mellen Center for Multiple Sclerosis Treatment and Research at the Cleveland Clinic in Ohio and now a vice president for development sciences at Biogen Idec in Cambridge, Massachusetts.

But the EDSS has taken its lumps over the years. “It’s the measure we most love to hate,” said Rudick, who was lead author of the iPad study. One complaint is that the scale is not linear. So if a patient’s score increases from 1 to 2, that doesn’t represent the same amount of physical decline as an increase from 6 to 7—a problem that limits the statistical analyses researchers can perform on EDSS data (Goldman et al., 2010). Critics have also knocked the EDSS for leaning heavily on walking ability. “We all acknowledge that there are flaws and we should be able to do better to measure disability for MS,” Gelfand said.

In the mid-1990s, the National Multiple Sclerosis Society asked experts to do better and devise an alternative that would be applicable to clinical trials (Rudick et al., 1997). A task force chaired by Rudick suggested a three-part assessment, the Multiple Sclerosis Functional Composite (MSFC). The first edition of the MSFC gauged walking ability—indicated by how long it takes a patient to walk 25 feet—and manual dexterity, measured by how long it takes the patient to fit nine pegs into holes on a wooden or plastic board. The MSFC also included a test of cognitive ability in which patients add up numbers as a voice recites them.

Although the first MSFC version improved on the EDSS in some ways and has been incorporated into most clinical trials since its introduction, it didn’t win over everyone. Regulatory agencies like the U.S. Food and Drug Administration haven’t accepted it, in part because the meaning of the scores is unclear. Moreover, skeptics grumbled because it didn’t factor in patients’ visual ability. Responding to these criticisms, a second task force in 2012 recommended an upgrade, sometimes termed the MSFC4, that added a visual acuity test and replaced the procedure for gauging mental processing speed (Ontaneda et al., 2012).

Neurologists are keen to use the MSFC4 to evaluate their patients, Rudick said, but there’s a catch: A technician has to administer the test. He and colleagues decided to determine whether an iPad could capture and store the data instead. “There’s so much interest in the MSFC by neurologists we thought it would be nice to use technology to make it easier to test patients,” Rudick said.

For the new study, the researchers created an app that scores patients on five disability measures, four of which are part of the MSFC4. “We are trying to use this [the tablet] to objectively quantify cognitive function and other functions in patients with MS,” said co-author Jay Alberts, Ph.D., a biomedical engineer at the Cleveland Clinic Lerner Research Institute in Ohio.

Subjects perform two of the tests with the device strapped to their lower back (see video). In one test, the iPad times them as they walk 25 feet. The other test gauges their stability and requires them to stand for 30 seconds with their eyes open and then for 30 seconds with their eyes closed. The data recorded by the iPad allows researchers to determine whether the subject’s center of gravity shifts during the test.

Patients also attempt the nine-hole peg test on the iPad, inserting pegs into holes in an overlay that fits over the screen. For the visual acuity test, the device displays rows of letters like an eye chart, and it records patients’ responses as they discern the letters at low contrast. The final test is a cognitive assessment that asks users to match numbers with abstract symbols using a key presented on the screen.

The researchers tried out the iPad version of the MSFC4, which they term the Multiple Sclerosis Performance Test (MSPT), on 49 control subjects and 51 MS patients. They determined how well the tests for walking speed, manual dexterity, visual acuity, and processing speed captured patients’ degree of disability.

All four of the tests could discriminate MS patients from controls, the team found, and they usually identified patients with more serious disease. People who had progressive MS scored higher on the walking and arm function tests than did patients who had a relapsing form of the illness, for example. And the results on all four tests separated people whose EDSS scores were 4 or above from people whose scores were below 4. Rudick and colleagues also found that scores on the MSPT closely matched results obtained by a technician who performed the MSFC4 without using the tablet, suggesting that the iPad-based tests reflect the patients’ condition. The researchers didn’t analyze the results of the balance test, Rudick said, because they are still trying to find a way to boil down the large amount of data the iPad collects.

One potential advantage of the iPad-based system, Rudick said, is “the possibility that patients can do this testing all by themselves.” If patients could run the tests at home, that might improve diagnosis and treatment for people who live in rural areas and don’t have access to specialists who can administer the tests.

For researchers, a benefit of the iPad-based tests is that patients’ scores can go directly into a database, Rudick noted. Researchers don’t have to worry about transferring the data and checking to make sure the values were entered correctly. In addition, Alberts said, the tablet can gather more data that might provide a clearer indication of the patient’s condition. During the walking test, for instance, the device can record not just patients’ times but also their movements as they attempt to remain balanced. “It’s a more precise measure of gait and postural stability,” Alberts said.

“The iPad-based approach simplifies, improves, and standardizes testing, and makes it easier to record and store data,” Gelfand said. “I’d be excited and eager to start testing it with our patients.”

The researchers are still pondering some practical issues. For example, potential users would need specialized equipment—a belt that can hold the device during the walking and balance tests, along with a screen overlay for the peg test—and the app. Alberts said the team hasn’t decided how to make the app available. “It probably isn’t going to be an app in the App Store,” he said. But clinics and hospitals might be able to buy it, or the researchers might give it away.

What the researchers need to determine now, Gelfand said, is “how easy is it to adopt in a busy clinic setting.” The team is planning to do just that by distributing the iPad-based system to five to 10 clinics in the U.S. and other countries, Alberts said.

Whatever the results of this field trial, Gelfand and Rudick agree that the EDSS won’t be fading away soon. “I stopped predicting the demise of the EDSS 15 or 20 years ago,” Rudick said.

Novartis Pharmaceutical Corporation provided some of the funding for the project.

Jeffrey Gelfand receives research support from the U.S. National Institutes of Health; he has received compensation for medical legal consulting and has received honoraria from the Massachusetts Medical Society for writing for Journal Watch Neurology.