Lenaldekar blocks inflammation, demyelination, and axon degeneration in a mouse model of MS

Multiple sclerosis and acute lymphoblastic leukemia (ALL) have something in common: too many T cells. In MS, those T cells are directed against components of myelin. In ALL, immature T cells build up. So it makes sense that compounds that would lower the number of errant T cells in leukemia might also do so for MS.

That’s exactly what researchers reported in the April 2014 issue of PLOS ONE (Cusick et al., 2014). But the shared characteristic of the two diseases—which are otherwise very different—nearly derailed the development trajectory of the MS drug candidate, Lenaldekar (LDK). Fortunately, it’s back on track, with very promising results in a mouse model.

The story of LDK (or more formally, 1H-indole-3-carbaldehyde quinolin-8-yl-hydrazone) began nearly a decade ago, when Nikolaus Trede, M.D., Ph.D., a pediatric oncologist with a passion for, and a Ph.D. in, immunology, fell in love with a 1-millimeter-long transparent fish. 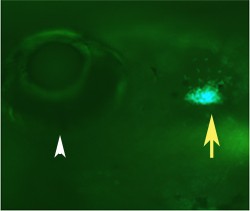 “The zebrafish has emerged as a premier system for drug discovery. Several small molecules found to be active in zebrafish have been studied in clinical trials. We are at the beginning of an era in which new pathways or chemicals will rescue disease models and lead to new therapeutics,”  Leonard Zon, M.D., Ph.D., told MSDF. Zon is Grousbeck Professor of Pediatric Medicine at Boston Children's Hospital and a Howard Hughes Medical Institute investigator. Trede did his postdoctoral work in Zon’s lab, but Zon was not involved in the LDK study.

At the University of Utah in 2004, Trede began using zebrafish to interrogate a small-molecule library in an effort to identify compounds that kill immature T cells with arrested development. This served as a stand-in for leukemia. He linked the jellyfish gene for green fluorescent protein (GFP) to a zebrafish T cell promoter gene to mark the T cells, which develop in the thymus, easily seen behind a zebrafish’s eye. “Whenever a T cell lights up green, it indicates very immature T cells,” Trede, now medical director at Acetylon Pharmaceuticals in Boston, told MSDF. A compound able to kill immature T cells would squelch the green signal.

Trede set up microscopes in the lab to examine the animals. “The fish swim in 96-well plates, and two green dots represent the thymus. We put in 26,000 molecules to see which ones extinguish the green fluorescence. It was all done by hand. We had grad students, undergrads, even legions of high school students helping,” Trede recalled.

Twenty-one candidate compounds dimmed the green without killing the fish. And the fact that the molecules traversed an epithelial membrane to hit the targeted T cells indicated the compounds’ bioavailability.

Next, the researchers tested the 21 compounds on younger zebrafish to be sure they didn’t arrest the cell cycle. Sixteen did. That left five viable drug candidates. Only one of the five had an effect on human T cells, and it became LDK.

The 1-in-26,000 compound that emerged from the zebrafish screen deserved a thoughtful name. “We wanted something to indicate a drug that would be mild and soft with no side effects,” Trede said. “Len” comes from Leonard, Trede’s mentor, and also from Lenis, which means mild, gentle, or soft in Latin. “Al” stands for aldegundis, meaning “guardian against cancer” and “de” represents the Latin desumo for “selective.” “Kar” is from the Japanese kariteimo, for “guardian of children,” acknowledging Trede’s young leukemia patients.

LDK’s debut early in 2012 in the journal Blood announced the compound’s “selective toxicity against leukemia” (Ridges et al., 2012). But Trede had a possible dual use for LDK at the back of his mind right from the start: treating multiple sclerosis.

“I knew that any compound we might pull out of a library would work not only against immature proliferative cells like leukemia but also against autoimmune disease T cells that might be activated but not normal,” Trede said. In fact, he’d asked Robert Fujinami, Ph.D., a professor of pathology at the University of Utah, in 2005 if he’d test leukemia drug candidates for effects in MS.

But Trede was puzzled when obtaining funding to extend development of LDK to MS proved oddly difficult—until someone at a company in Salt Lake City told him the glitch wasn’t the science, but the patent that the university had taken out. “The patent says that the compound is used in patients who have ALL [acute lymphocytic leukemia] and MS. The company wanted to work with us but when they looked at the patent, said the compound is not usable,” Trede recalled. The use of “and” instead of “or” implies that a clinical trial would have to test people suffering from both disorders. Trede now reads patent language much more carefully.

Another hindrance was that the screened compounds came from a commercially available library, which was not attractive to industry even without the patent problem, Trede added.

But there was a way around the patent barrier: Identify the target. “A screen gives you the molecule that is biologically active, but you don’t know how it exerts its effect. Another company has a target, then develops a molecule but doesn’t know if it is toxic in the body,” Trede said. Finding the target, and therefore the mechanism, would suggest ways to work around the patent using different molecules. And elucidating the mechanism is where Fujinami’s group entered the picture.

Fujinami’s team extended analysis of LDK to the autoreactive T cells against myelin components that lie at the heart of MS. They used a relapsing-remitting EAE mouse model sensitized with peptide 139-151 of myelin proteolipid protein, and human cells. This “part 1” of the story appeared in 2012 in the Journal of Neuroimmunology (Cusick et al., 2012).

First, they showed that LDK inhibits recall responses of human T cells to infections such as influenza and hepatitis C, using those doses to treat mice at the start of the second attack. “Oftentimes people studying new drugs will start treating animals before they have an attack. That’s not a good comparison to what would happen in patients with MS. Nobody goes to a physician before they have clinical disease,” Fujinami said. Results were dramatic. “He showed that when you treat mice after the first bout, before the start of the second, you can abolish the disease,” Trede said.

Because Trede already suspected that the insulin-like growth factor 1 receptor (IGF-R1) was a target, that’s where the Fujinami team looked. IGF-R1 is important for survival of oligodendrocytes, the glial cells that myelinate axons in the central nervous system (Chesik et al., 2007).

“We showed that the compound does react and bind to IGF-R1 and there is a signaling pathway involved. When we block the pathway, we can suppress the T cell response to myelin,” Fujinami explained. The team used antibody to the receptor (αIR3) to compete for and block LDK’s action. In addition, the intervention blocks production of interleukin 2, the cytokine that drives T cell proliferation. “This finding confirmed that the drug works well in inhibiting the T cell response to myelin antigens,” he added.

Treated mice had less inflammation, demyelination, and damage to spinal cord axons than untreated controls, although the relationships among these effects aren’t clear. “If we can show the compound is an anti-inflammatory as well as neuroprotective, that would be a very nice observation,” Fujinami said.

An MS drug that works through the IGF-R1 pathway would be novel, but that might not be the only way that LDK operates. Experiments in knockout mice and zebrafish, proprietary and not yet published, reveal a second target, Trede said.

All in all, LDK, the drug nearly sidelined thanks to a not-quite-right patent claim, shows great promise. “The work showing LDK has activity that suppresses T cell proliferation and responses through an IGF-R1 pathway is exciting and could lead to a novel treatment for autoimmune diseases,” Zon concluded.

Robert Fujinami is an editor at PLOS ONE. Nikolaus Trede received funding from the William Lawrence Blanche Hughes Foundation, has stock options from Ariad Pharmaceuticals, and is employed by Acetylon Pharmaceuticals. Dr. Zon and the other authors have no disclosures.