SAN DIEGO—Apolipoprotein A1 (ApoA1), a major component of high-density lipoprotein (HDL)—otherwise known as good cholesterol—provides anti-inflammatory protection against several heart and brain diseases. New work presented at this year’s meeting of the Society for Neuroscience in San Diego suggests that it could also protect against MS symptoms. 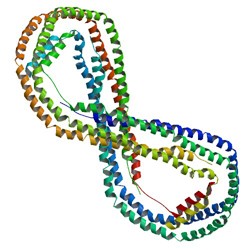 Lidia Gardner, Ph.D., at the University of Tennessee Health Science Center in Memphis, Tennessee, presented evidence that levels of ApoA1 were lower in patients with MS than in healthy controls. Gardner and her colleagues, including senior author Michael Levin, M.D., analyzed samples of patients’ serum and blood using antibodies against ApoA1 and found that patients with relapsing-remitting MS had about 25% lower levels of ApoA1 than controls. Patients with secondary and primary progressive MS were even more depleted, with 50% and 75% less ApoA1 than controls, respectively, suggesting a relationship between the anti-inflammatory protein and MS severity.

The trend was confirmed with an enzyme-linked immunosorbent assay for ApoA1, which showed that healthy people had about 2.3 grams per liter (g/L) of ApoA1 in the blood, whereas the level dropped to 0.6 g/L in patients with primary progressive MS. Each group included approximately 50 subjects.

Would ApoA1-deficient mice have worse symptoms than wild-type mice in the experimental autoimmune encephalomyelitis (EAE) model of MS? To answer this question, Gardner and her colleagues used a strain of mice that express about fourfold less ApoA1 than normal. “We didn’t want to use knockout animals, because MS patients do not lack this protein, they just have less of it,” Gardner told MSDF. Mice normally begin to show signs of EAE about 2 weeks after being injected with myelin oligodendrocyte glycoprotein. Accordingly, 17 days after injection, wild-type mice displayed early signs of EAE, like a stiff tail, but, Gardner said in a press conference, “they did not have any trouble moving around.” The ApoA1-deficient mice, on the other hand, were already severely affected by then. “These mice were totally paralyzed in their rear legs and tail,” Gardner said, “and they had more lesions and neuronal degradation in the spinal cord and brain” than the wild-type mice.

ApoA1protects against inflammation as part of the HDL complex by blocking interactions between T cells and monocytes, but the study did not address how exactly ApoA1 protected the mice against EAE. In future work, Gardner plans to analyze ApoA1 pathways and how they might be regulated in MS.

A role for ApoA1 in MS presents an enticing opportunity to affect the disease, because cholesterol levels can be manipulated to some degree with drugs such as statins. Because statins are known to reduce inflammation as well as cholesterol, those drugs have been tested in MS patients, but those studies have been controversial. “Some have shown that statins benefit MS patients, while others showed that disease got worse when statins were added to the standard MS immunotherapy,” Gardner told MSDF. Gardner was careful to point out at the press conference that “we want to increase ApoA1 levels specifically, not just HDL.” She added, “We need to concentrate on a different biological pathway from statins for potential drugs that can increase ApoA1.” Other interventions such as diet and exercise can also affect ApoA1 levels, another area that Gardner hopes to interrogate in future studies.

Neither Gardner nor Levin had any disclosures to make. The research was supported by the National Multiple Sclerosis Society.